“We start out as a bunch of people, but we end up as one” 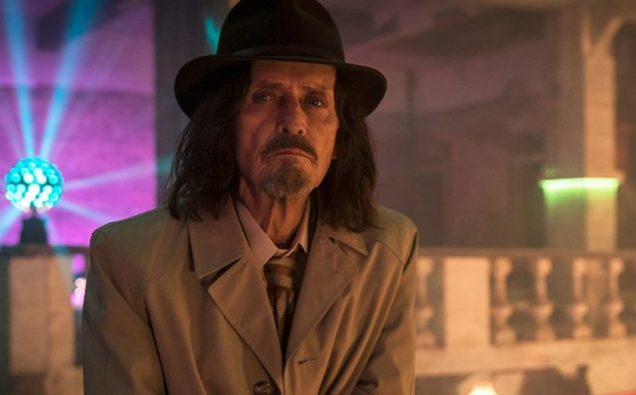 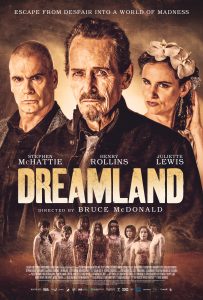 Trippy, weird, and jazzy cool, Dreamland is aesthetically wonderful, but not a film to spend a lot of time trying to make sense of. Enjoy the crazy, blood-soaked ride, throw logic out the window, and just dream a little horror dream with the always stellar Stephen McHattie.

In the end, instead of applauding, I felt like I should snap my fingers like I was a beatnik in a coffee shop.

After watching Bruce McDonald’s Dreamland, I had the same odd fuzzy feeling you get right as you wake up and cannot quite grasp all the details of a nightmare. What I saw was endlessly interesting, and often funny, but I must admit, I am not quite sure what the point of the film was. The logic in most dreams rarely make sense, so it’s possible that is exactly the point. I have had similar brain melts after watching David Lynch classics. While other people around me are raving over its greatness, I’m there going “What just happened?”

Official Synopsis: On the night of one of the strangest weddings in cinema, a crazy gang boss hires a stone-cold killer to bring him the finger of a fading, drug-addicted jazz legend. 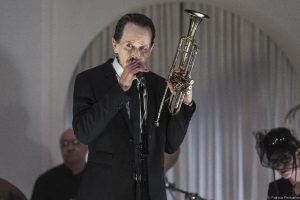 Steven McHattie (Pontypool, Come to Daddy) plays a hitman named Johnny, and a talented trumpet player who goes by the name The Maestro. An odd choice for the same actor to play two vastly different guys who interact with each other and that no one seems to notice they look alike. McDonald makes no attempt to have their faces look different, just their hair. An experienced genre actor, McHattie does the heavy lifting, by creating two extremely contrasting characters who are oddly not that hard to separate, even when they are talking face-to-face. Johnny is a tough as nails hitman, and Maestro is a drug-addled heroin junkie and trumpet virtuoso.

Though vague, the story is still a compelling vision full of outrageous characters. 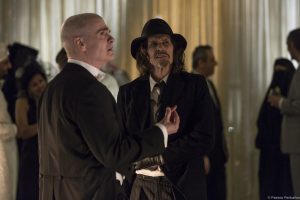 Johnny works for the sleazy Hercules, (Henry Rollins) a villain right out of a comic book, who runs prostitution, drug dealing, and a human trafficking ring from a local strip club. He recently sold some heroin to the Maestro, who could not remember his name. This was a horrible slight to the narcissistic Hercules, who asks Johnny to remove the Maestro’s pinky just as a small punishment. Johnny can kill with no qualms, but a finger, that does not seem right.

The assassin’s latest job for Hercules was to do away with some creepy foreign pedophiles. Johnny considered them monsters, and he killed them no problem, only to find out that they were Hercules’ competition and now the slimebag is in the child prostitution business. This does not sit well with our hitman; even he has rules. 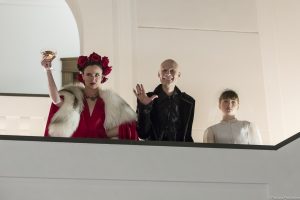 In the dark and twisted story, Maestro is set to play at the wedding of the local Count, who is marrying a young girl he hand-picked, and Hercules had abducted. This 14-year-old bride-to-be is Johnny’s neighbor and at the request of the girl’s little brother, he makes it his mission to save this innocent from the evil Count who, oh yeah, happens to be a vampire.

As described in the synopsis, this is going to be one seriously strange wedding. Juliette Lewis plays The Countess and we watch this weird and ludicrous woman setting up her version of the perfect wedding, complete with young girls and lots of drugs for the guests. She was frantic and fantastic in the role; I always adore her the most when she is at her most manic. 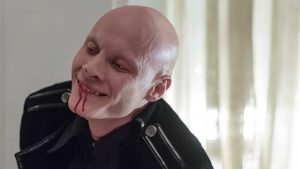 The groom, referred to mostly as The Vampire, was one of my favorite characters. Tómas Lemarquis reminds me of Nosferatu or even a What We Do in the Shadows type vamp. The little sucking sounds he made cracked me up and I could not get enough of his freakish persona.

Also entertaining was the squad of hitmen that roamed the streets, who worked for the Vampire Count. Little boys in suits, heavily armed, made sure the bride got to her wedding in time.

Very surreal; but what wasn’t in this film? 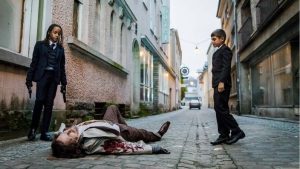 With a soundtrack of jazzy trumpet music mixed with discordant sounds, the backdrop is like something out of a bad acid trip and the film almost starts to make sense, if I was tripping.

At one point everyone, including all the children, have guns. The blood splatters brightly in contrast to the pristine white décor, and the conclusion is one of the most extraordinarily grotesque in cinema history. I’m not sure if I loved it or not- but I certainly enjoyed the gore-filled watch!

I adored all the actors and it’s important to look at all the background characters (especially during the wedding reception) and all the little side stories. Everyone involved was 100% outlandishly wonderful! 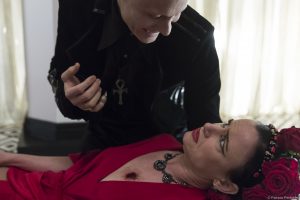 A fantastical nightmare with a dash of humor and irony, Dreamland takes us into a bizarre world and drops us off right in the middle. This is a film where you must buy into the strange narrative and just let yourself go. I did and had an entertaining and interesting journey.

When will we ever see Henry Rollins at a wedding, wearing a tuxedo again?

Uncork’d Entertainment and Dark Star Pictures will release the horror/thriller  DREAMLAND in theaters, On Demand, and Digital June 5, 2020.