‘The Dwelling’ Brings Horror Back Into the Bedroom 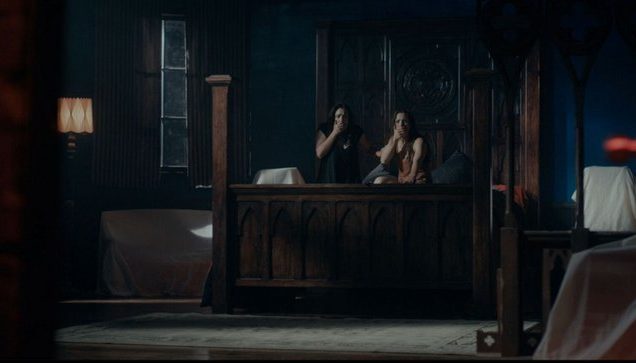 Can a tree be haunted? If it can be, and then you use that wood to create a piece of furniture, will the supernatural forces inside come along for the ride to judge you? That seems to be what is happening in Jeff Maher’s film The Dwelling. (Formally known as Bed of the Dead) 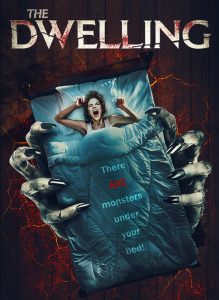 In modern mythology, there have been countless tales of trees that carried curses, where bad things happened to anyone who ventured too close. For example, for a tree that has been a place of violence or used for executions, it is said to be possible for that tree to absorb the souls who died in its branches. A tree is a living thing. When drenched with blood and used for horrible things, it makes sense that some of that evil could absorb into the tree’s very soul.

The Dwelling starts out by taking us back in history where a man is dragged to a tree by hooded figures, who cut down a decaying body and replace it by murdering and hanging him. In what seems to be a ritual of some sort, we see that this tree is used regularly for very evil purposes. Flash forward a few years to a woodsman, who cuts down the same tree, and lovingly crafts it into a beautiful gothic style bed. If it is possible for a tree to be cursed, then this one fits the description. 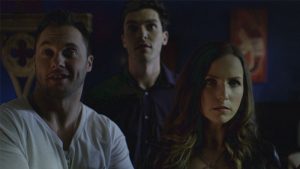 Synopsis. Two young couples out for a night of debauchery at the city’s oldest sex club, find themselves stuck on a haunted antique bed where getting off means suffering a gruesome fate.

First off, I must admit, the synopsis, and poster art didn’t make me want to see the film. I suppose that was more directed at the original title, Bed of the Dead, which sounds campy and silly. Neither of which I am glad to say applies to this film. It may not be the top movie I’ve seen in 2019, but The Dwelling is pretty darn good, so please continue to see what I have to say. I was truly surprised at how much I enjoyed the film. 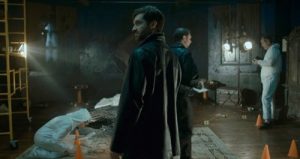 Other than the story of the birthplace of the bed, most of the movie takes place inside a room at the sex club. The story transpires over the course of just one night, in two different time periods just a few hours apart. Parallel dimensions in the same location, possibly? Here we meet Virgil, (Colin Price) a tortured, sick, alcoholic detective who is carrying the burden of a dark secret. He is called there to investigate a fire that killed four young people at the club. As we travel backward in time to see the events leading up to the fire, and then back to Virgil who is there looking at the evidence, there is almost a Twilight Zone feel in the way the story is laid out.

Sandy, (Alysa King) Ren, (Dennis Andres) Nancy (Gwenlyn Cumyn) and Fred (George Krissa) get a room at a sex club where Nancy performed in a burlesque show earlier. Talking their way into Room 18, which is rarely used, they proceed to attempt to cozy up and have a foursome. The room is covered in sheets and very dusty, but when uncovered the bed sits ominous and gorgeous in the middle of the room. Perfect for a night of passion.

With some alcohol to get things started they all jump in the bed. Turns out not to be a great idea. As the hallucinations start, the spirits attached to the bed try to take out the two couples. Upon calling the police they talk to a skeptical Virgil who informs them that he is currently investigating the death of four young people at the same sex club in the same antique bed, but hours into the future. Plagued with confusing and horrible hallucinations, they must figure what’s real and what the trick is to get off the bed before it kills them or makes them kill themselves. This antique bed has an evil agenda! 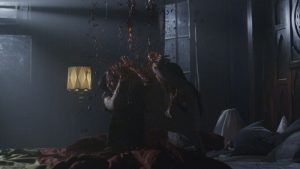 The cinematography choices were very strong and well done. When going back and forth the lighting changed from dark and creepy saturated colors while the young people were in the room, to bright, faded and stark at the burned-up investigation site. I always felt a bit claustrophobic, because there was no way to know what the spirits of the bed are going to throw at you next.

Gore factor: I do have to share- this is not a film for the squeamish- horror lovers will be in heaven. There is a plethora of blood and some great practical effects! 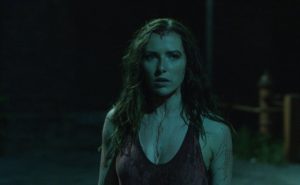 The standout for me was Alysa King as Sandy. She and Virgil carried the storyline and they played off each other well. She had a secret too, they all did, but it turned out she was very different from her other friends. The other characters were not written very strongly, and honestly, I really didn’t care if they lived or died. But Sandy had more depth, more emotion; her strength and the interactions on the phone with Virgil kept me interested in where the film was going. I’m not always a fan of a film done in flashbacks, but I loved the idea that the actions of the police detective could possibly change the outcome of what had already transpired in that room.

The Dwelling is a surprisingly great film, and even with a silly-sounding premise is worth a watch. It’s available as of Nov 26th on Digital and DVD from Uncork’d Entertainment