WARNING: Spoilers may be ahead 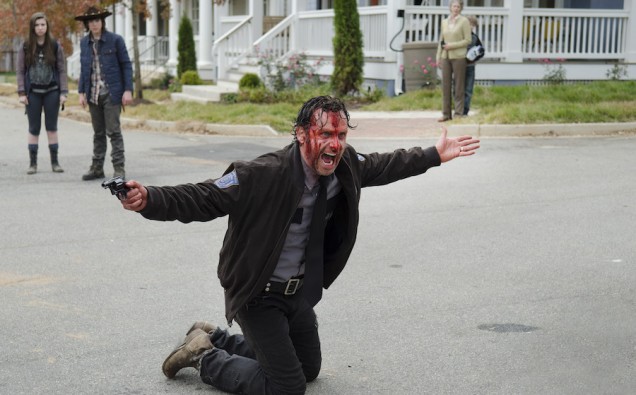 Dylan, who writes our awesome Walking Dead recaps each week, has teamed up with Melissa, another huge fan of the show to bring you some theories of how the Season 5 finale airing this Sunday, March 29th will play out. We’ve narrowed our predictions down to five different categories.

Melissa: Due to the high amount of screen time Carol and Glenn have been receiving, I do believe it could be one of them.

My prediction for Glenn would be that Nicholas kills him, which is foreshadowed in the most recent episode when Nicholas is arming himself with a pistol. If Glenn dies at the arms of Nicholas, it would give both the group and Rick a reason to take over Alexandria.

As for Carol, I am predicting her death would have something to do with Pete. Hence giving Rick a reason to finally kill Pete off. However, who knows how well this’ll work if Rick is exiled.

Or perhaps, Alexandria will be attacked by another group of people, giving them a reason to release Rick and either Glenn or Carol will die in the gunfire. However, I could completely be wrong though considering the writers of the show seem to have chosen certain main characters to remain untouched and fancy killing off side characters instead (i.e. Noah, Beth, Tyreese, etc.)

Dylan: There’s been death this past season. Recently, we lost the young and hopeful Noah. It’s been revealed that the season finale will be 90 minutes long. There’s a good chance someone else might die. My top three predictions are Carol, Glenn and Sasha. Carol has become pretty vulnerable. She could very well sacrifice herself to save someone seeing as how a fight is coming. Glenn is hopeful that they’ve found a new home in Alexandria. But seeing as how Rick lost his mind last episode, Glenn might have to lay his life on the line to protect Rick. Sasha is losing her mind. She’s posing a danger to the group. She might threaten someone and have to be killed. Or she could go after another group of walkers and die fighting. 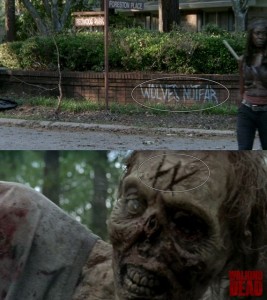 Melissa: Wolves. It will be what another group of survivors call themselves. It is a part of the comic books. These survivors I believe will not be friendly, and will attack Alexandria. And considering the way they marked up Noah’s town with the W’s everywhere, than that means they did the same thing to his town. Also, shown spray painted in Noah’s town was: “Wolves Not Fair.” An impending attack has been foreshadowed for quite some time now, with more sightings of the W’s, Daryl pointing at a light in the distance and Rick stating that the town needs to fear the outside world.

Dylan: There’s been a hidden clue during the last couple of episodes. Several walkers bore a ‘W’ on their foreheads. Last episode, Daryl and Aaron found a dead woman tied to a tree. She also had a ‘W’ on her forehead. When the gang found Noah’s home, someone left a message warning about wolves nearby. I think the ‘wolves’ are a group of raiders\killers. These ‘wolves’ are killing people nearby and it’s only a matter of time before they attack Alexandria.

3) What should happen to Nicholas?

Melissa: At this point he is a risk to the survivors, if not the whole town. I am more than certain he will be killed by some one. And as I stated earlier, I believe he will either kill Glenn, or try to and thus be killed in retaliation by some one else. 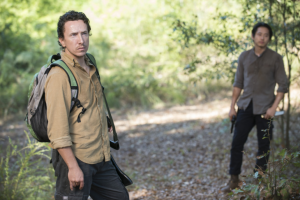 Dylan: Nicholas is a disgusting piece of scum. He ran away to save his own ass and as a result, Noah lost his life. I can’t think of a punishment he actually deserves. Deanna once mentioned that exile is a punishment handed out in Alexandria. Exiling Nicholas doesn’t seem to fit. He might actually survive. I think he should executed or used as walker bait. I’m sure Glenn has a couple forms of punishment in mind.

4) Who will we miss the most during the break? 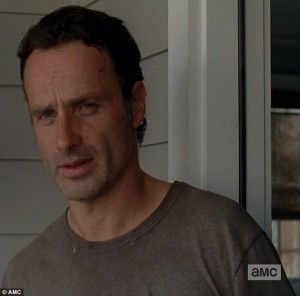 Melissa: This is a tough one for me. I think I’ll miss Rick actually.. he really has grown on me since he shaved off that animal living on his face. No, but honestly, he’s grown a lot this season even if he has gone a little mad recently. I already miss the characters like Daryl, Maggie, Eugene, Tara, Abraham, etc. because they’ve hardly had any lines or screen time this season. 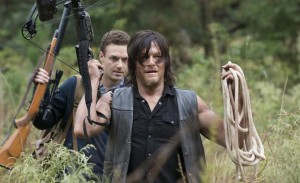 Dylan: This season is about to end. There’s so many characters, it’s almost hard to keep track. Two of the characters I’ll miss the most are Aaron and Daryl. Aaron seems like a genuine nice guy. Immediately, Rick didn’t trust him. Rick and his group have been through a lot and faced many dangers. I can understand Rick being hesitant about trusting a stranger. But Aaron seemed like someone who actually wanted to help people. He cares deeply about the people of Alexandria. I think he could be a great ally in days to come. Daryl will be missed because he’s Daryl. I think the group wouldn’t have come this far without Daryl.

5) Will they reach D.C. before the next season?

Melissa: I believe they will give up on DC for a while. I know they are very close to it because Alexandria is in Virginia. But the group has finally found the safe haven they have been looking for after a great while on the road. Personally, I am sick of seeing them walk around.. the town provides a better change of scenery for once. And there’s no way they are going to give Alexandria up. They will take it over sooner or later, and only leave if the walls are broken.

Dylan: Washington D.C. has been the final destination for quite some time. Although Eugene revealed he lied about a cure in D.C., the group decided to head there anyway. Alexandria does seem like a safe haven. Will the group still head to D.C.? If so, will they get there at the end of this season, or next season? Is D.C. a safer place than Alexandria or is it a wasteland? I’d like to see how D.C. fared during the zombie apocalypse. They’ve hyped it up so much they have to show us it at some point.

To sum things up, we definitely think something big is going to go down! Blood will be shed, and characters will be lost. Also, bear in mind the finale will be an hour and a half long so a lot can happen, including a lot of time could pass. Will it be as heart-wrenching as the midseason finale? Only time will tell!

Check back with us at the Shed next week when Dylan and Melissa recap and reflect on the season finale!