The film was released in Europe in 2014. 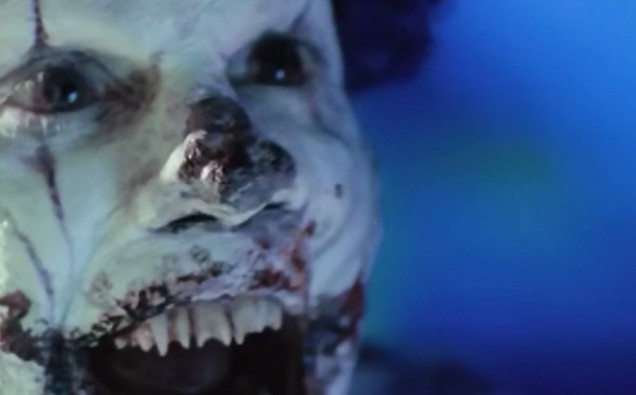 The first thrill I got when I saw THE WITCH back on February 19th came before the film even began: One of the previews for coming attractions was for the Eli Roth-produced horror movie CLOWN.  For US horror fans, this is kind of a big deal!

Official Synopsis: A loving father finds a clown suit for his son’s birthday party, only to realize that it is not a suit at all.

The coulrophobia-inducing film is an American production, produced by American filmmakers, staring an American cast (with a handful of Canadians included for good measure).  It was released overseas back in 2014; today, it’s available in Europe on DVD, Blu-Ray, 3D Blu-Ray, Digital, and even a cool-as-hell Steelebook version.  But it’s yet to appear in the USA in any form—which has been a source of consternation for fans of horror movies and Eli Roth.  It’s like, WTF?

I’ve been following this film since its inception; CLOWN’s backstory is actually pretty fucking cool!  But the fact that it’s been available for so long overseas has definitely been frustrating; it made a lot of Top 10 horror lists back in 2015 and is often discussed in numerous international online forums.  It’s become part of the zeitgeist, a fact that leaves millions of North American genre fans out in the cold. 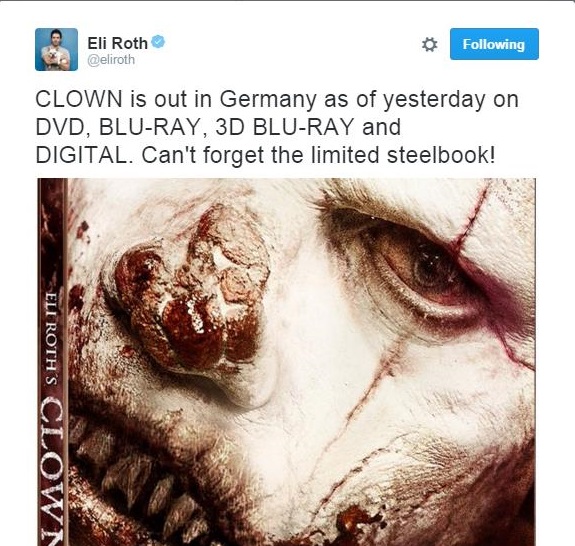 Thanks for rubbing it in, Eli!

This kind of incomplete international release is potentially dangerous for Eli Roth and Dimension Films (who owns the North American distribution rights).  Impatient fans are faced with a few obvious options.  1: Continue to wait patiently.  2: Invest in a Region-Free DVD player.  3: Watch the film online illegally.  Which do you think most horror fans have opted for?  I’m a firm opponent of digital piracy, but even I would be forgiving in a situation like this (when it feels as though a film is being held hostage).

As you might imagine, seeing the trailer for CLOWN (with a promise that the film is “Coming Soon”) excited me to the core.  So when will US horror fans finally be able to see this lauded R-Rated bloodbath?  That’s a good question!  I can’t find an official American release date for CLOWN anywhere on the internet; Upcoming Horror Movies (an extremely dependable site that’s constantly being updated), still only lists the film as “Awaiting Release”.

My excitement, therefore, is tempered with confusion and a continuing sense of frustration.  Still, I’m keeping my fingers crossed that CLOWN will finally hit US theaters in the not-too-distant future.

Are you a European who has already seen CLOWN?  Are you an American like me who shares my frustration?  Sound off in the Comments section! 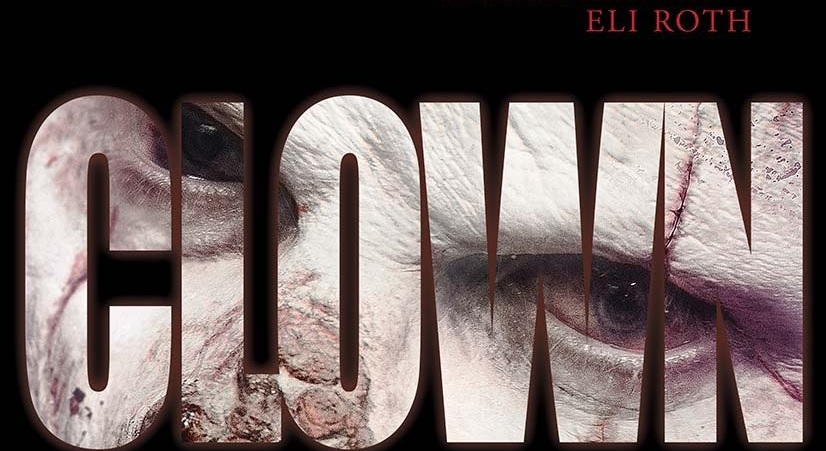