"There’s something strange going on here." 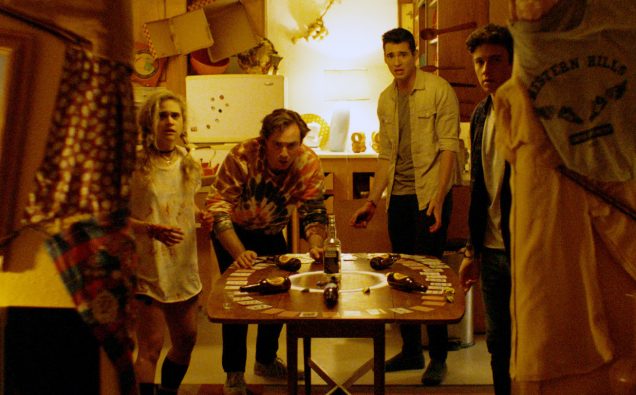 Head Count is a unique take on the teens doing stupid things to impress each other genre. Elle Callahan’s writing and directorial debut is an enjoyable, chilling tale of why you should never read aloud stuff off the internet. This psychological horror-thriller brings on the tension and gave me chills up and down my spine. 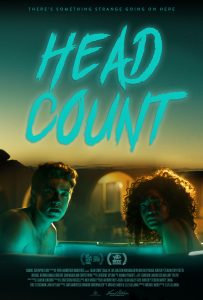 Ever since I was a kid, I tended to try anything I was told not to. I climbed trees, jumped off rocks and scrambled onto the roof of our house. I snuck one of my dad’s Pall Mall cigarettes, threw up and had the same reaction to a Budweiser beer. (Of course, beer tastes much better now, LOL) So outdoor dares and adult substances failing to give me a thrill, I decided to be the kid at every slumber party to tell the scariest and grossest stories I could find. This was not so easy before the internet, but I managed to keep a lot of little girls wide awake at every party, an accomplishment I was very proud of!

Of course eventually, I discovered the story of Bloody Mary and Candyman, saying their names over and over to no avail. Hook Hand never visited my car when it was parked on a dark lonely road up in Griffith Park. I never found demonic spirits on my Ouija board or had any alien visitations. I do have a few paranormal experiences I could write about, but the ghosts were all so darn friendly! I did have a close call being in very close proximity to the Night Stalker, Richard Ramirez one night, but that’s a whole other story. Rather than continuing my dangerous behavior, luckily there was something else to feed my love of the macabre: horror films.

Synopsis: A group of teenagers unknowingly summon a paranormal presence during a weekend trip to Joshua Tree. The creature they awaken mimics their appearances to hide among them and seeks to separate them into groups of five to complete its deadly ritual.

In the film Head Count, Evan (Isaac Jay) is on a break from college and goes to visit his spiritually odd older brother Peyton (Cooper Rowe) who lives in a trailer in Joshua Tree. While out on a hike, they run into a group of stoned, party animal twenty-somethings, and Evan ditches his brother to have fun with college students his own age. Plus, one of the girls, Zoe, (Ashleigh Morghan) the odd single, is very cute and seems to like him!

Not really welcomed by the rest of the gang, Evan tries his best to fit in. When the rest of them start telling the required scary stories by the fire that evening, Evan with help from a Creepypasta site called anonymousnightmares.com, finds a poem that claims to be able to summon a snake monster called the Hisji. He could have picked any of the thousands of made-up stories on the site, but this one was the real thing, he says its name 5 times as instructed, and all hell breaks loose on the group of super wasted dorky characters.

While not a totally original premise, I liked Head Count for a few reasons.

The Characters. Even if they are a bit stereotypical, the characters were all people that were interesting enough to be in the film, but not likable enough for us to mourn them if the monster takes their life. Some of the acting was a bit weak, but our lead characters were really good, and they were the only ones we needed to care about anyway. Evan and Zoe had great chemistry, and I liked Evan’s weird brother Peyton too.

The Cinematography: The cinematography was intense. I loved the colors and the camera work! The locations out in the desert were fantastic and it was a perfect remote place for a monster to take control of a group. The sound design was great too. There were some great moments, made perfect by the music, whispers and clicky noises behind it.

The Deaths. I really liked that the deaths were not just caused by a monster running around like a zombie ripping the shreds out of people. This monster was a doppelgänger and managed to get into the center of their group, by literally becoming them. I loved that twist! Also, the monster doesn’t have to do the dirty work- he makes the kids do the bad things to themselves. This is one naughty critter, who never has to get his hands dirty or bloody! Not knowing who the bad guy was really messed with my head, and I had to go back a few times to see if someone was in the room twice, which sometimes they were. It was confusing but cool. You never really see the monsters true form, which is always better. Less is definitely more! What we as the audience imagine is usually worse than most screen monsters. 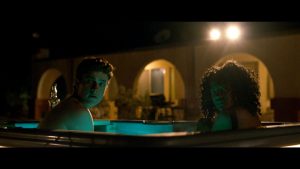 The Number 5. It took five sayings of the monster’s name to summon him and everything was in groups of five from then on. I found myself looking for groupings of five in things around the house because it always was an omen that bad shit was coming down.

Overall Head Count is a fun horror flick about making bad choices, the dangers of the internet, too much partying and how easy it is for a shape-shifting monster to tear a friend group apart from the inside out. Left open-ended, I see the potential for a sequel – but I’m not sure this was a great enough film to get that. But that being said, I still enjoyed the creative deaths, the mind games from the monster, and the chaos it caused.

Some words of wisdom? Don’t read chants or poems you find on the internet that are supposed to awaken creepy entities. Just don’t, OK? And if you do and feel like there is a passenger in your own body, well sorry, there probably is!