Nature collects on a debt 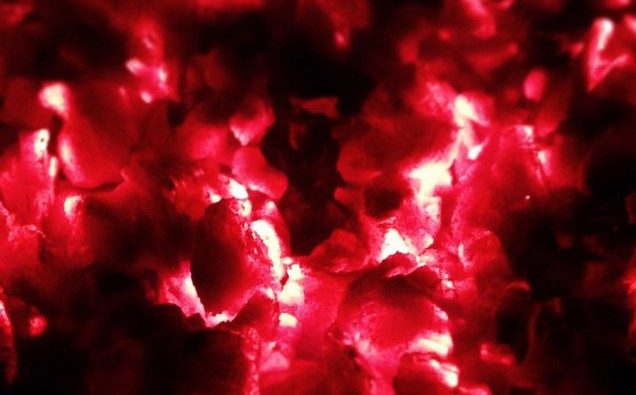 It was a slow burning oak fire.  Rich, viscous smoke drifted away from the campsite on a lazy wind.

In the hours since sunset, the flames had seen Walter and Kenny through a dozen beers and two tightly rolled joints.  Now, the last log was nearing its end, bound in a few minutes to collapse into the mass of red and orange embers. 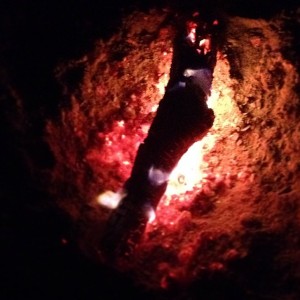 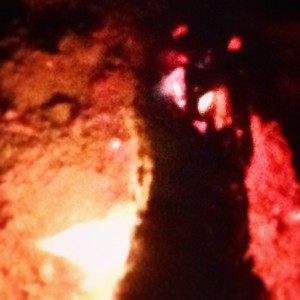 Sandwiched between that dim glow and the tiny points of light above – those echoes of fires that blazed at them across the galaxy, from before the trees and the air were bent to the service of mankind – there was now just darkness.  Kenny’s eyes could no longer find the old oak tree, not thirty yards from their camp, at whose lowest limbs Walter had so haphazardly chopped to provide their firewood.

In fact, he had to strain to see just a few feet from the fire pit, where their tools rested atop grass and soft earth.  The ax that had mauled the oak, the shovel that would soon pile euthanizing sand onto the tired remnants of their inferno.

But, as the last of the timber crumbled into the mass of cinders, Kenny’s mind summoned visions of the jutting shards of wood that Walter had left, angry splinters on either side of the tree, where once two branches had strained for the sunlight. 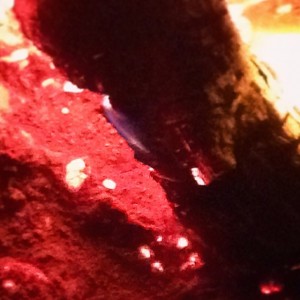 “Snap out of it,” came Walter’s soft but insistent voice.

But tonight, an even quieter voice spoke to Kenny, and it was more insistent than Walter’s, older and wiser, and angry.

Kenny couldn’t take his eyes from the embers.  In the interplay of orange, magenta and coal black, he saw the life of that tree, from sapling to elder statesman of the wood. 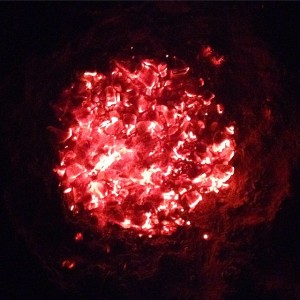 The swirls of light and dark became the knots and the gnarls of that tree, and in those knots and gnarls were faces twisted with sorrow, agony and rage.  The life of that tree flared and softened in their pit, telling Kenny its story in words he could not comprehend.

A change in the wind brought the languorous smoke around to Kenny.  It flooded his orifices.  He coughed and wept, and a little mucus ran from his nose.

And when the smoke had passed, the language of the forest was no longer foreign to Kenny.  Now, when the embers spoke, he understood.  And he did not argue; he acquiesced. 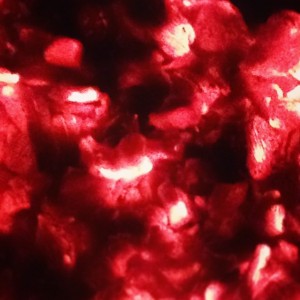 Walter’s face was plunged into the embers.  By the time he opened his mouth to cry out, he was already submerged.  The white, searing agony passed through the gate of lips and mouth, sprinted across tongue, and leapt for throat.

And Kenny’s eyes moved from embers to ax.

When the campsite was found the next morning, pieces of Walter filled the pit, some singed at the edges by the last life of the fire.

Not thirty yards away stood the old oak.  Where its two lowest branches had once reached out, now there were jagged fragments; from their needle-sharp ends extended two human arms.  What Walter had taken had now been given back.

Between the tree and the pit, there stood Kenny, ax and shovel lying not far off.  He was buried to his waist in the dirt, his gaze trained heavenward, his arms stretching out to grab at the sunlight for which he now starved.

The Blood Shed has reviews, articles, stories, poetry, and more, all geared towards the horror fanatic, so keep coming back, and be sure to visit our Facebook page!