EVENT RECAP: LOOKING THROUGH THE EYES OF MASTERY: THE UNMASKING OF HORRORHOUND WEEKEND INDY

THE UNMASKING OF HORRORHOUND WEEKEND INDY 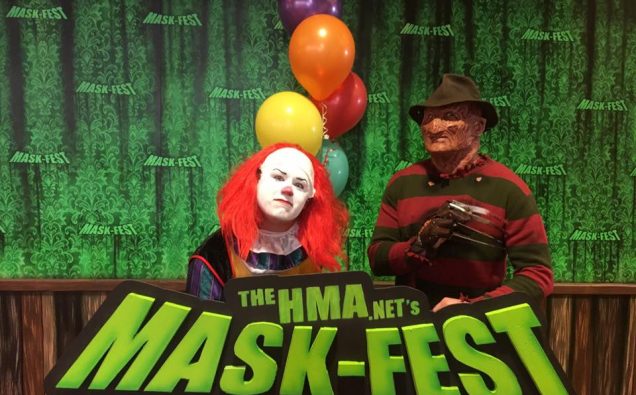 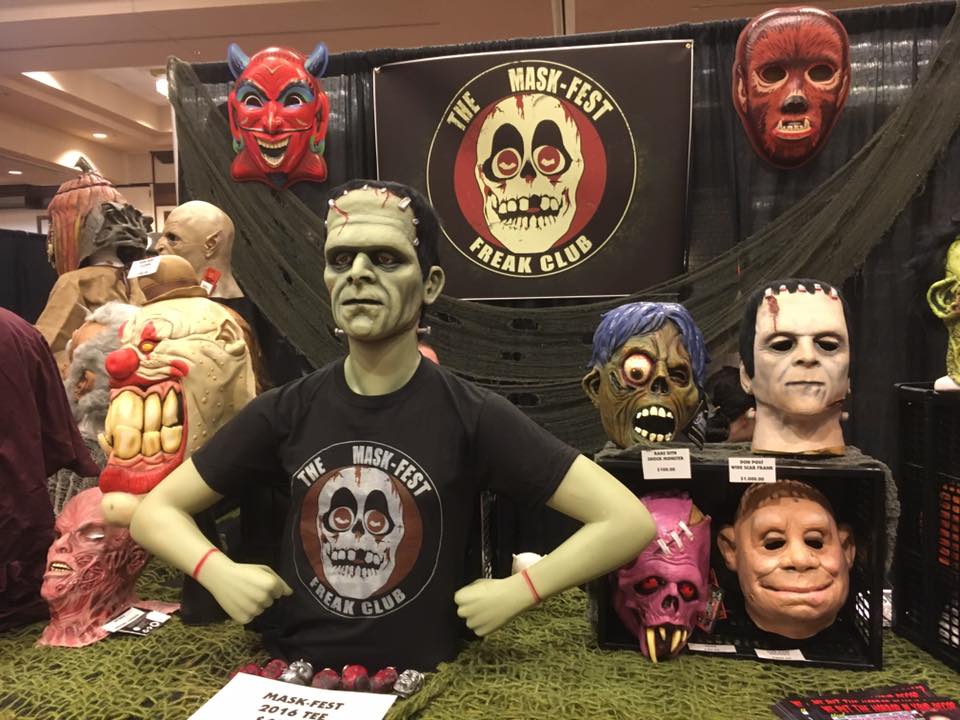 Horror conventions have become an evolving big business. Each year more shows arise from the grave to stake claim to the next big horror craze around the world. The shelf life however of a majority of these conventions is not good. Many lose their focus from the goal. Many are undermanned. Many think or dream way too big for the frame they have constructed. Even the location may play a huge role it the success or failure of sure thing. This is one side of the reality within this complex puzzle of balanced and busy conventions. The other side of the reality is the magic that comes about when a convention works for so many different reasons. The goal for any horror convention is building a foundation, learning, quality and sustainability. HORRORHOUND WEEKEND continues to be one of those shows that gets it right.

Offering a different style and feel of show, HORRORHOUND Indy creates an experience for fans of true horror in all of it different forms. Unlike the much larger Cincinnati show that sits inside a convention center and brings together well-rounded elements of horror, television, pop culture and more, HORRORHOUND Indy for my first time, left a lasting impression that makes me happy I made the trip! The most recent incarnation of this meeting of horror madness returned back to its birth place in Indianapolis, Indiana at the Indianapolis Marriott East back on Sept 9-11. Creating a unique and well-rounded experience for every member of the horror family, HORRORHOUND featured the different dark corners of horror including a well-attended and supported film festival, never ending line of vendors, multiple ballrooms of guests, diverse panels, ample after hours’ entertainment and of the legendary MASKFEST! 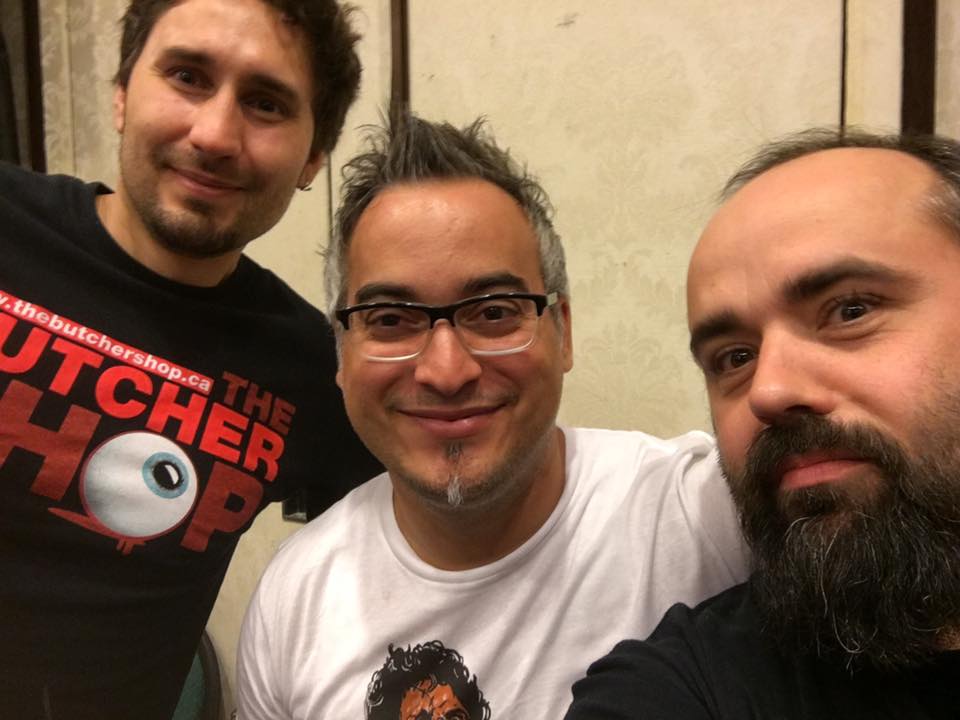 Being able to travel from the bunker in Blairstown, New Jersey to a variety of shows, film fests, expos and conventions, I always want to make my trip worth your time. Many shows do that as I live to experience the hard work each one showcases. HORRORHOUND has always been worth the time and trip with not only a balanced and changing show but feeling like you belong. The weekend of HORRORHOUND began as the guest panels kicked off with a reunion in the making for decades as the horror, gore loving best friends from the film 1987 cult comedy SUMMER SCHOOL saw “Chainsaw” (Dean Cameron) and “Dave” (Gary Riley) brought together to offer insight, stories, humor and a well-rounded focus to the adoring fans. This was the first of eleven panels with cast and creator reunions surrounding such horror classics as NIGHT OF THE CREEPS, CHILD’S PLAY, FRIGHT NIGHT, WISHMASTER, HALLOWEEN 6, CANDYMAN and SCREAM! Weaved into the fan favorite panels was legendary blackploitation actress and incredible human Pam Grier as well as the massive indie filmmakers panel hosted by Dr. Michelle Conty and the legendary stories during the VESTRON VIDEO panel. Especially with the indie filmmakers panel, the connection and platform of this artistic expression was met with a balance of discussion, facing of fears and laughs about the projects both short and feature we have come to admire as well as the filmmakers we have come to respect. With a variety of hosts taking different perspectives and showing insight as well as energy, fans enjoyed a well-run and technical presentation. 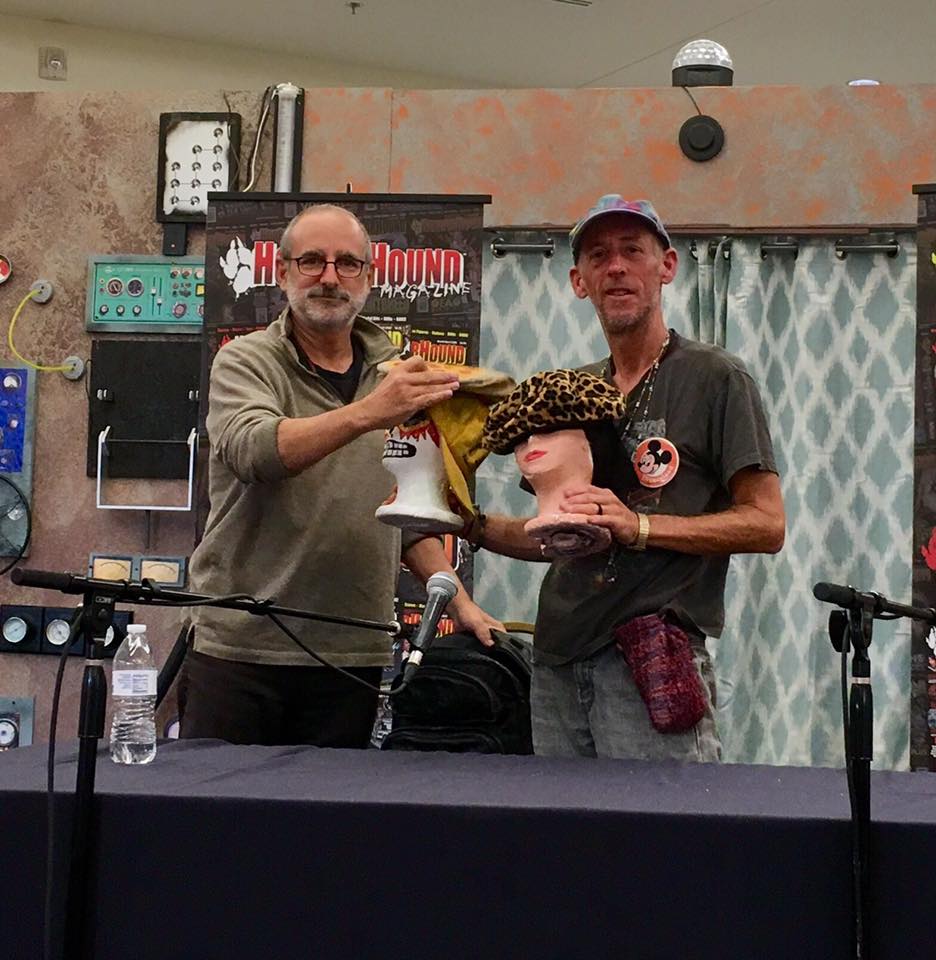 The Indianapolis Marriott East as a location offered a spacious platform for fans of the show as well as professional manner in handling problems in partnership with HORRORHOUND. While the panel room was a good distance from the main floor of the convention, it did not affect the flow to the show and the continuous busy feel all three days as they were steady to very busy which not all shows can say. The film festival offered fans great diversity in underground films, mainstream films, short films and special presentations. Horror genre films like the strip club infection thriller PEELERS highlighted a lineup with film making talent that traveled across the country. Filmmakers like Boston’s Skip Shea and New Jersey’s Ryan Scott Weber presented films that showcased legendary horror actress Lynn Lowery who won best SUPPORTING ROLE Shea’s controversial and powerful arthouse church based sexual abuse film TRINITY. Weber pulled in a great crowd on Sunday as his latest feature PRETTY FINE THINGS had several cast members travel to film festival in support of the talented director and lead actor Joe Parascand taking BEST ACTOR. The brilliance of the underground came to the surface as filmmaker Brian K. Williams and actress Ellie Church had their fingers into several of the film projects both in front and behind the lens. Williams and Church presented the truly engaging, primal and at times disturbing tale of PLANKFACE. James Bickert made his presence known with the Saturday double feature of exploitation cinema in DEAR GOD NO and FRANKENSTEIN CREATED BIKERS. Other films that were a part of the weekend lineup included the survival film PARASITES with Corpsy Rhine in attendance to promote his projects and his magazine. Kevin Smith’s YOGA HOSERS, the supernatural STD in LACE CRATER, along with the HORRORHOUND FILMS VHS release of “PLAN Z”. This joined several other films and a special fan screening of the vampire hit by Tom Holland, FRIGHT NIGHT. The short films program which set the stage for each feature, offered great diversity including the animation of CHASING JENNY. The critically acclaimed Jill Sixx sophomore short THE STYLIST as well as shorts like MASTERMIND, I.V. LEAGUE, DEATH METAL and BEST SHORT FILM WINNER “HAPPY BIRTHDAY, BRENDA” among others! One of the true highlights for me, was the sneak peek at a television show that we may very well be talking about for years to come. FOX’S “THE EXORCIST” pilot episode was screened to a packed house for only the second time before its live air date on Friday, September 23rd. Writer Jeremy Slater was in attendance answering questions, signing posters and talking the importance of creating something and expanding the mythos behind it! (Listen to his conversation with me on THE HORROR HAPPENS RADIO SHOW on Tues September 20th on HGRNJ.org)

Expression was a key factor to the weekend as creative and creepy minds from all walks of life infected the halls, corridors and ballrooms in cosplay and costumed glory! A huge theme and dark heart of any show. The fans who lived local as well as traveled brought larger than life ghouls, demons, pop culture characters, famed horror figures and of course original creations like the ever damning presence of FATHER EVIL… With all the costumed madness present and adding the dark energy to the show, the after hours entertainment showcased networking, partying and a live performance of the ROCKY HORROR PICTURE SHOW Friday night. On Saturday night, there was huge “Pajama Dance Jam” Concert featuring ARGYLE GOOLSBY, THE JASONS and the CHUMP CHANGE VARIETY SHOW with music by DJ Joel. 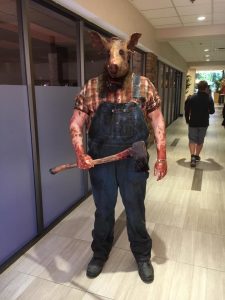 With so much going on for everyone, the weekend saw many rise from the dead after a most pleasurable and powerful night of partying to shop the vendors each day and support horror in all of its different dark corners. Vendors ranged from your traditional horror films suppliers/filmmakers to poster art, apparel, music (including the release of HORRORHOUND MUSIC’s latest horror music record), books (Kitley’s Krypt), magazines, collectibles, food, drink and toys… oh my! Lots of artistic expression laced the floor including the “Blacksmith of Horror” NIGHTMARISH CONJURINGS, a variety of paintings, models and more! Celebrated artists like Joel Robinson, Christopher Ott, Nathan Thomas Milliner, Chris Kuchta among others met the fans and celebrated the love of horror creation! 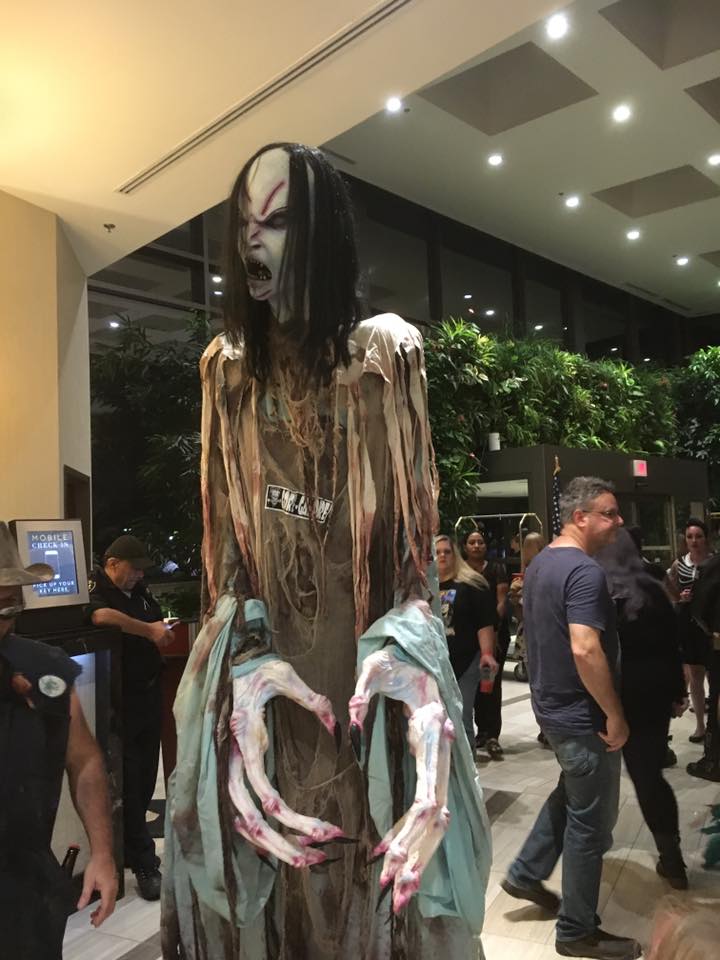 There was something for everyone as it paired nicely with the aspect of the famed celebration of horror nightmares come true in MASKFEST that has become a staple of the weekend! Practical, visual and makeup FX artists like Robert Kurtzman (From Dusk Till Dawn, Late Phases, Wishmaster), the Toronto based THE BUTCHER SHOP (Bed of the Dead, Heir and Death Race) and John Carl Buechler (Troll, Friday the 13th and Nightmare on Elm Street franchises) met fans with stories, wisdom and admiration. They joined mask makers, makeup artists and FX makers from across the country in a visual powerhouse not offered to level by any conventions at this level expect MONSTERPOLOZA on the left coast off the top of my head.

However, the primary draw for many of the fans, came from the variety and bounty of guests that filled multiple ballrooms. With so many horror film and franchise
reunions, fans were treated to cast reunions of HALLOWEEN 6, FRIGHT NIGHT, CHILD’S PLAY, NIGHT OF THE CREEPS, SCREAM AND SUMMER SCHOOL. Fans came face to face with legendary genre actors like Dee Wallace (Cujo), Brad Dourif (Child’s Play), Jamie Kennedy and David Arquette of SCREAM, Pam Grier (Foxy Brown), Xander Berkeley (Candyman), Chris Sarandon, Catherine Hicks, Alex Vincent all of CHILD’S PLAY, Tony Todd (Candyman), Andrew Divoff (Wishmaster), Piper Laurie (Carrie), Tom Atkins (Night of the Screeps), Ted Raimi (Midnight Meat Train) and the always personable Michael Rooker (Henry: Portrait of a Serial Killer) among others. The rising stars like Danielle Bisutti (Child’s Play), Nivek Orge (Repo: A Genetic Opera), Fiona Dourif (Enclosure), Jeffery Daniel Phillips (The Lords of Salem) among others. The cult horror directors like CANDYMAN’S Bernard Rose and THE MONSTER SQUAD’S Fred Dekker met fans wanting to know more about the work they have come to crave over the years! From my observations, the lines seem to never end and fans found that moment of joy and terror meeting figures of their movie loving lives. A general sentiment and theme of the weekend that did not disappoint. Wanted to give props to the crew and management of HORRORHOUND who through my observations and interactions was gracious, knowlegebale and covered all the bases completely. For horror fans who have seen it all, experienced the same and look to be part of something larger on every level, join them if you dare at HORRORHOUND WEEKEND. The next weekend will be in March in Cincinnati, Ohio. For more information, head to http://horrorhoundweekend.com 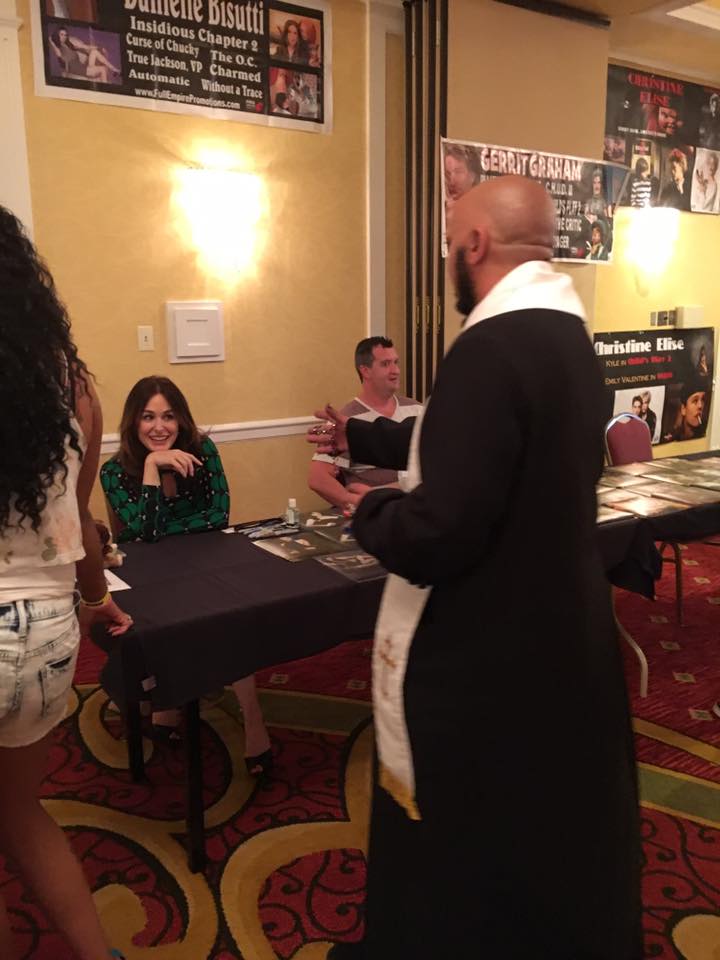 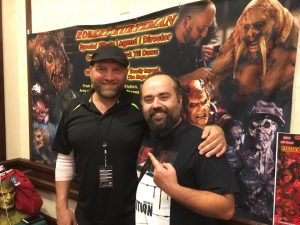 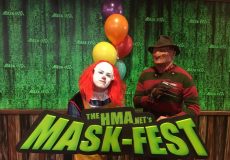