There are no small parts 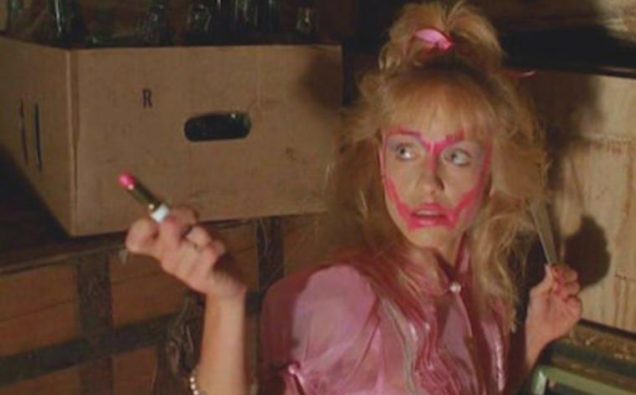 This past weekend, I was invited to be a special guest at the Buffalo Comic Con. Great event with some great folks attending! Of note, one of the most legendary scream queens, Linnea Quigley herself! I talked with Linnea a bit and she told me about a documentary she is putting together called “Extras”. Check it out!

Johnny Macabre: Ms. Quigley, thank you very much for taking the time to do this interview with me! So, you are putting together a documentary called “Extras”. What can you tell me about that?

Linnea Quigley: Well, “Extras” is a dream project of mine I’ve wanted to do for at least ten years now. Being in the film business, I started out as an extra. And I think it’s just interesting because always when I am watching films, I watch the extras. The way they acted and how they would try to cozy up to the main actors and how they would talk about themselves. I would ask them what projects are you doing and they’d say “Yeah, I’m like the third one from the fountain. I get screentime and…” It’s just really interesting! And there’s the people that are really theatrically trained and they are doing it just as a job to get somewhere and do it to pay the bills.

JM: It’s very interesting. How far into your career were you before you got your first big role?

LQ: It wasn’t too long because I was at the age where, you know, it’s easier to get passed it. You know, teenage years. 17 or 18 year olds, right out of high school. I would say for me it was maybe a year or so? It started out with just a few words and led to more words, more sentences, until I finally had a real part!

JM: Alright! So, who else is working on this documentary with you?

LQ: Jason Paul Collum, the one who did “Screaming in High Heels: The Rise and Fall of the Scream Queen Era”.

JM: Ok, that’s very cool! Now, what would you say is your end goal for this documentary?

LQ: My end goal would be for it to be like Penelope’s punk rock documentary. To be just not perfect, to be kind of just talking to someone, talking to your friend or somebody on a subject that they are very interested in.

JM: Fantastic! Now, where are you in the production right now?

LQ: Well, right now we have a Kickstarter that was just set up yesterday (9/17) which is at “Linnea Quigley’s EXTRAS”. We’ve already got some money coming in already. I’ve been to England recording stuff and every convention I do or filming on the set. I also talk to directors about working with extras. It’s everything extras!

JM: Perfect! So, would you say there is a rough timeframe for when you hope to see this released?

LQ: I would hope by next October.

LQ: Yes, because when you are doing things low budget, things tend to run a little slower than when you have a big budget. So, I’d say it’d be great to have it out by October of next year.

JM: Sounds great! It’ll definitely be something to look forward to around Halloween.

JM: Alright, great! Is there anything else you are working on right now?

LQ: Well, one thing I think all the Halloween readers would like is that I did a really small cameo, but I am really impressed with this project, called The Barn. It’ll be out in October, I think October 11th, on DVD and Amazon from Nevermore films. And they also have VHS too but get the DVD. It won’t be eaten! It’s a really good Halloween movie! Very much like Night of the Demons.

JM: Very good! Yeah, I have not seen The Barn yet, but I’ve heard amazing things about it. I’m really looking forward to seeing it.

JM: Alright perfect! Well, thank you very much again for taking the time to do this interview. Before I let you go, is there anything else you’d like to tell the readers?

LQ: Be kind to animals, don’t eat them, don’t abuse them or I’ll come looking for you with my chainsaw!

You can check out the Kickstarter campaign for Extras below!