Fred Durst turns over Hollywood to look at it's dark underbelly 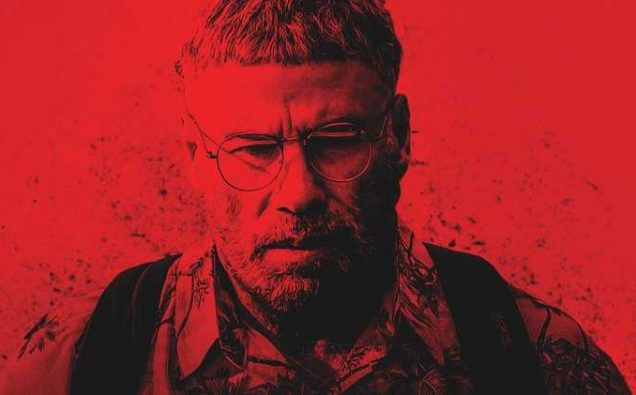 “You are a fan. Without you I’m nothing – Hunter Dunbar.” This is the quote on the screen at the beginning of the film, from one of the lead characters. Further into the film, you will learn the irony of this statement.

The Fanatic is a crazy, brutal ride. The dark side of Hollywood rears its ugly head in this creepy stalker film. Limp Bizkit’s Fred Durst weaves a disheartening tinsel town tale, based on an unsettling experience in his own life. 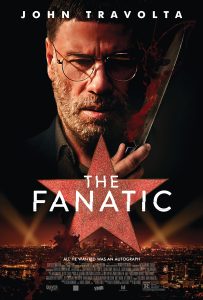 The Fanatic is narrated by the character of Leah, (Ana Golja) a paparazzi who tries to be a friend to our socially disabled lead but ends up hurting the situation in the end. “They say you shouldn’t ever meet your heroes.” she shares. She is totally right about this. Some movie stars don’t live up to your visions of them. Though not always, it is often better to leave the fantasy on the big screen and admire our idols from afar. When troubled fan Moose, (John Travolta) meets his movie idol Hunter Dunbar, (Devon Sawa) the encounter goes badly. And once that ball gets rolling, things go terribly, terribly wrong.

Official Synopsis: Moose is a rabid movie fan who is obsessed with his favorite celebrity action hero, Hunter Dunbar. When he is cheated out of his opportunity to finally meet Hunter, Moose gets a little help from his friend Leah, a well-connected paparazzi photographer, who knows how to find celebrity homes. Moose turns to stalking to get the celebrity interaction he feels he deserves, and while harmless at first, Moose’s actions begin to take a dark turn as his obsession grows stronger. As the visits continue to escalate, Hunter Dunbar finds himself in increasing danger.

Ok, I gotta stop right there. This synopsis is misleading. 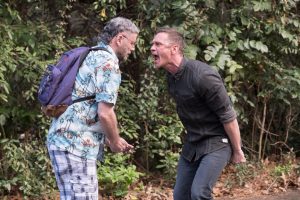 Hunter is in danger? Only if you look at it as if he is some sort of victim. Yes, Moose is not your normal average guy and stalking a celebrity is illegal. But Moose has probably been bullied his entire life. He is obviously very high functioning in order to live on his own and have an apartment, but he is defined by his disability because his strange behavior will never let him fit in. It is never mentioned exactly what his diagnosis is, but according to John Travolta in an interview about the film, Moose is “on the spectrum” which means he has some form of Autism or possibly Asperger’s Syndrome.

The other thing worth mentioning is that Hunter, the actor that he is obsessed with, is a total asshole and doesn’t seem to realize you can’t just bully and punch people, even if they are in your personal space. It’s 2019 dude, and you are under a microscope. Hunter and other bullies like him are the truly dangerous ones. Moose is a loose cannon, but the bullies are the ones who get him ready to fire. Everyone has a breaking point. Hunter and others like him are the catalysts for Moose. 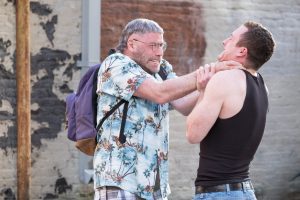 The story in The Fanatic is a familiar one. Elements of many obsessed fan films are there; Misery, Play Misty for Me and Big Fan come to mind. In the evening news, there are stories of many real stars stalked, have fans that sneak into their homes, and even more tragically, murder them. So, this is a real problem and is also a well-used movie trope.

I wanted to like this film. Because this kind of obsession happens so much in real life, I was really interested in seeing how a celebrity like Fred Durst would portray this story, since he himself has been the victim of stalking, but… The Fanatic has me on the fence.

I loved some elements of it and other parts not so much. One reason it was hard for me, was because other than his early work on TV, Saturday Night Fever and Grease, I’m not a big John Travolta fan. (OK add Pulp Fiction to the like list too, but that was kinda Quentin Tarantino’s doing!) But since he has done more than 70 films, the numbers aren’t too good. Add in that Battlefield Earth was so incredibly terrible, Travolta needed a winning film.

I’m afraid this wasn’t it.

The biggest drawback from the film was Travolta. Instead of his character being one I was drawn into because of the acting, that was the worst part. I could literally see him acting. The gestures, lack of eye contact and ticks, may be real behaviors, but I didn’t believe them from him. All I saw was John Travolta in a weird hairpiece – play-acting and not truly owning the character. 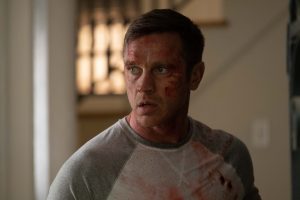 But what did I like? The film itself was pretty good overall. The rest of the cast was right on, even if some were a bit over the top. I had heard that it was super gory and thus not rated, but compared to what? I thought the gore was right for the story and the twist at the end was unexpected and very satisfying. Both characters go over the line of good behavior so far, that this film morphs from a thriller, straight into a horror film and I loved that! Some of the scenes when Moose is inside Hunter’s house, I caught myself yelling out loud, “Oh, no Moose, don’t do it, no don’t do it!” But he would. Sigh. Once the line was crossed no one could ever really go back.

The Fanatic is a dark film that goes straight from creepy to crazy at lightning speed. I think for any fan of Hollywood, and of course John Travolta fans, this is a terrific film and it is fully a horror film, so of course, that works for me. I am not sure it will be a commercial success, but for the record I enjoyed it and I think it’s worth a watch.