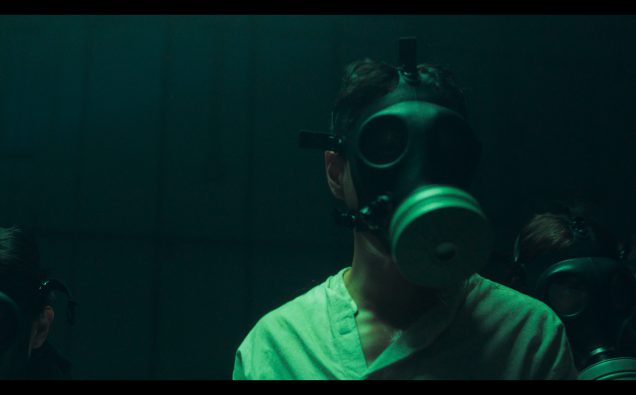 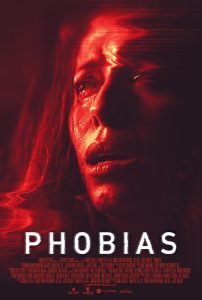 Phobias is an unnerving horror anthology that peeks inside five phobias and ponders the power of fear. While a little hard to follow at times, I enjoyed the broad range of emotions, stellar acting, and surreal cinematography.

The definition of fear is an unpleasant and often strong emotion caused by the anticipation or awareness of danger. Fear is one of the seven universal emotions experienced by everyone around the world. Fear arises with the threat of harm, either physical, emotional, or psychological, real, or imagined. While traditionally considered a “negative” emotion, fear serves an important role in keeping us safe, because it prepares us to cope with potential danger. There are many layers to fear, starting with simple trepidation at the bottom, to the extreme at the top being absolute terror.

So, what if we could see, and even experience other people’s fears and phobias? The film Phobias is a filmmaking collaboration that explores extreme phobias in a very unusual way. Combining five different stories, by five different writers and directors, it looks much more cohesive than the usual horror anthology. I was happily surprised to see how well the stories blended. You do know when it moves to the next storyline because the new phobia’s name comes up on the screen, but otherwise, the segments flow together seamlessly.

SYNOPSIS: Five dangerous patients, suffering from extreme phobias at a government testing facility, are put to the ultimate test under the supervision of a crazed doctor and his quest to weaponize fear. 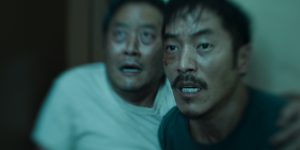 The main premise of the film is that there is an evil doctor who works for the government who believes that fear is a weapon you can control and that by tapping into it he can use it for his own dark purposes. Always the government, right? This nefarious scientist is searching for and capturing people with extreme phobias and keeping them in a secret government testing facility.

We first meet Johnny (Leonardo Nam) a loner who while taking care of his sick father, spends a lot of time on the computer. Until he is contacted by a sinister entity on the internet, who apparently can see him and knows all about him, he never thought of the computer as dangerous. After his new “friend” helps him do away with a few bad people in his life, it asks him for a favor back. 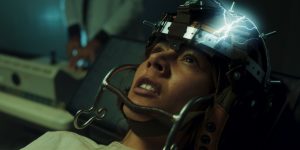 Somehow, Johnny ends up as a guinea pig in a government facility run by Dr. Wright, (Ross Partridge) who has a machine that can turn your fears into a gas that he can collect and keep. He finds himself locked in a dorm room at Outpost 37 (the wraparound story that ties them all together) with people who have as much to fear as he does. This is where we meet the other unlucky phobia-driven characters that Dr. Wright experiments on.

Representing Vehophobia, which is the fear of driving, is Sami, (Hanna Mae Lee) a punk rocker who does something impulsive during a robbery gone bad and now has terrible nightmares of dying in her car. Emma, (Laura Miller Rogan) a not-so-perfect school teacher with Ephebiphobia, messed around with the wrong family and now deals with the guilt of the teens she has hurt. 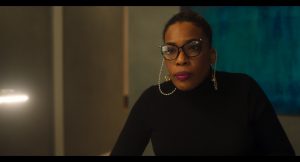 Alma, (Martine Garcia) is an ex-swat team member who now has Hoplophobia. She is terrified of weapons after a terrible accident during a raid. And Renee, (Macy Gray – yes, the amazing 90s singing star) a high-powered architect, has such an overwhelming and obsessive need for perfection, Telophoia, that it causes her to do unspeakable things.

This crazy group of misfits eventually wreak havoc and attempt revenge for what was done to them. The fearful five have to work together to keep their terror at bay if they want to escape. I’m sure with what they were being put through their brains couldn’t last forever, and they would be lost inside themselves, reliving their darkest memories over and over forever. Not a great way to go. 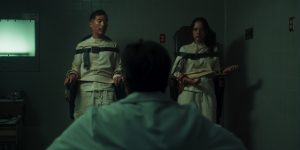 The twist at the end was terrific, but there were a few plot holes that left me confused.

The main problem is that I am not sure how any of them came to be in the facility in the first place. But the cinematography was incredible and the SFX totally kicks-ass!!! (Simon White and team, you rock!) I also enjoyed watching the creepy Dr. Wright get his just rewards. Revenge can be sweet indeed.

Final Thoughts: Special shout-out for Leonardo Lam and Macy Gray. These two were the main reason the film works so well for me. Stellar performances from both. Honestly, the acting from everyone was top notch and that is saying a lot in any horror film!

I would not call most of the fears as portrayed, phobias though. In each segment, it is more like the characters have a severe case of PTSD. But in any case, Phobias is an extremely interesting study of fear itself. Fear is different for every person and this film shows us how our minds can go to some very dark places.

Hopefully, you don’t suffer from Cinephobia! (The fear of watching movies) – So you can check out Phobias! Happy thoughts, don’t be afraid!

Vertical Entertainment will release the horror/thriller film PHOBIAS – On Demand, and Digital on March 19, 2021.

All photos courtesy of Vertical Entertainment

ROBOPHOBIA
Written & Directed by Joe Sill
Robophobia (from Czech word robota, meaning “drudgery”) is the fear of robots, drones, robot-like mechanics, or artificial intelligence. It frequently results in a panic attack and can be triggered by viewing a robot, being near a robot, or even just talking about robots.

EPHEBIPHOBIA
Written & Directed by Chris von Hoffmann
Ephebiphobia is the fear of youth or teenagers.

HOPLOPHOBIA
Written & Directed by Camilla Belle
Hoplophobia is the morbid fear of guns and firearms.

OUTPOST 37 + ATELOPHOBIA
Written & Directed by Jess Varley
Atelophobia is the fear of not doing something right or the fear of not being good enough. In other words, it is a fear of imperfection.