Overview:
The military has been in the neighborhood for nine days.  Citizens are kept behind a large fence and a curfew is strictly enforced.  Chris is videotaping the surrounding areas.  It’s seems everyone is dead except those inside the fence.  Chris soon spots a flashing light inside a house far away.  Is someone still alive?  Are they trying to make contact?

Travis and Madison are trying to keep things normal at the house.  Travis goes running every day while Madison does chores.  Alicia thinks it’s a waste of time.  The world is over and nothing is ever going to be normal again.  Travis seems to be ignoring Chris, especially when Chris tries to show him proof that someone is out there beyond the fence.  Nick tries to convince Madison that he’s off drugs for good.  This proves to be a lie as he later takes a Morphine drip from a sick man and uses it to get high.  She’s also getting frustrated seeing as how Travis seems bent on focusing more on being a ‘man of the people’ than worrying about his own family.

The next day. Travis is enlisted by Lt. Moyers (Jamie McShane) the officer in charge.  A neighbor, Doug Thompson, is acting strange.  Moyers wants Travis to calm down.  Moyers warns that if Doug can’t be calmed down, he’ll be taken down.  Travis agrees to help anyway he can.  Doug is really upset.  He knows he can’t tell his family everything will be okay.  Travis tells Doug the best way to comfort his family is to show them that he’s okay and they’ll feel better.

Madison and Travis share a tender moment.  It feels good to be alone with each other.  They get into a discussion about what Chris saw.  Travis thinks it’s nothing while Madison is worried about the intentions of the soldiers.  They’ve been there for nine days and have made little progress.  She’s skeptical that they can’t get a landline up and running.  Madison thinks the soldiers want everyone in the dark.  Travis assures her everything is fine.  The sentiment is broken when Doug’s wife, Maria, shows up and tells Travis that Doug’s missing. Travis later learns from Moyers that Doug was taken away.  He doesn’t give any information to where Doug was taken to.  Travis begins to suspect that Moyers can’t be trusted. 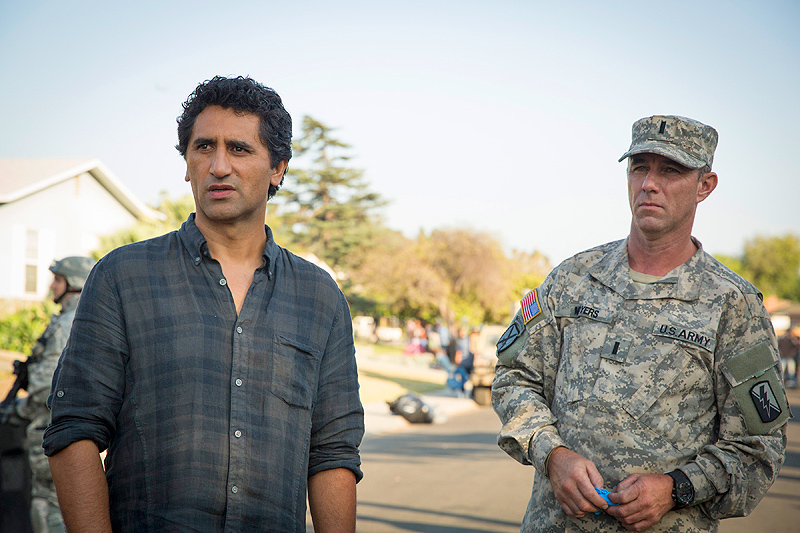 Liza goes back to visit Cynthia and Hector.  She instead meets Dr. Exner (Sandrine Holt).  Exner is with the government who’s been to sent to assist the people inside the fence.  Exner praises Liza on her commitment but doesn’t answer any questions.  Exner knows that Liza isn’t a nurse.  Liza did save some lives so she wants Liza’s help.  Liza is brought in after learning Griselda is in bad shape.  Exner suggests moving her to a facility so they save her life.  Her foot is infected and needs to be amputated.  Daniel is set to go with them to look after his wife.  The soldiers also are about to take Nick.

Travis tries to intervene but is forced to back down by the soldiers.  The soldiers are prepared to shoot anyone who stands in their way.  Travis is able to get them to calm down.  Liza tries to convince the soldiers to let Nick stay.  Exner insists that Liza is  needed at the facility.  She assures Liza that Nick will be safe.  Liza reluctantly goes with them to the facility.

Madison is furious because she thinks Liza is responsible for Nick being taken.  Shocked, Travis goes to the roof to think.  He sees the house Chris was talking about.  There’s a brief light.  Travis stands up and hears gunfire.  There’s several rapid shots then one final shot.  It’s quiet.  What in the hell happened inside that house?

Alicia: (To Travis and Madison) Stop.  Oh my God, just stop it.  This domestic bickering like it’s normal, like you’re normal people in a normal kitchen.  It’s not normal.  Stop acting like it is.

Daniel: When I was young, these men were from the government. They came to our town and took some people away.  And my father was someone of certain importance in the community, so he went to speak to the captain and asked “When will they return?”  And the captain told my father, “Miguel, don’t worry.  They always come home.”  And they did.  I was standing in the river fishing.  Just a boy.  And I found them.  All of them.  All at once.  All around me.  In the water.  My father told me not to have hatred in my heart.  He said that men do these things not because of evil.  They do evil because of fear.  And at that moment I realized my father is a fool for believing there was a difference.

Impression:
This show is revealing itself layers by layers.  We’re now starting to see another side of people.  The soldiers seem to be friendly at first.  Now, we see them as a potential threat.  Moyers comes across like a bully.  He knows more than he’s letting on.  There’s further proof of this when Madison is able to sneak away.  She finds several dead bodies.  A couple are slain walkers.  The rest appear to be people who weren’t infected.  Did these soldiers come to help or take LA by force?