Overview:
A young man, Nick Clark (Frank Dilane), wakes up in an abandoned church.  He groggily makes his way as he’s looking for his friend, Gloria.  Nick finds a man dead with a terrible bite on his neck.  He soon finds Gloria eating the face of another man. After Nick calls to her, Gloria stumbles to him.  Nick is horrified at her condition. A knife is sticking out of her chest, and she has a strange look in her eyes.  Nick runs away, then jumps out of a window to escape.  He runs into the street in a blind panic and is struck by a car. 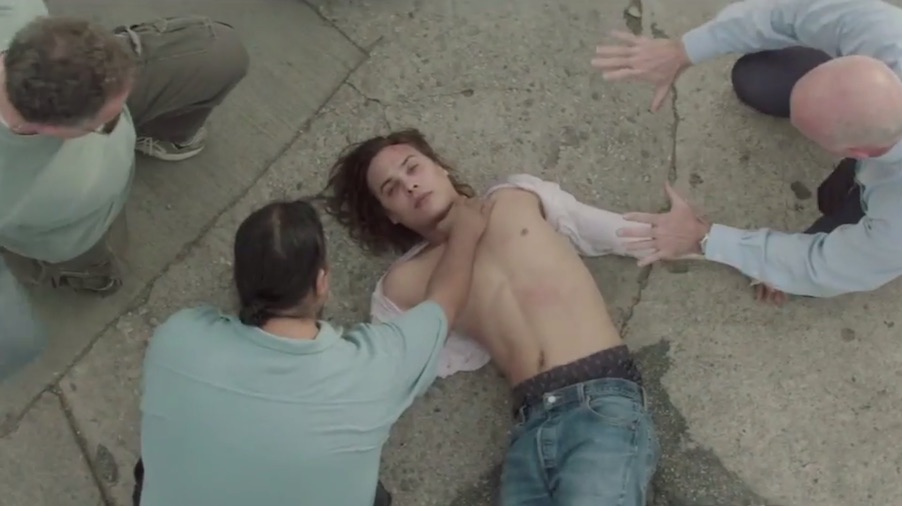 Nick’s step-father, Travis Manawa (Cliff Curtis), arrives with Nick’s sister, Alicia (Alycia Debnam-Carey), and Nick’s mother, Madison (Kim Dickens).  The police are there, trying to piece together what happened.  However, Nick refuses to answer any questions from the police or his family.  Madison suggests sending Nick to rehab.  Nick won’t go.  Alicia is clearly fed up with Nick’s addiction.  As Travis is dealing with this, he receives a call from his ex-wife, Liza (Elizabeth Rodriguez).  His other son, Chris (Lorenzo James Henrie), doesn’t want to come visit.  Travis is trying to build a new family and wants Chris to come and spend time with everyone.  Chris refuses and Travis reluctantly gives up.  He has to take care of Nick right now.  Travis decides to stay with Nick so Madison can take Alicia to school.  Madison works as a high school counselor.  At the school, a student Tobias, is caught with a knife.  When she questions him, Tobias mentions there’s a mysterious outbreak.  It’s happening in five states and spreading.  Madison assures him that everything is okay.

Travis is still with Nick.  Nick wakes up from a nightmare.  He tells Travis what happened at the church.  Nick assures him he didn’t hallucinate from the drugs.  Travis believes him and goes to the church.  He encounters a junkie who begs Travis not to kill him before he flees.  Back at the hospital, Nick’s roommate, an elderly man, dies.  The doctors and nurses rush the man out and take him downstairs. Nick takes his things and escapes.  He’s agitated and is back on the streets.  He needs answers about what happened at the church.  He tries to call his dealer, Calvin.

Later, Madison asks Travis to take her to the church.  She’s shocked at what she sees.  Travis points out that the bodies are gone.    Nick isn’t there.  They decide to head home and encounter a traffic jam on the highway.  The police are advising the people to stay in their vehicles.  Suddenly, gunshots ring out as Travis drives away.  The next morning there’s a video leaked online showing what happened.  A man bites a paramedic and attacks the police.  They shoot him several times but he won’t go down until he’s shot in the head.  No one knows what to make of this.

Nick gets a hold of Calvin.  Calvin doesn’t believe Nick’s story of Gloria.  Calvin offers to get Nick a fix.  They drive to a secluded spot under a bridge.  Calvin goes to the trunk and pulls out a gun.  After coaxing Nick out of the car, there’s a struggle.  Calvin is shot and killed.  Nick calls Travis for help.  Travis arrives with Madison.  They take Nick away as Madison tries to piece together what happened.  As they start to drive away, Travis sees Calvin.  He and Madison go to help him.  Calvin tries to attack them both as Nick runs him over twice.  The three of them watch in horror as Calvin, severely injured, is somehow still alive.  Whatever is happening, it’s only the beginning. 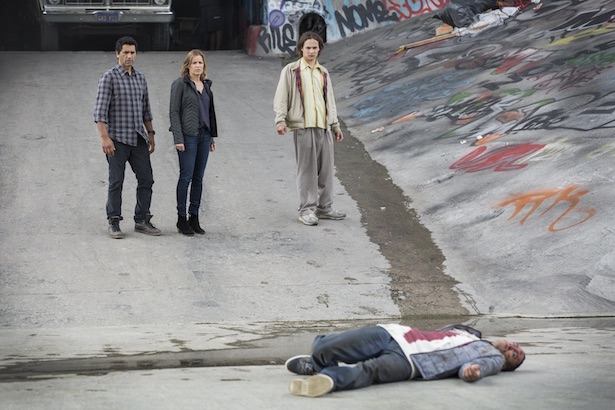 Impression:
This episode did a good job setting the tone for the season.  If you’ve watched The Walking Dead, you know what’s really going on.  It is interesting to see things from a fresh perspective.  No one knows what’s going on.  We can see the panic growing as people realize something dangerous is coming.  People can only stay calm for so long.

We’re not given much background information on the main characters.  We know that Travis and Madison are a couple.  They both work at the same high school.  Nick is a drug addict and although Alicia does care about him, she sees him as a burden.  She doesn’t believe he’ll ever be clean.  She wants to leave LA and start fresh.  This disaster might just kill that dream.  Instead of fixing Nick and his family, Travis will have to worry about keeping them alive.

Doctor: (after a patient flat lines) If we don’t get a rhythm him back in 60, I want him downstairs.  Too much we don’t know.

Madison: What the hell is happening?
Travis: I have no idea.

Note-worthy moment:
There was plenty of moments in this episode.  The one that stood out to me was the scene when the old man flat lined.  The reaction from the doctor and the nurses hinted that they know more about this than we do.  It turns out Tobias’s fears are rational.  I wonder how long this outbreak has been kept under wraps.  The doctor’s attitude means that he knows the dead are coming back.  They’ve had patients come back as walkers before.