So Close, Yet So Far

Overview:
Travis, Nick and Madison are driving as fast as they can.  Travis has a plan to get his family as far out of the city as possible.  After what happened to Calvin, he knows they have to stay away from other people. Travis tries to call Chris as  Madison tries to call Alicia. Travis and Madison have no luck reaching their kids.  Alicia finally calls back.  She went visit Matt, only to find out he’s really sick.  Matt’s parents are out of town, she keeps calling 911 but can’t get through.  Madison assures her they’re on their way to help.

They arrive at Matt’s house.  Alicia refuses to leave Matt’s side.  Travis asks Alicia to get Matt some water so he can take a look.  Matt has a nasty bite.  Madison wonders if that’s how people turn.  Travis knows Calvin didn’t get bit, he was shot before he turned.  There’s too many questions to answer.  Matt convinces Alicia to leave.  He knows he’s in bad shape and he doesn’t want Alicia to see him die.  Travis decides they need to leave the city before things get worse. 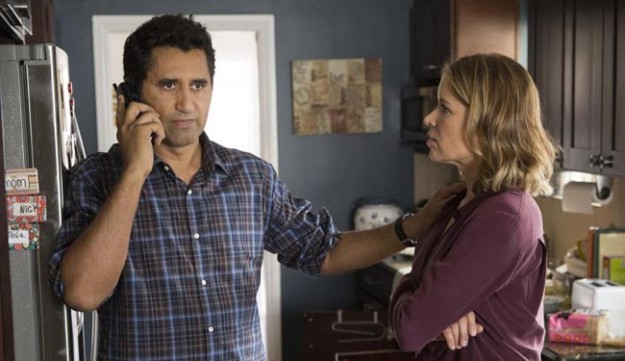 Travis tries to get a hold of his Chris and his ex-wife, Liza.  Liza answers, annoyed that Travis is breaking their custody arrangement.  Travis tries to assure her it’s more serious than that.  Liza won’t listen and assures him that Chris will be home soon.  Travis decides to take action and drive to Liza’s house.  Once he gets there, after a brief argument with Liza, Travis learns where Chris is at.  He’s with a group of people protesting an officer involved shooting.

Nick is going through withdraws.  He needs medicine so he can travel with the family.  Madison decides to go to the school to see what she can find.  There, she runs into Tobias.  Tobias is there to get his knife back and to stock up on some food.  They both grab some supplies and head out.  They hear someone groaning.  It’s ‘one of them.’  Madison and Tobias make for the exit as fast as they can.  They soon see Artie, the principal.  He’s one of the infected.  He attacks Tobias and Madison has no choice but to kill Artie by bashing his head in with a fire extinguisher. 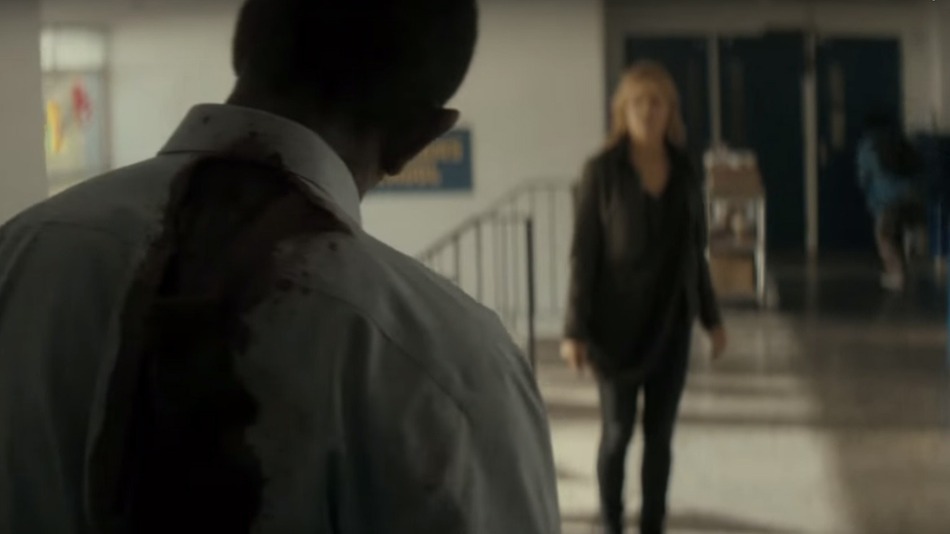 Travis and Liza arrive at the protest as they look for Chris.  Liza a dead body under a sheet just as  people in HAZMAT suits take him away.  She and Travis urge Chris to leave.  Shortly after, police in riot gear show up. Things so sideways quickly. They need to find shelter. Thankfully, Travis finds a barber, Daniel Salazar (Ruben Blades) who lets them in.  Daniel is weary of these newcomers seeing as how he’s trying to protect his wife, Griselda (Patricia Reyes Spindola) and his daughter, Ofelia (Mercedes Mason.  The riot is getting out of hand.  There’s gunshots, screaming and explosions.  Liza wants answers and the only answer Travis can give is that the dead are coming back to life.

Madison arrives home safely.  She offers Tobias a chance to stay with her family.  He declines and leave to be with his family.  Madison then enters her home and gives Alicia the medicine for Nick.  Travis calls her and tells her what’s going on.  He wants her to go to the desert without him.  She refuses to leave without him.  Before they can debate any further, the line goes dead.  Alicia hears a scream and sees a walker attack one of the neighbors.  Madison refuses to let her go help as she locks the door.  The look on her face reveals that she has little hope left.  Travis has the same look.  They both know they might die but they have to fight to protect their loved ones.

Quotes:
Travis (watching as his neighbor is packing up a car) Peter’s got the right idea.

Tobias: Hey Mrs. C, have you seen any of them yet?  I mean, I’ve only seen them online.
Madison: No, let’s hurry this up.

Madison: You can stay with us Tobias, until this is over.
Tobias: This doesn’t end.

Impression:
The last episode may seem slow to some, but this episode increased the tempo.  We didn’t see much zombie action.  We did see the principal, Artie, as a zombie.  I couldn’t see any bite marks.  There was a bloody wound on his back.  I wonder if Tobias killed Artie.  Tobias and Artie were the only ones in the school until Madison showed up.  If Tobias didn’t kill Artie, then what happened to him?

This show did offer a few subtle clues.  We saw one of Travis’s neighbors pack up his car.   Later that night, we see the car still in the driveway.  What happened to the neighbor? Shortly before the riot broke out, we see a paramedic tending to another paramedic who suffered a bite wound.  We all know what happens once you get bit.  I think the riot made things a lot worse.  I have a feeling the police will kill some of the rioters and they will come back as walkers.  How much longer until LA falls? The citizens need to leave now.