The riots are getting worse.  As he views the chaos outside, Chris spots a guy who’s ‘messed up.’  Travis warns him to stay away from the window.  Rioters begin to torch nearby buildings.  Travis and the others can’t wait anymore.  They need to leave right now.  They make their way through the riots.  Chris is horrified to see a looter attack and eat a cop.  Travis urges them to keep moving.  Just as they’re about to reach Travis’s truck, Griselda is hurt.  They get into the truck drive away.  Travis navigates the dangerous streets as he looks for help.  They find a hospital that is now a war zone.  Police officers are gunning down doctors and nurses who’ve turned into walkers. 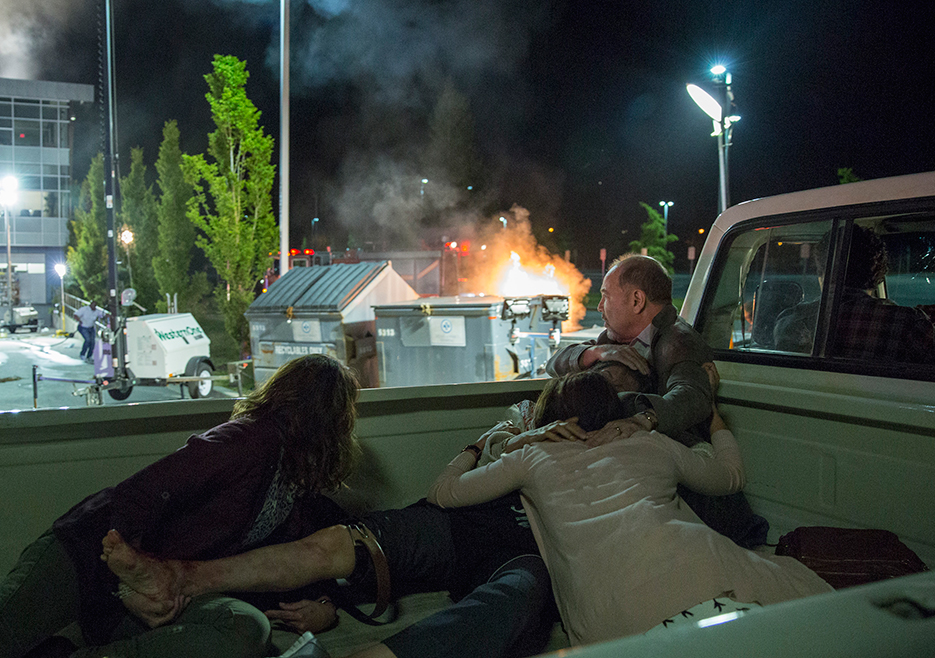 Madison is trying to keep Nick and Alicia calm.  She suggests playing a game of Monopoly.  It actually goes well until they hear a strange noise.  It’s a neighbor’s dog, covered in blood.   Nick points out the blood came from someone or something else.  Once inside the house, the dog goes to a window and starts barking.  Madison investigates to see a walker coming to the house.  Nick suggests going to one of the neighbors, the Trans, to get their shotgun.  The three manage to get into the Trans’ home safely.  After they grab the shotgun, the walker enters Madison’s house and attacks the dog.  Madison plans to stay at the Trans’ home for now.  That plan changes when Travis, Liza and Chris arrives with the Salazar family.  Madison and Nick rush back to the house to warn Travis.  Alicia goes back to get more shells only to see Susan Tran who’s now a walker.  As Alicia tries to escape, Chris comes to the rescue and saves Alicia from being eaten.

Travis enters the house as he calls out to Madison.  He recognizes the walker as his neighbor, Peter. Travis calls out to him as Peter turns around and attacks.  Travis tries to fight him off as Madison enters the house.  Daniel grabs the shotgun from Nick and kills Peter.  Madison and the kids want to leave immediately.  Travis thinks they should until the morning.  He points out that they don’t know if the roads are even open.  They’ll wait and leave in the morning.  The Salazar family will stay behind to take care of Grielda.

They split up into two groups.  Madison, Nick and Alicia take the car.  Travis, Liza and Chris take the truck.  Madison is about to drive off when she’s sees Susan’s husband, Patrick, come home.  She goes back to warn him.  Madison calls out to Patrick as he goes to his wife, worried for her.  She’s about to attack him when a gunshot rings out killing Susan.  Soldiers begin to swarm the neighborhood.  The US National Guard arrives and begins to round up the neighbors and the dead.  Travis is relieved.  Daniel isn’t so sure things will get better. 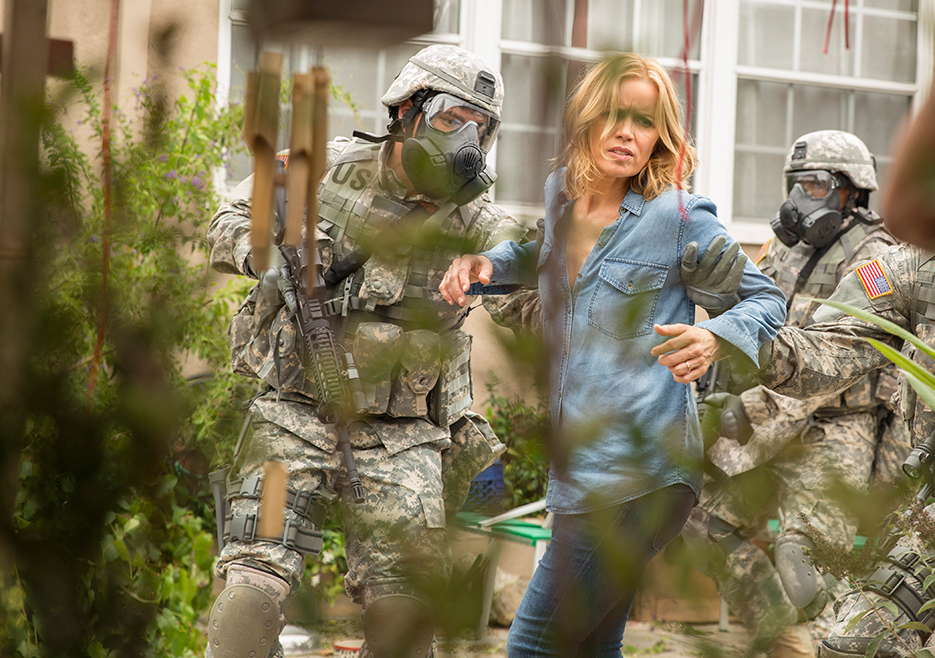 Quotes:
Nick:(talking about Susan Tran) She’s not sick, she’s dead.
Travis: Why would you say that?
Nick: Because it’s the truth.

Daniel: Good people are the first ones to die.

Travis: The cavalry’s arrived.  It’s going to get better now.

Impression:
This episode was slow to say the least.  I’m not saying it was a bad episode.  This show has set a more slow paced tone.  The Walking Dead is a combination of action and character drama.  Fear The Walking Dead chooses to focus more and the drama aspect.  I’m not sure if that’ll change in the future.  This particular episode focused on who the characters are.  Travis is a kind man who wants to protect his loved ones but also tries to look for a happy ending.  Daniel also wants to protect his family, yet isn’t afraid to shed blood if necessary.

There was a moment in which Madison made Travis’s ex, Liza, promise her to kill Madison if she became infected.  I think this scene could hint at something later on.  We know characters die in The Walking Dead world.  It’s just a matter of time before these characters die.  Daniel seems to know more than he’s letting on.  He knew to shoot Peter in the head.  He also mentioned to burn the body so the infection doesn’t spread.  His wife mentioned they left El Salvador.  I wonder if there was an outbreak there.  He also doesn’t trust the military.  Could he be paranoid or his paranoia justified?