Overview:
Ofelia is losing her patience.  She wants to see mother now.  She insults the soldiers as she throws bottles at the fence.  Ofelia is tired of being ignored and wants answers.  The neighbors ignore her cries.  They’re too scared to stand up to the soldiers.  Moyers ordered the soldiers to stop any disruptions.  One soldier, Corporal Adams (Shawn Hatosy) has fallen for Ofelia and tries to protect her by getting the other soldiers to stand down.  Adams offers to take Ofelia home to calm her down. 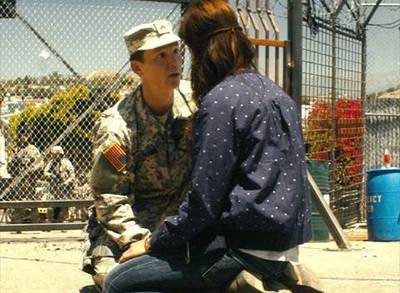 Tensions are high between Chris and Travis.  Chris wants to get Liza back and feels that Travis doesn’t care.  Chris thinks if Madison were taken instead, Travis would immediately take action.  Travis assures Christ that Liza is okay because she willingly left.  Travis tracks down Moyer and asks to see Exner.  He wants answers as to why people are being taken away. Healso wants to see Liza and Nick. Moyer agrees to take Travis to see Exner.  Along the way, Moyers receives a distress call from a squad who’ve encountered a group of walkers at a library.  Travis is ordered to stay in the truck while the soldiers take care of this situation.  An intense firefight breaks out.  The soldiers barely manage to escape.  Moyers doesn’t make it back so the rest make a hasty retreat.  The plan to see Exner is cancelled.  The only thing that matters now is survival.

Exner praises Liza on her work with the patients.  She’s short staffed and appreciates the extra help.  Exner tells Liza she lost a couple of nurses but won’t elaborate on what happened to them.  Liza wants to see Griselda and Nick to make sure they’re okay.  Exner promises to see what she can do. Liza and Exner have to deal with a fresh batch of arrivals.  One is a soldier who’s been bitten.  Exner warns that they have a strict protocol.  They can’t afford to take chances.  If they think someone has been bitten, they treat it like it a bite.  They have to protect the civilians.  Exner gets a chance to prove this when Griselda takes a turn for the worst.  Although her foot was amputated, her life is in danger.  Exner informs Liza that anyone who dies comes back.  She then pulls out a bolt gun to put down Griselda.  Liza insists on pulling the trigger.

Madison goes to Susan Tran’s house to look for Alicia.    She finds Daniel, Ofelia and Adams in the basement.  Adams is gagged and tied to a chair.  Daniel plans to interrogate Adams in hopes of bring Liza, Griselda and Nick home.  Madison is worried the rest of the soldiers will come looking.  Daniel needs information and begins to torture Adams.  He overheard a phrase, ‘Cobalt.’  Adams explains that ‘Cobalt’ is a military codeword for a plan that will exacutate the soldiers but ‘humanely’ kill the civilians.  He also recounts a moment where more than 2,000 people were locked in the arena after some of them turned.  The doors were locked and chained.  Daniel goes to the arena to see if this is true.  Sure enough, he can hear moans coming from inside the arena.

Quotes:
Moyers: I can do whatever I want, I got guns.  I mean, Christ, man.  The dead may be walking among us, still United States of America.

Travis: What happened to your face?
Soldier: Nothing, sir.  Momentary lapse of patriotism.

Chris: (watching a group of soldiers drive through the neighborhood) They’re not patrolling.
Alicia: Something’s wrong.

Impression:
It appears the calm is over.  We know there’s more danger coming.  First, the military is planning to kill the civilians.  It makes no sense other than the twisted logic that killing the people will prevent further infection.  I wonder if all military units across the US were given the same order as the unit in LA.  In The Walking Dead, we witnessed a scene in which helicopters dropped bombs on Atlanta, Georgia.

We were introduced to a man named Stand played by Colman Domingo.  Strand helped Nick by preventing some soldiers by taking Nick away.  Strand has plans to escape and needs Nick’s help.  I don’t think Strand is a trust worthy character.  Then again, he could come in handy during later episodes.  He does have the key to the holding cells.

There’s also the matter of the 2,000 walkers in the arena.   Oh sure, the doors are locked and chained.  Those chains aren’t going to hold forever.  The military and everyone in LA is going to be in for one hell of a fight.  Travis, his family, his friends need to get out of LA before those doors open.  When that horde of walkers escape, chaos will erupt and it won’t matter who deserves to die or not.  It’ll be a vicious battle and everyone will have to fight if they want to live.  Travis might not seem like a fighter now, but he’ll have to adapt to protect his loved ones and to survive. 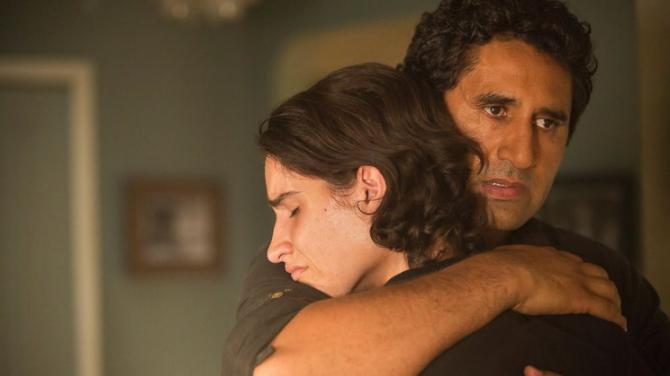