Overview:
The National Guard is retreating.  Madison and Travis realize if the National Guard is leaving, it’s no longer safe.  They’re packing up their stuff and leaving.  They meet Daniel in the basement.  Daniel tells them Adams gave all the information they can.  The gun is his hand hints at his next move.  Travis refuses to let Daniel shoot him.  Daniel knows their people are being kept in a compound.  Adams is willing to show them exactly where in the compound Nick, Liza and Griselda are.

As they arrive at the compound, Daniel greets a couple of the guards.  And right behind him are the 2,000 walkers from the arena.  The plan is to use the walkers to distract the guards.  The rest of the group will go inside and get Liza, Nick and Grisela.  Once they get inside, Travis instructs Chris and Alicia to leave if the others don’t come back.  Chris and Alicia stay behind to guard the getaway vehicle.

Soon,  Chris hears a noise and they hide in the SUV.  It’s three soldiers, looking for a way off the compound.  They demand the keys from Chris.  Alicia hands them over, fearing for their lives.  As the soldiers try to take Alicia with them, Chris tries to fight them.  He’s then knocked out.

Travis and Madison get into the detention area and look for Chris.  They find him behind a locked door with Strand.  Liza manages to open the door just in time.  They soon find Exner.  She’s sitting with the other patients.   Exner tells them how to leave the compound.  She’s determined to stay and do what needs to be done.  She knows the patient won’t be able to be evacuated and she won’t allow them to be eaten by the walkers.  She puts down each patient with the bolt gun. 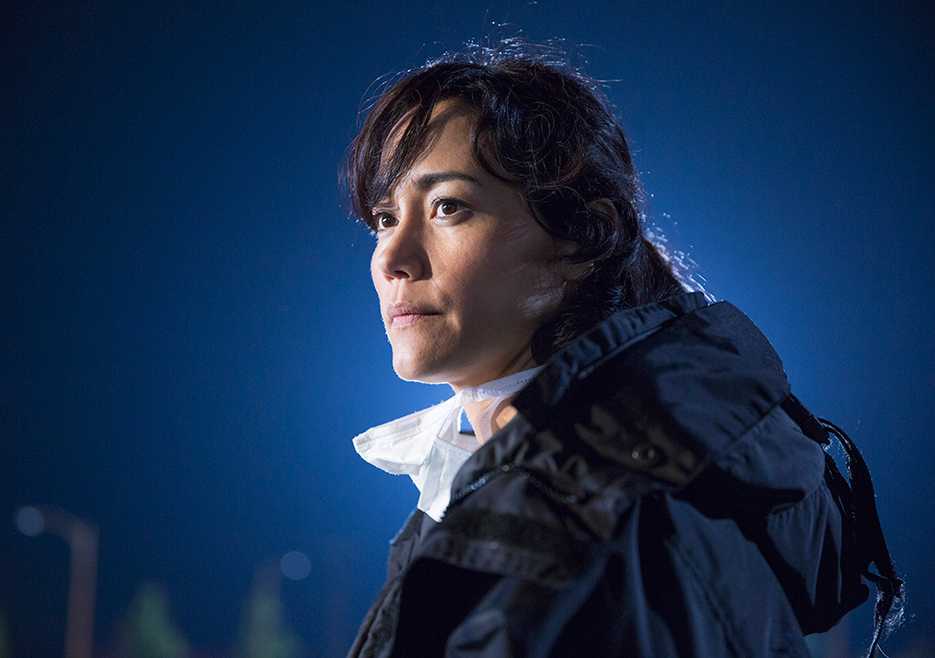 Travis leads the group to the underground garage.  He frantically looks for Chris and Alicia.  Chris tells his dad that the soldiers took the SUV and left them.  This reunion is shortlived as Adams comes out of the shadows, gun in hand.  He wants revenge on Daniel for being tortured so he shoots Ofelia.  Travis attacks Adams and beats him to a bloody pulp.  The group stops him from killing Adams and they leave.

They reach Strand’s beachside home.  The group make themselves at home.  Liza checks on everyone and takes a walk, enjoying the ocean view.  Madison senses something is wrong and follows her.  Liza shows Madison that’s she been bitten.  She doesn’t want to come back.  She tells Travis it’s not the bite that turns you, it’s the infection that follows.  Liza explains that no matter how you die, you come back.  Travis reluctantly shoots her.  He breaks down crying as Madison holds him. 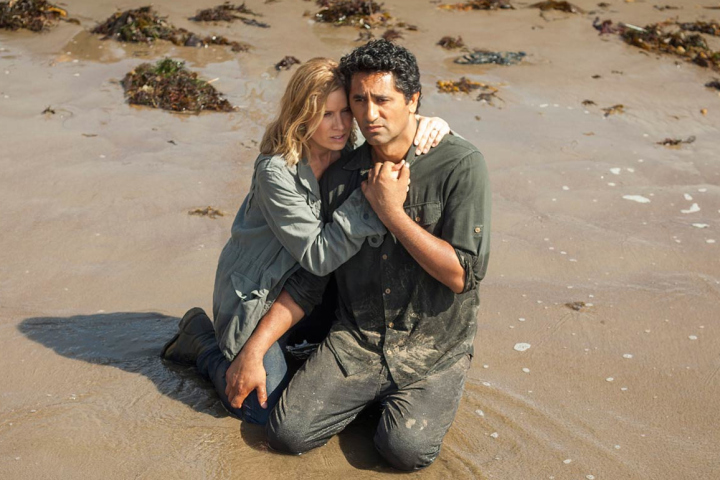 Quotes:
Alicia: I thought this was getting better.  I thought we were winning.

Ofelia: You lied to my whole life.
Daniel: I protected you your whole life.
Ofelia: Does Mama know?
Daniel: (pauses)
Ofelia: I thought you were the victim.
Daniel: Would you rather that be true?

Nick: Why did we come here if we’re not staying?  Are you insane, Strand?
Strand: The only way to survive a mad world is to embrace the madness.
Nick: Is that a yes?

Impression:
This episode did show some promise.  We got to see more into the characters.  Daniel was willing to torture a man to protect his loved ones.  Madison had no problem allowing him to do so.  Travis was against it.  Travis is by no means a violent man, until someone hurts an innocent person.

Yes, the scene where the walkers attacking the compound was exciting.  I’m sorry I just don’t buy the fact that Daniel was able to lead the walkers and not get attacked.  There was 2,000 walkers following him.  You think he’d at least get bit just once.  This show had a rocky start.  I do have hope for its future.  To all the readers and fans out there, what do you think?  Do you think the second season will get better?