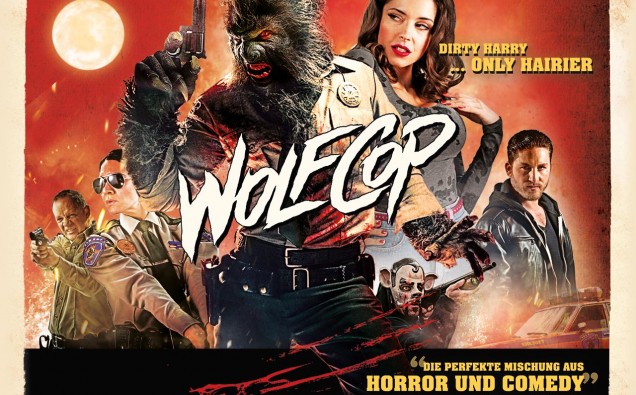 Alright guys, listen up! I just saw a new(ish) film that goes by the name WolfCop. Now I know what you’re thinking…what is this movie about? Honestly, I thought it was about vampires, but I was way off. It’s about a cop, who is also a werewolf! Who would’ve guessed, right? It the tradition of ‘80s buddy cop films, this dark comedy is full of action & bad one liners that will satisfy anyone who has cravings for those things…whoever that may be. It’s not a great movie, but it is quick-paced & highly entertaining. Lowell Dean, the director/writer of the flick, definitely knew what he wanted to do & made it happen. So, we all know it’s about a werewolf cop, but what’s the context? Let me tell you!

The story follows an alcoholic cop (Leo Fafard) who isn’t really good at what he does…at all. However, one night when he’s investigating a disturbance in the woods, he comes across a cult that captures him & uses him as part of some ritual. The next day, he wakes up in his own bed with stronger senses & a pentagram carved into his chest. That night, under the full moon, he goes through his first transformation into a werewolf, which is pretty cool. A lot of skin is pulled off, blood shoots everywhere, all that good stuff. After going through that painful experience, he decides to use his newfound abilities for good, becoming the hero known as WolfCop.

Yeah, it’s pretty silly…but also awesome. The film never drags on like a lot of other similar films do. It’s knows what it’s audience want, & does so quickly while still maintaining a somewhat comprehensible story. It’s very fluid (surprisingly) & while the last few scenes aren’t as entertaining as the rest of the film, they aren’t bad. Not by a long shot. With barely an 80 minute running time, it does a lot & never feels like a waste of time.

The acting is pretty good, actually! Leo Fafard (Tideland, Grace) does a fantastic job as WolfCop & portrays a really likeable character. The other actors also do their job nice, especially Amy Matysio (Just Friends, Stranded) as WolfCop’s partner & Johnathan Cherry (House of the Dead, Final Destination 2) as the comedic best friend. Pretty solid all around!

The effects are cheesy as hell, without a doubt. Overall, the WolfCop himself looks great from the neck down. His face, however, could use some work, but it’s by no means distracting. After a while, it all just blends in together in a mixture of blood & gore. The fight scenes are well done, & it mostly uses practical effects (which is always a plus). Basically, it doesn’t disappoint!

This is definitely a flick worth checking out. It doesn’t take itself seriously at all, & is just a ton of fun. Besides…WolfCop…come on, that just sounds awesome!