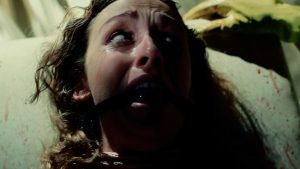 As a fan, radio host and journalist, I attempt to support the indie and underground horror film movement. I watch, talk up and support these projects as much as I can. Some horror projects come and go, sinking into the dark sea of horror films and content. Some float and sustain being supported by the community being remembered. A very small percent go above and beyond to become legend. For quite a while, I have waited to view Debbie Rochon’s directorial feature film debut. With nearly 250 acting credits to her name and one directorial short film credit as well, I had hopes that MODEL HUNGER would be something impactful and a reward to the career Rochon has had for nearly 35 years. Why Rochon’s career has been primarily a part of the lower end of cult and horror cinema, she is a film star and one of the most respected woman on the horror scene within my generation. It should all point to a quality, fun and dirty horror film… well not for me. 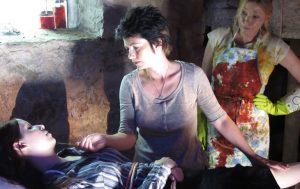 Assembling a cast and crew that features many indie talents including a strong and generational female set of actresses like Tiffany Shepis (Nightmare Man), Suzi Lorraine (One Night of Fear), Kaylee Williams (Slices of Life) and Lynn Lowry (Pretty Fine Things and Trinity), we see great pieces brought together both in front and behind the camera that in total offer something very underwhelming. The film MODEL HUNGER revolves the themes jealousy, regret, body image and reality. These themes are woven within the story of Ginny Reilly (Lowry) who is a broken, retired pin-up model who is bitter and vengeful towards the wastes of young women that come to her door for one reason or another. As she plays a black widow esque character that baits anyone that enters her door, she traps them. She kills them and… well you get the idea from the title, she consumes them. Having a set routine, she loses control of her mental instability with the idea that body image has changed from her younger days and she was treated like trash for her body image as a model. This storyline is crossed with the character of Debbie Lombardo (Shepis) who along with her husband Sal (played by the diverse Carmine Capobianco) has moved from the city to the suburbs for a fresh start. Debbie is in denial dealing with mental illness and is having trouble adjusting to her new life and failing marriage. As Debbie settles in, she like Ginny is entranced with the show SUZI’S SECRET which address the reality of body image versus what the mindset is of today’s society overall. As Debbie watches the neighborhood (perhaps seeing things or not) and the seductive television program, she suspects that her neighbor Ginny is doing something horrible to those all around her whether male or female. With each person that enters Ginny’s home, Debbie and her neighbors must confront Ginny and stop this madness. 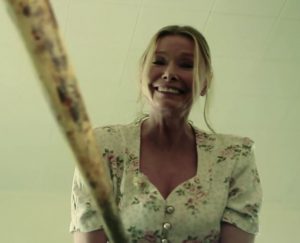 Not only is MODEL HUNGER Rochon’s feature film debut but it is writer James Morgart’s first feature film screenplay as well. Hats off to them both for getting a feature made period! In the ocean of film and content, many ideas never see the light of day let alone any stages of production or distribution. It makes me happy even with the long wait to see that this project could come together with some really great people steering it to a DVD release. However, that does not excuse the fact that I feel this film spent more time on hiatus then following through for the viewer with a cohesive and tighter feel to the film. With an overall style of a dirty, underground grindhouse experience reflecting somewhere between the 1970’s and 1980’s, MODEL HUNGER is low-budget, sleaze cinema for the masses.  The sets, performances and exploitative ideas executed make me wish I had seen this on the big screen at an event like SLAUGHTER IN SYRACUSE. Lowry is her always incredible self as the bitter, broken and vengeful lead that portrays through effective and frightening expression as well as chilling realistic execution of dialogue, what I believe to be more truth her lines than fiction towards the way the business is and the stain it leaves. She is the brightest spot within this film with the rest of the cast handling their roles with a large degree of realism and execution but seem to have a shortcoming. I am not sure whether it is the material offered or the performances or even the final focus of the edit but something seems to be missing. Take my opinion for what you will but seeing talents like Capobianco or Shepis or others, you shake your head on why their characters were not flushed out more in the narrative. I understand this is showcase piece for Lowry and Lorraine’s characters but felt unbalanced to the point you wondered why the married couple were involved at all or not enough? How many victims were really needed? Was eating bacon or more scenes of SUZI’S SECRET or the garage needed to be features as much? 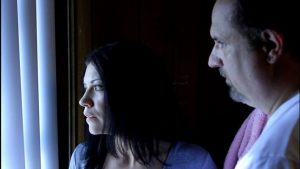 MODEL HUNGER has it charm and a spirit that empowers through these characters sending a message to the new generation of women who feel entitled, enjoy excess and have lost their way. It does succeed also in that gritty underground style of filmmaking with paced and brutal torture, kills and violence that is infused with a clever build up. Lowry looks like she is having fun extracting bloody revenge on many different characters in a variety of different and vicious ways. The lighting in the basement along with Wolfgang Meyer’s experience, detailed eye and framing gives a perspective that is both voyeuristic and at time makes you feel very uncomfortable. Between the performances, the wicked humor, Debbie’s denial and growing paranoia as well as the representation of Ginny’s layer, you see the pieces come together in a true cat and mouse type of film that again could have been developed more but I accept it for the film it is. One aspect that leaves you uneasy, is the impact and commentary in the SUZI’S SECRET segments which not only used as a tool to create a bizarre but empowering message but reflects the ideals, influence and obsession found for me within the surreal narrative of VIDEODROME. This along with the very talented and generational women of horror makes happy to see this effort finally come forward.  Pick up a copy right now through WILD EYE RELEASING and watch the trailer of this gritty thriller from DEBBIE ROCHON at https://www.youtube.com/watch?v=07boIjkuSW4