Don’t take what doesn’t belong to you 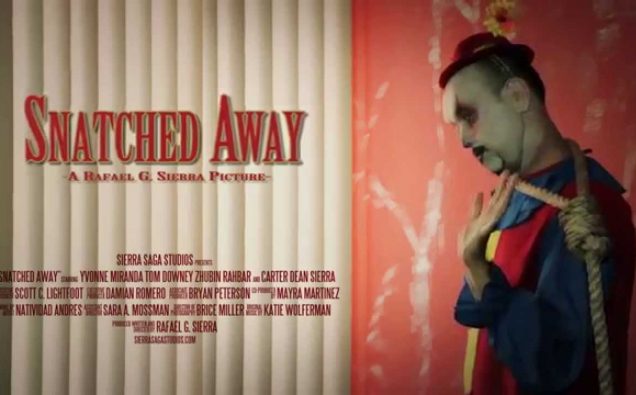 A recent winner of “Best Supernatural Horror Short” at the 2016 Haunted Horror Film Festival in New York, the short film Snatched Away is a perfect comment on what I like to call karma. Whenever we turn on the news or look at the internet, we see bad people getting away with all kinds of horrible things. I always hope that these jerk-offs have karma come down on them hard and that the universe will make things right.

Snatched Away synopsis: Snatched Away is a supernatural story about a woman named Belle, being haunted in her poverty-stricken apartment. Very soon you come to find out that Belle is not what she seems. The story works really well and I was relieved at the end to see the supernatural forces, that came into her apartment, take care of the problem. Writer, director producer, Ralphy Sierra, put a lot of love into this shoot, using his own apartment, dog and even his baby son as one of the stars! The film was creepy and beautiful at the same time. I liked it a lot. Since Snatched Away is only 7 minutes long, I don’t want to share more, It would spoil the ending. You can go to the Sierra Saga Studios YouTube and see the film yourself!

I got a chance to talk to Ralphy briefly about the motivation for the film and get some behind the scenes info!

Los Angeles Zombie Girl: Hi Ralphy, can you tell me a little about yourself?

Rafael Sierra: “I go by Ralphy but my name is Rafael Sierra and I was born in Bronx, NY & raised in Tampa, Florida. I’ve been of here in California for 7 years now. I went to Full Sail University in Florida and I moved out here after I got my bachelors in film and television. I have work on a lot of projects as a BTS shooter/editor and Art Dept. guy, but like many people out here in LA, I want to write, produce and direct films and TV series.”

LAZG: Tell me a little bit about Snatched Away.

RS: “Snatched Away was a no-budget film that cost about $1500. Because we had no budget, I had to wear many hats. My titles included, director, writer, producer, editor just to name a few. We had a 13 person crew. We shot it in August 2015 in Pasadena, CA. Snatched Away was produced by my indie film company, Sierra Saga Studios. My dog, Bambi was the dog in the movie. Carter Dean Sierra, also known as the baby in the movie, is my son. Also, my apartment in Pasadena, CA was the location for the movie.”

LAZG: How did you come up with the story?

RS: “This story was a somewhat true story. One day while I was washing dishes, I could have sworn I saw someone or something coming towards my front door, just like Belle did in the movie. I saw it a second time so I went to investigate and I saw Bambi standing in front of the door. So, I immediately went to the same bedroom and didn’t try the door. I looked out the window as Belle did and just like the movie, no one was standing there. I remember thinking to myself that, ‘this is super weird and creepy’ and the idea about a baby snatcher and the twist came to me. I immediately wrote it down and a year later I shot it. Keep an eye out while watching the film- there’s quite a few hidden GCI ghosts in the background!”

LAZG: What’s next for Sierra Studios?

RS: “I never want to be labeled to what genre I do. I want to do everything. My first short film was a love story drama called The Wallet. I remember at the world premiere in Florida I had people tell me that they cried when they watched it. I thought to myself, ‘Next, I want to do something that will scare people.’ Snatched Away was a pretty good start. I would love to make all type of genre films, from horror to drama also action, comedy, animated kids movies and television series’. I want to do it all!”