Following the Blood Brick Road: A Look Back at The Wizard of Gore

Intestines and Murders and and Disembowelments, Oh My! 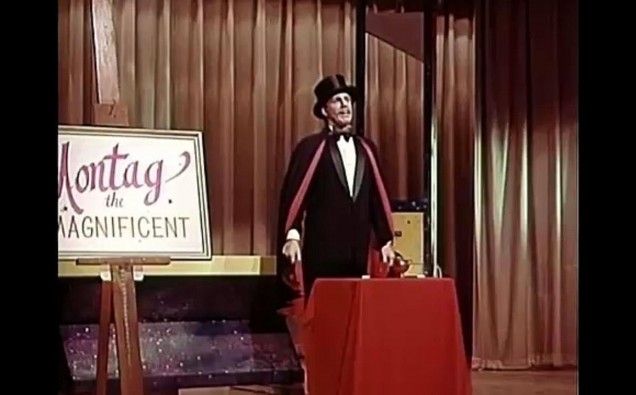 Hershel Gordon Lewis had a lot riding on The Wizard of Gore. It had been five years since the last movie in his Blood trilogy, the disappointing Color Me Blood Red, and one of the first gore films he made without the help of longtime producer David Friedman.  But it is only with tremendous pressure that the great mountain chains of the world erupt from the Earth, and it is with this same pressure Lewis made his own Mount Everest, a true masterpiece of gritty, blood soaked exploitation cinema, The Wizard of Gore.

This is the kind of film that makes gorehounds howl at the moon. The murders are creative, excellent and frequent, the victims voluptuous, and the killer a complete loon. A nutty magician who christens himself Montag the Magnificent, the insane illusionist dispatches his victims with just about every nasty instrument of torture you can think of. Spikes, saws, a punch press; it’s an array of spiky metal death tools that would make a dentist proud. 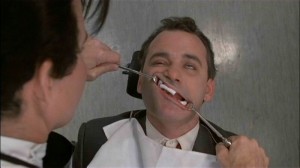 The Wizard of Gore isn’t just your run of the mill bloodbath though, especially in comparison to some HGL’s earlier work. Rather than just a string of senseless killings there’s actually some decent acting (no Playboy models here), and a genuinely intriguing mystery. The catch to Montag’s murders is that he commits then in front of an audience; its actually all a part of his show. But after the trick is finished the volunteer gets up seemingly unharmed from what should have been a fatal injury. Having a spike hammered through your brain is not generally a healthy action to partake in. 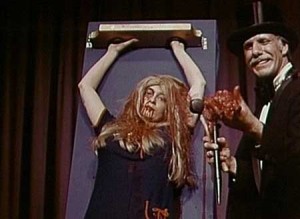 However, each and every participant in the mad magicians act is found murdered in the  way they were offed in the show. Is it simply the actions of a crazed killer with magic on the mind? Or is it something altogether more sinister? By Wizard’s conclusion, it’s largely up to the viewer to decide what they think happened with an ambiguous and rather bizarre ending that leaves everything seen before in question. Some of this dream like quality might simply have been the writers trying to fill in plot holes, but accidental or not it works making this more of a thinking man’s gore film than anything Lewis had made before. Now it’s not like anyone is going to mistake The Wizard of Gore with Hamlet, but it’s at least a more thoughtful exercise than anything we’d seen from the Herschel previously.

This is all helped along with acting that probably won’t be getting any Oscar nominations, but is at least fucking watchable. That’s a hell of a lot more than Blood Feast and Color Me Blood Red could say. In particular Ray Sager gives off an awesome performance as Montag. His acting might be hammier than a hog farm, but damn if the old bastard isn’t entertaining. Ray actually went on to have a pretty successful career as a film producer (he was one of the twisted minds behind the Prom Night sequels), but it’s a shame he never had any other major work in front of the camera.  It’s Sager’s performance that really brings some magic into what could have been a substandard role.

Of course though, all the good acting and storytelling in the world is just so much glitter and sparkles if the main act isn’t up to par, and you don’t have to be goddamn Sherlock Holmes to figure out what the main act of a GORE film would be. And just like I said before, The Wizard of Gore has some absolutely magnificent showings of bloodshed, the best of it’s time, and still ridiculously brutal over 40 years later. It would be a crime to spoil the depravities this film has in store for viewers, and I won’t do it here, but suffice to say there is enough blood spilled to paint a funeral home red.  Many of the murders are magic acts turned on their head with stomach turning twists, while other kills are less creative but equally effective in their cold methodology, but each and every one of them ranks among the best in exploitation history. 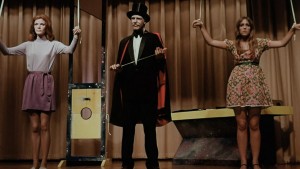 If you really love trashy, bloody, exploitative film, and you haven’t seen The Wizard of Gore your truly missing out on a cinematic classic in nastiness. One of the best films of its kind, The Wizard is gory, reprehensible,unapologetically crass, and one of my favorite exploitation movies of all time. It almost makes me forgive Lewis for Color Me Blood Red. Almost.

Jeff is a writer for The Blood-Shed and eats, drinks, and bleed horror. You can help him write his first book here.