From Dusk till Dawn The Series

A review of Robert Rodriguez's creation, and the transition from big to small screen. 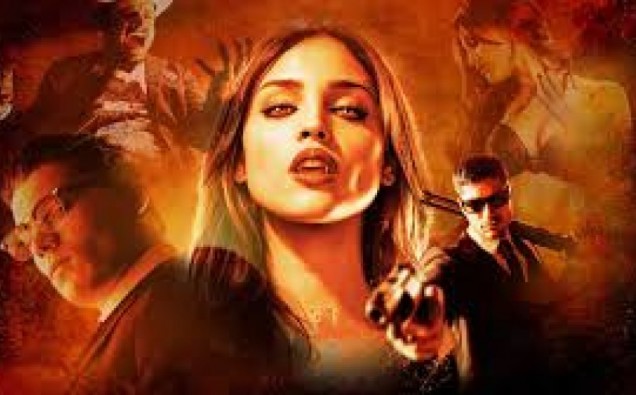 In 1996, the film From Dusk till Dawn was released. Written by Quentin Tarantino and directed by Robert Rodriguez, it featured a murderous subterranean vampire cult masquerading as a strip club, a pair of bank-robbing brothers on the lam, a recently widowed minister and his children, and a nearly naked Salma Hayek sticking her foot into Tarantino’s mouth.

In the new television series of the same name, Rodriguez reboots the story and expands on the Mesoamerican mythological elements. A new character has been added, Texas Ranger Freddie Garcia. All of the original roles have been recast, but the bones of the story remain the same.

The series opens with a creepy bit of foreshadowing, as a terrified woman is thrown into a pit of snakes. She is bitten repeatedly and a giant python slithers into her mouth. Meanwhile, Richie Gecko (played by Zane Holtz) has just busted his brother Seth (D.J. Cotrona) out of jail. The pair proceed to rob a bank, killing four Texas Rangers and two police officers and taking a teller hostage in the process.

The Geckos head to Benny’s World of Liquor, with Texas Rangers Earl McGraw (Don Johnson) and Freddie Gonzalez (Jesse Garcia) hot on their trail. During the ensuing confrontation, Richie has a vision in which he is tormented by demons and tantalized by a beautiful woman. McGraw is killed in a botched hostage situation, and Freddie learns from drug lord Carlos Madrigal (Wilmer Valderrama) that the Geckos are heading for the Mexican border on their own. 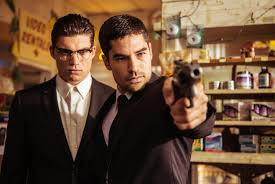 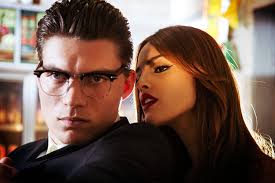 Also on the way to Mexico are Jacob Fuller (Robert Patrick), a minister who has recently lost both his wife and his faith, his daughter Katie (Madison Davenport) and his adopted son Scott (Brandon Soo Hoo).  Seth commandeers the Fullers’ RV after a shootout with law enforcement, and the five of them head south. Gonzalez pursues them, eager to get revenge for the killing of McGraw, his partner and mentor. 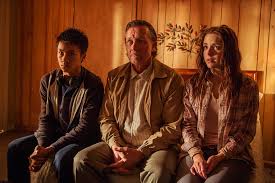 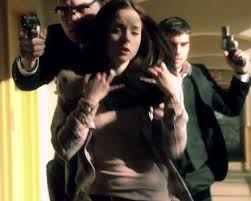 Once in Mexico, they stop at a strip club called the Titty Twister. As the headlining dancer Santanico Pandemonium (Eiza Gonzalez) performs, she and the other strippers turn into snake-like vampires and attack the patrons. 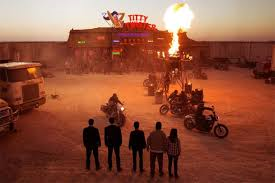 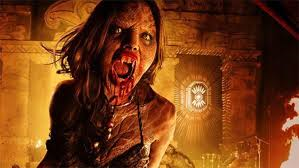 The Geckos and the Fullers survive the first wave of attacks and meet Professor “Sex Machine” Tanner (Jake Busey), who explains the mythology of Mesoamerican and what the Titty Twister actually is: a bar built on top of an ancient temple, sacred to a blood cult who turn into vampires by night, trap the customers inside, and feed on them. 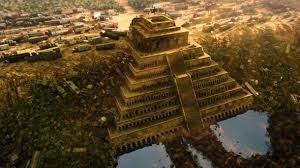 The Gecko brothers are forced into a labyrinth where they must put their lives on the line. Not only do they face their worst fears, they relive their worst memories in a heist like scenario. The ending of the series doesn’t leave many questions, but it leaves you wanting much more.

This series is worth watching for many reasons.

Zane Holtz is up for a Fangoria Chainsaw award for his performance as Richie. Holtz did a tremendous job portraying the character, who had a much deeper role in the series than his rapist persona in the film.

The production values are superb, highlighting the empty spaces and arid deserts with a palette of washed-out, dusty browns and oranges then switching to amped-up, highly saturated tones when the supernatural madness kicks into high gear.

Rodriguez used the opportunity in the series to explore the back story of the Fuller family and the Geckos, adding more depth to every character. This was something Rodriguez was unable to do in the film because of time constraints. You even get to meet Seth Gecko’s ex-wife Vanessa Styles (Adrianne Palicki), who helps Seth escape from Big Kahuna Burger. 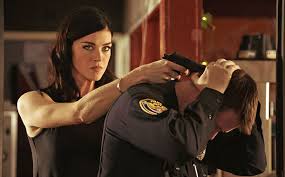 From Dusk till Dawn the series is very enjoyable and entertaining. Rodriguez did a wonderful job transitioning from the big screen to the small screen. Both the series and the film are available on Netflix.

Season 2 will air on Robert Rodriguez’s El Rey network; the premiere date has yet to be determined. Danny Trejo has recently been recently added to the cast, and the series will pick up where the first season ended.