In Furs: A psychedelic head trip into a reality of drugs and madness 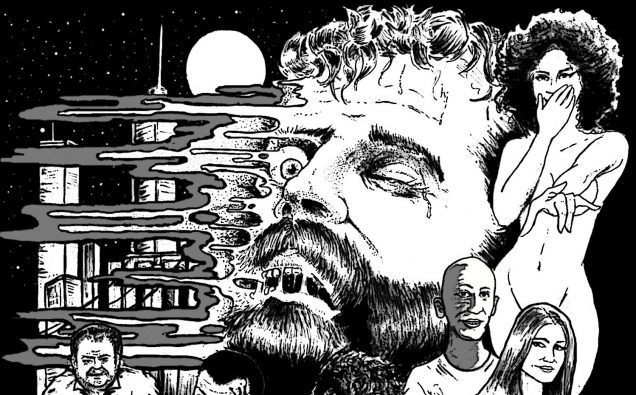 I love me some mindfuck indie horror. When I was sent the screener for In Furs, I had no clue what sort of movie I was getting into. It definitely did not disappoint though.

In Furs is a film by Christopher Bouchie about

“Loss and the lengths that some will go to gain control.  Earl (Vito trigo) is an average guy, he lives within his means alongside his fiance Molly (Rachel Rose Gilmour).  His picturesque life of normalcy is shattered when he awakens in an parallel universe.  Gone are the clean sheets and warm embrace of Molly, replaced with a mattress on the floor of a squalid New York apartment and the companionship of a drug addled stripper (Sarah Schoofs).  Unnerved by his surroundings, Earl struggles to gain composure but is drawn to the vices of his alternate life, namely heroin. Unfortunately for Earl, the bottom of the barrel grows deeper and deeper when he realizes that the drugs he’s taken are ultrapotent and not exactly what he expected.  Earl, in a psychedelic stupor sets out on a quest to climb back to reality by any means necessary.  But reality seems to grow further and further away as Earl bludgeons and thrashes his way through the streets of Queens.  What he finds at the end of his journey isn’t what he had expected, and this drags him right back down to where he started.”

It’s as strange as it sounds and is wonderfully, creepily messed up. The film really illustrates the concept of what can happen when you take a normal person and put them into non-normal circumstances. It’s like the Joker has said: the only thing that separates the normal folk from the insane is one bad day.

I love how this film that incorporates drugs as such a central part of its story actually goes the distance to feel like an actual drug trip. It walks the line between arthouse and extreme horror. Also of note, I like the way they utilize Earl’s dead friend. It reminds me of the usage of the walking damned from the American Werewolf films and offered a little bit of comedy relief in a film that is otherwise sometimes weird, sometimes dark, sometimes both. The acting was superb, especially Vito who is an alum from films such as Pig Pen and Return to Nuke’Em High.

Scope the trailer below!