Road Warrior meets Rollerball at a NASCAR race, with significant inspiration from Ben-Hur? 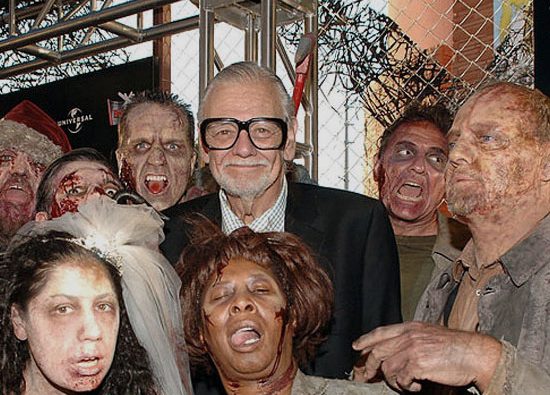 I am a zombie fan, it’s in my name. But I think George A. Romero, director of the legendary Night of the Living Dead, may be going a little too far. The guy who brought us some of the top fan favorite zombie films, is working on a new project that goes a whole different direction for zombies, in fact they drive there. Did you guess? It’s a movie where zombies drive race cars to entertain super rich people.

The film is called George A. Romero Presents: Road of the Dead, and it’s being put together with the help of the Fantasia International Film Festival. Romero directed the last three “of the Dead” zombie movies, Land of the Dead, Diary of the Dead and Survival of the Dead, but will only co-write and produce this film. Matt Birman, a long-time Romero collaborator, also co-wrote the film and will direct.

According to Indiewire, “The story is set on an island where zombie prisoners race cars in a modern-day coliseum for the entertainment of wealthy humans. Birman describes the project as Road Warrior meets Rollerball at a NASCAR race, with significant inspiration from Ben-Hur.” Huh? So the future, mixed with the past, some awesome cars, add zombies and mix well. Could be cool and have some political commentary or just be a big campy mess.

I’m not a NASCAR fan, but I like Mad Max, so I will have to wait and watch the trailer, when it comes out, to decide whether I want to see Road of the Dead. If it’s like Road Warrior, can Mel Gibson be in it? That I would like to see!

Ok I apologize in advance- this reminds me of a really bad zombie joke. What do you call a zombie race car driver? A Paul walker! I know about as tasteless as the idea of this movie. Sorry.

So, what are your feelings about yet another campy zombie movie? Have we had enough or do we want more George A. Romero fun?