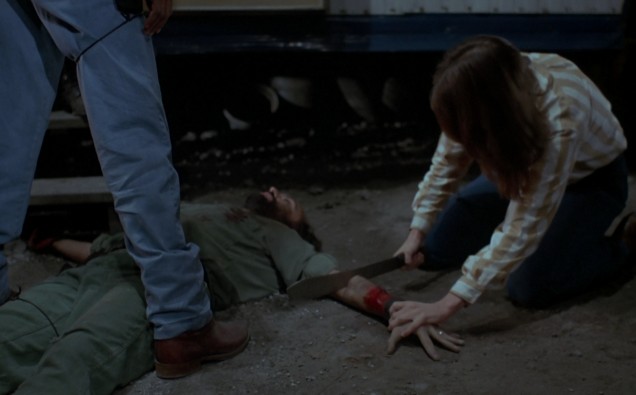 Previously, I covered The Old Dark House.  This time, I’m talking about:

Written and Directed by: George A. Romero

The reputation of Day of the Dead among Romero fans often reminds me of the reputation of Return of the Jedi (1983) among Star Wars fans. Following the genre-defining original and the deeper, more complex sequel, it seems to be thought of as the chapter that fell short of its potential. Sure, it’s regarded as worlds better than the original filmmaker’s latter-day follow-up trilogy, but the hard-core fans still tend to turn their noses up a little.

Now, there’s no accounting for taste, and I’m not gonna sit here and tell anybody what they should or shouldn’t like, but I find Day of the Dead’s rep a little baffling, to be honest. I’m definitely not one of those who believes that the more elaborate unproduced version of Day would have made for a substantially better movie, as I discussed here. Maybe there’s just an element of nostalgia at play – I do have fond memories of sitting up late at night with my dad watching the movie on many occasions – or maybe this is that rare case where the gorehound in me is making the final call, because even the detractors have to admit that there’s some truly spectacular blood and guts work in Day.

One aspect of Day of the Dead which I passionately stand by is the performances. All of Romero’s classic Dead trilogy were basically ensemble movies. Night of the Living Dead (1968) got a few effective, naturalistic performances out of the largely non-professional cast, but there are few real stand-outs, and there are a few glaring weak points. The four leads in Dawn of the Dead (1978) do great work, but many of the actors in smaller roles just don’t match up. In Day of the Dead, though, nobody is off their game. Many, if not most, of the performances are broad and melodramatic, and some viewers seem to treat that as innately a fault, but objectively, it’s a valid aesthetic choice, and one to which the cast commits themselves admirably. The effect is not remotely naturalistic, but it’s not supposed to be; some people just grade these performances on the wrong rubric. 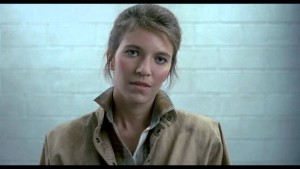 Lori Cardille’s Sarah is the closest thing any movie in the original Romero trilogy had to a traditional lead character. She is the lens through which we see this crumbling world, and she is the one character actively invested in keeping everyone safe, sane and working together. She’s been hardened by the things she’s seen, and on the surface even seems numbed to it all, but her idealism remains; her pragmatism is accompanied by a heartfelt belief that the world – the human race – really is worth saving. Cardille’s is the most down-to-earth performance in the movie, nuanced, believable, and an anchor which allows for the broader strokes with which most of her co-stars play. 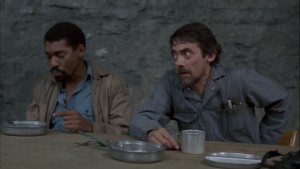 Terry Alexander and Jarlath Conroy, respectively John the helicopter pilot and McDermott the radio operator, are an interesting breed of cynic. They are, superficially, the most likable characters in the movie; they’re charming and funny, John speaks with an unpretentious sense of moral authority, and McDermott is loveably snarky. Alexander brings an earnest gravitas to John, while Conroy is all charisma. 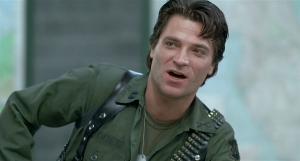 This brings us to probably the most divisive performance: Joe Pilato as the power-drunk, malicious Captain Rhodes. Pilato’s Rhodes is anything but a naturalistic performance; it seems the man never met a line that he couldn’t spit through half-gritted teeth or resolve in a crescendo of shouting, and he often flips between the two modes seamlessly. And from where I sit, it appears as absolute perfection. Rhodes is the expressionistic embodiment of impotent authority, a man half-smart, half-strong, in over his head, firing his rage blindly at anyone who crosses his path. It’s a powerhouse of a performance. 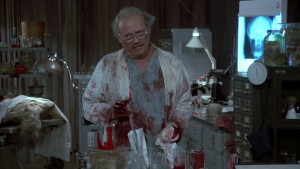 And Pilato has his perfect sparring partner in Richard Liberty, as the equally driven, equally mad Dr. Logan. Like Pilato, Liberty’s performance is a theatrical one, which will be an immediate turn-off to any audience members who favor bland verisimilitude over exuberant melodramatics. But these characters do not exist in natural circumstances. What matters is that Liberty’s performance is rooted in genuine emotion; as broadly as he may play his mad scientist, he’s never just playing the mad scientist. The roots of his madness, the drive, the pain, it’s all informing the way that Liberty rants and raves, the nature of his ticks and his chuckles and his sudden changes in tone. 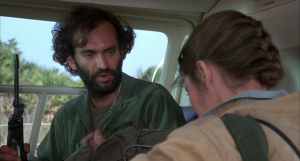 As Miguel, Antonè DiLeo mostly has to vacillate between playing hysterical and comatose. As with Pilato and Liberty, DiLeo is called on to give a broad, theatrical performance, but it is always rooted in understandable pain, fear, and insecurity. A lot of people complain that the character’s suicide scene doesn’t make any sense, because the character’s psychological motives aren’t explicitly explained in dialogue, but DiLeo conveys Miguel’s mindset so well through expressions and body language, the sequence feels entirely emotionally true; the scene works perfectly and makes absolute sense in the context of DiLeo’s performance. 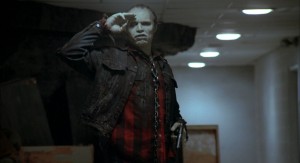 There’s one performance in Day of the Dead that it seems everyone can agree on the brilliance of: Sherman Howard (working as Howard Sherman) as Bub is a revelation. Bub as a character takes some ideas that were hinted at in Dawn of the Dead and expands upon them exponentially, totally redefining the “Romero zombie.” Howard’s performance as a sensitive monster struggling to understand and relate to his surroundings as he did in life is comparable both in its nature and in its masterful execution to Boris Karloff’s first two turns as the Frankenstein Monster (in Frankenstein [1931] and The Bride of Frankenstein [1935]). 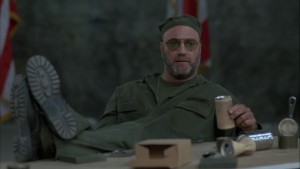 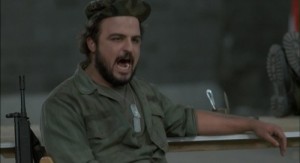 Next, we come to G. Howard Klar and Ralph Marrero as Steel and Rickles, the most developed of Rhodes’s grunts. On paper, these are fairly flat characters, but Klar and Marrero both find ways to make them stand out. Steel may be crude and mean-spirited, but Klar also plays the character with an understated intelligence, always paying a little more attention to what’s going on than his fellow soldiers, certainly more aware than his compatriots of their commander’s mental degradation. Although Steel is ultimately ruled by self-interest and his own will to survive, he shows shadings of a moral sensibility, an unspoken apology for the nasty things he allows himself to do. Marrero’s Rickles is another story altogether, stupider and crazier than Steel, a bully by nature. Where Steel is attentive, Rickles – whether by nature, or as a result of madness brought about by their circumstances – is totally without comprehension of either the real danger that surrounds them or the moral depravity of his own actions or anyone else’s. He is a broken bully, and even seems to take some pleasure in their situation; one feels that the world has never been very kind to Rickles, and the apocalypse has given this loser a chance to feel like he has some power for once. In a way, he is comparable to Dwight Frye’s Fritz in Frankenstein. 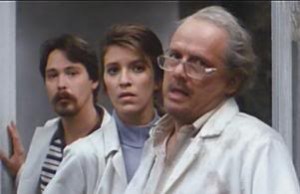 Among the major characters, the leaves only John Amplas as Dr. Fisher. Fisher is the forgotten character of Day of the Dead, a seemingly nice guy, a professional who has kept his head together, but also kept it low. He is as unnoticed by most of the rest of the cast (his only significant interactions for most of the movie are with Sarah) as by so much of the audience. But Fisher’s bland niceness makes his death at the hands of Rhodes all the more shocking; Fisher is not really against anyone, so killing him is a totally meaningless act, violence enacted purely for display. While Fisher may not leap out at viewers on initial watching, repeat viewing with an eye on the character reveals the quiet naturalism of Amplas’s performance. Although he’s usually in the background, he’s always emotionally present in the scene, watching the drama play out among the bigger, more outspoken characters, with reactions that mirror those of the audience. When Fisher is taken away, we do not lose a big plot mover, but we lose the person with whom most of us can share a perspective; with Fisher gone from the narrative, so are the everyday, middle-of-the-road folks.

Day of the Dead is too often discussed in terms of what might have been, and many viewers fail to appreciate what really is there: the strongest ensemble performances in any of Romero’s Dead series.

Make The Blood Shed your place to discuss all things horror, and don’t forget to check out our Facebook page!