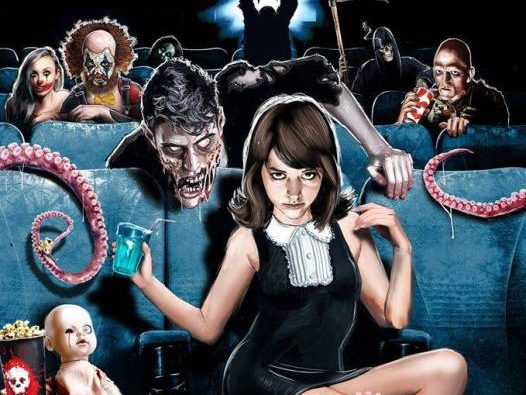 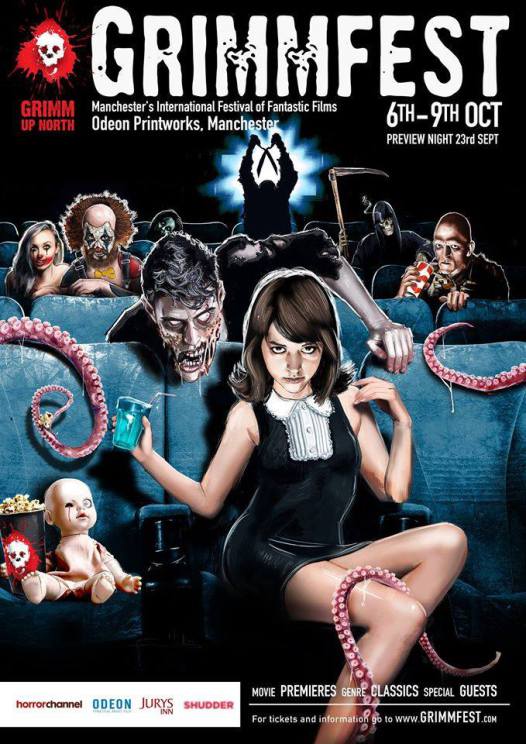 Last month I travelled to Manchester for Grimmfest (A indie and classics horror film festival) for  the third year running (for my review of last years see https://www.facebook.com/davidjenkinswriter/posts/176558612681606?comment_id=176574656013335&comment_tracking=%7B%22tn%22%3A%22R%22%7D) As normal I was exposed to many films I wouldn’t have watched otherwise and not just because they might not all end up on dvd.  I managed to watch over 9 hours of film for only £25 a bargain in anyone’s book when I enjoyed all but one film. Lastly before I review all the films I saw I’d just like to point out that my main complaint on the festival from last year that there isn’t enough breaks between films to grab food from anywhere but cinema has been rectified with an hour break between 6 and 7. Now onto the films.

First up was Observance an odd titled film that made me expect aliens or some sort of creatures and the stunning opening location shots of the sea and cliffs, emphasising the roughness, darkness and ominous of them made me think I was right. I couldn’t have been further wrong. Parker is giving the task of watching Tenneal in her apartment but he doesn’t know why then strange things start to happen in the house he’s in. Like several of the films shown today there was a strong sense of claustrophobia. The use Parker’s camera to see Tenneal is unique as it doesn’t show a full story as you can only see through the three windows leading you to guess what is happening. The story as well never fully gives itself away how did Parker’s son die, what is the strange thing in the house with Parker and how is it affecting Tenneal? Is it a curse? Is it heredity? Is he infected by something in the house? This film kept me thinking of all the possibilities long after the credits finished and was my second favourite film of the day. In fact the only drawback I felt was realism when Parker starts to become seriously ill most people would have left the job but he stays after getting offered some more money but no way near enough to pay his son’s health bill.

The first short NFSW was interesting as reminded me of Stead’s Maiden Tribute article which exposed how easy it was to be a child sex slave but the film also explored vigilantes and fame. There were several intriguing twists in story on movies for the main character and the use of children voices when the adults are talking online to catch paedophile is eerie. It was an amazing short film which has relevance for today’s culture and is even better when you consider there’s only two characters apart from extras.

The Burning I wouldn’t have went to see as I’m not overly fond of slasher films and I thought Grimmfest was just new films. But it was surprisingly good. It was dated (made in 1981) in its effects, music and with its amusing dialogue particularly camp leaders calling students bastards and all the references to wanking.  The introduction to villain was amusing with several doctors’ voices speaking in Cropsey’s head as he walks out the hospital still badly burned looking for revenge. The film was cliché in places with sex equals death, jump scares, false cares etc. But the idea of a school on an abandoned island being picked off is scary due to Breivik in Norway.

The Chamber was shot over 90% in a submarine but the scenes don’t seem visually repetitive because of great camera work with different angles, focuses and lighting all playing a part. The visuals and story focus on the claustrophobia of the submarine and the political emphasis makes it even scarier as even if they do surface they don’t know what will happen. Lastly on this film I stayed behind for the Q and A and hearing about the logistics of filming including needing to build a tank with removal panels made me appreciate the film even more.

The final short of the day Dearly Beloved had some nice lighting with different shades of red when one of the guys kills someone with a brick. But the story was thin, the characters undeveloped. You don’t know why they killed someone till end and because of the writing I didn’t feel engaged enough to care. By far my least favourite film of the day.

Pet was a weird film with its many changes in personalities of the two main character and M Night Shyamalan style twist. Visually it was gritty and the basement location was very claustrophobic. I don’t have strong feelings towards this film perhaps because of a lack of horror or the description saying the girl isn’t all she seems making me think she would be a monster when she wasn’t. Although the fact it wasn’t a rape film was positive.

Burning Trash was the funniest film of the festival with plenty of one liners, dead pan and dark humour. There’s a brilliant hook with Owen talking about his parents being dead in a fire and then realising his psychiatrist has fallen asleep setting the tone for this film horror and comedy. Owen even though an arse hole reminded me of Reynolds’ Deadpool so much even his girlfriend remind me of Vanessa in the same film that I rooted for them. There was quite a lot of odd sex references some horrifying like Owen’s Nan’s religious fetish others like his burned sister being a lesbian I felt should have been explored more. This film was definitely my favourite as I related to the characters more and as it was the only horror comedy of the day it stood out more.

Overall it was a good day I saw several films I wouldn’t have watched with only one short I didn’t enjoy. There’s some films on different days I’ll watch when released so I’ll definitely go next year and maybe even try Supernova Sci-Fi festival even though I’ve only watch about 20 Sci -Fi films 7 of which are Star Wars.