‘Halloween’ 2018 An Intense Re-imagining of the Original 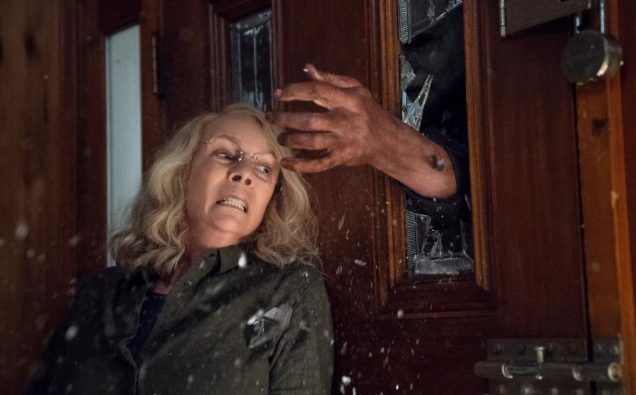 The newest addition to the Halloween franchise is a wonderfully intense and well-crafted thriller. Filled with all the slasher gore we would expect from a Halloween film- the music and relentless action takes us back to what the core of the original film brought us; pure horror joy!

I will always have a soft spot in my heart for the original Halloween film from 1978. Halloween was one of the first horror films I saw on the big screen and I had to go back, take everyone I knew, and watch it a few more times before it left the theater- I loved it that much!  I can’t hear the iconic music without getting a smile on my face!

When I saw the sequels over the years, I would enjoy them to a certain point, but always be disappointed. Something about the story wouldn’t feel quite right or seem too contrived. 40 years of re-boots never once lived up to the 1978 John Carpenter masterpiece of horror. There was just something special about that first Halloween film. 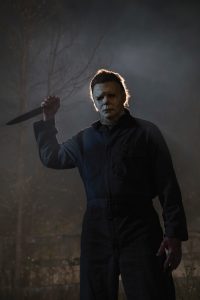 John Carpenter himself says it all, in his description of why audiences continue to be terrified by this embodiment of fear. “Michael Myers, with his mask and his gas station attendant’s uniform, is a character who is between a human being and the supernatural. He is the ultimate force of evil. He is ruthless, and there’s no reasoning or praying to God to save you. He has a single purpose, and that’s to kill you. Michael Myers is a relentless force of nature. He’s just coming, and you’ve got to get out of his way!”

Michael is back and has captured my black heart once again.

So, what is this new film about? Forty years after the events of 1978’s Halloween, Laurie Strode (Jamie Lee Curtis) now lives in a heavily guarded home on the edge of Haddonfield, where she’s spent decades preparing for Michael’s potential return. After being locked up in an institution, Myers manages to escape when a bus transfer goes terribly wrong, leading to chaos in the same town he preyed on decades earlier. Laurie now faces a terrifying showdown when the deranged killer returns for her and her family – but this time, she’s ready for him.

Laurie Strode, our original teenage final girl, grows up traumatized and broken. Always looking over her shoulder, she lives like she is preparing for the end of the world. (Her well-equipped safe room, is awesome, by the way) Michael is locked up in an asylum, but Laurie is haunted and oddly excited by the idea that one day he will escape, and she will be ready to kill him. Unfortunately, living your life like that doesn’t make you a very normal PTA kind of mom, and her equally traumatized (but very well trained) daughter Karen is eventually taken away from her. Karen, played terrifically by Judy Greer, has a teenage daughter now too. Allyson (Andi Matichak) wants desperately to fix the differences between her mom and grandmother. 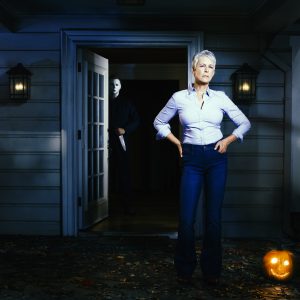 I don’t want to tell you too much about the story, but I love the way that it asks us to be aware how a character like Michael destroys people’s lives. Leaving behind a huge body count, but also leaving survivors to fear for their safety every day; they suffer every moment they are alive afterwards. Being a final girl isn’t an easy life to live. If you were Laurie, how could you possible go on and have a normal life after all the carnage and fear?

For fans of the original, there is quite an homage to everything we loved. Michael is just as unfeeling and relentless as ever. Creative kills abound and John Carpenter’s score is incredible as always. There is a humor to the story, that keeps it kind of light, yet the tension is always there and of course, Michael always crashes the party and brutally slaughters a few people. Speaking of that, the special effects were fantastic. I also loved how director David Gordon Green, had us looking in the window at some of the kills, making us more of a witness on the street. When Laurie looks up at Michael and they make eye contact for the first time, I got chills. There were quite a few scenes in the film, where I admit, I yelled out loud in excitement.

The three generations of women from the Strode family working together is just icing on the cake! Jamie Lee Curtis is spectacular. With her wild hair and serious demeanor, she is quite fearless at times, and then we see that she is still very vulnerable. It is obvious Michael has defined her entire existence. And Judy Greer, well, she gets one of the most iconic scenes in the film!

You don’t have to have seen the original film to enjoy this one, but I think they work perfectly together. It is left open ended, as always, but this time, I wish it to be the last film. If it’s not broke, don’t fix it. The advice that director David Gordon Green got from John Carpenter at the beginning of the project: “Keep it simple and make it relentless.” was obviously taken to heart. The new Halloween is, for me, the only real sequel. He has delivered exactly what this Halloween fan wanted.

Halloween 2018 is available on 4K Ultra HD, Blu-rayTM, DVD and On Demand on January 15, 2019 from UNIVERSAL PICTURES HOME ENTERTAINMENT