‘Halloween Haunts’- The New CD for Halloween Lovers of All Ages

Songs to Die For 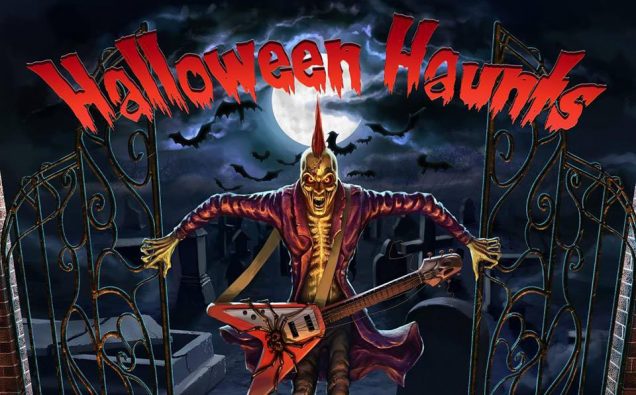 The “Halloween Haunts” CD was brought to my attention at this year’s Scare LA Halloween Convention. I have to agree with creator Albert Martino’s sentiments that we need some new Halloween songs. Now don’t get me wrong, I love my favorite Halloween songs to death; can we ever get enough of “The Cockroach that Ate Cincinatti”, “Monster Mash” or “Dead Puppies”?  I grew up listening to the great Dr. Demento so I know all the songs, even the obscure ones, and as a DJ in my younger years, (yes they had music back then) I can program a pretty crazy Halloween party. But… the same songs do get old and there is always room for more Halloween anything! “Halloween Haunts: Revisited” (the name you look for when ordering) brings us songs from all different genres of music: Rock, Hip-Hop, Blues, Techno, and Heavy Metal, so there are lots of new sounds to pick from. I think they did a great job putting this eclectic grouping of songs together. There are songs that remind me of Oingo Boingo and many other artists. My personal favorites are “Skeleton Bones” and “Halloween Scream”. Albert is very passionate about his CD and shared with me how it came about.

Los Angeles Zombie Girl: So Albert, what made you put together a CD specifically about Halloween?

Albert Martino: “I am the Halloween fanatic in my family. I decorate my house inside and out and I’ve thrown several Halloween parties over the years. I thought we needed some new Halloween songs, I know I did, so I took it upon myself to write these songs, each with their own simple melody. Since my musical background is one year in my high school choir and a semester of music appreciation in college, I knew I needed some great musicians to help me. So I contacted Capricorn Studios, the #1 Studio in San Diego. One of their producers, Lauren Scheff, (younger brother to Jason Scheff, the lead singer for Chicago) was instrumental in helping me accomplish this. Wanting a song for everyone’s musical tastes at a party, I’d tell Lauren what genre to use for each song and his musical magic brought these songs to life. The end result is “Halloween Haunts.”

ZG: You have a lot of different musicians that contributed to the CD. Can you tell me about them?

AM: “Lauren Scheff plays bass guitar in an Indie rock group called ‘Get Back Loretta’. He produced and arranged the music for the following songs; ‘3 Evil Ghouls’, ‘Don’t Play with Goblins’, ‘Pumpkins Everywhere’, ‘Halloween Clock’ and ‘House at the End of the Street’. Two other members of his band also helped us. Lead singer Stephan Bradford sang vocals on ‘3 Evil Ghouls’ and ‘Skeleton Bones’ and their keyboard player, Kevin Martin, was vocalist and provided music for ‘Halloween Clock‘ and ‘Don’t Play with Goblins’. Another person responsible for this CD was a young musician, Ryan Erwin, from another Indie Rock group called “Small City Calling“. He produced and arranged the music to ‘Halloween Ghosts’, ‘Witches Brew’, ‘Halloween Scream’ and ‘Halloween Fright’. He enlisted some of his musician friends to help out including Jamie Vernon, a young Hip-Hop singer from the Bay area who I collaborated with to write the song ‘Halloween Scream’. He wrote the main lyrics and I added the chorus. Jamie is also the vocalist for that song. The vocalist for ‘Witches Brew’ is a young singer out of LA named Rachael Feinman. The music to ‘Skeleton Bones’ was produced by the owner of Capricorn Studios, Bryan Stratman, who was also essential in mastering the final CD.”

ZG: So how can people get Halloween Haunts: Revisited?