Harvest Lake, the second release from Bandit Motion Pictures, is now available on Vimeo On Demand ahead of its intended premiere date.  Sounds like great news, right?  Well, yes... 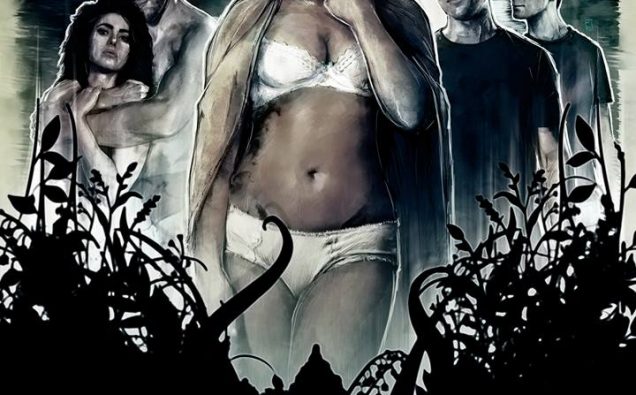 Harvest Lake, the second release from Bandit Motion Pictures, is now available on Vimeo On Demand ahead of its intended premiere date.  Sounds like great news, right?  Well, yes in one aspect, because now all of us movie lovers who abstain from illegally downloading films from the web, can enjoy Harvest Lake legitimately.  The unscrupulous downloading of some, prompted the Bandit team, Director and Writer Scott Schirmer ( Found )  and Brian K. Williams ( Found ), to wisely make their film available immediately.  To show support for Indie filmmaking, the cast and crew of Harvest Lake, and my own attempt to quell the nasty effects of swiping unsanctioned cinema, I rented it on VOD this weekend.

I really enjoyed the heavily acclaimed horror film ‘Found‘ and the subsequent release of ‘Headless”.  Furthermore, what Schirmer said in his statement on foundmovie.net really struck me.  I read this particular statement after already falling in love with the movie and I was very happy to see, Schirmer perceived the novel as I did the film.  I was equally intrigued with the slasher flick Marty, the young brother in ‘Found‘ watches during his story unfolds.  This ultimately leading up to the feature, ‘Headless‘ which was headed by Arthur Cullipher who also lays claim to Clockwerk Creature Company.  ‘Headless‘ starred Shane Beasley as the title subject, in a unflinching look into the psyche of a deranged killer.  Harvest Lake, as the credits listed, named quite of few individuals responsible for my beloved ‘Found‘ and ‘Headless’ so I was eager to check this out.

As I settled in on my favorite spot on the couch, hot cup of Irish coffee in hand, a smoking hot tattooed Blonde appears on screen, clad only in a complimenting white bikini.  She’s very seductive, as she looks back to a bearded young man.  A playful chase begins, through a scenic beauty commanded by lust.  The surreal opening scene, accompanied by an atmospheric soundscape, has gained my interest. 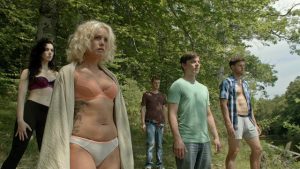 We soon meet the group of friends who plan on spending the weekend at the lake, enjoying the outdoorsy wonderment with the aid of illicit substances, alcohol, you know….becoming one with nature.  Just how “one” they become is the basis for our horror.  Arthur Culliphers Clockwerk Creature Company creates an entity reminiscent to something out of 1983’s fantasy flick, ‘Krull’.  This is not an insult by any means, if someone perceived it as such.  I fucking love ‘Krull’, and that is simply what I took away from the creepy, tentacled, multiple sexual organ having creature they constructed.  Yes, you read that right.  Schirmer displays a haunting vision of an alien organism aimed to dominate through one of man’s primal instincts; procreation, in some of the most base forms.  It’s slightly shocking, certain elements of Harvest Lake echoing the likes of Lynch and Cronenberg.  I like weird and wonderful so I definitely dug this second effort from Scott Schirmer and team.  To back up this unusual storyline is the talent of Indie genre darlings Tristan Risk ( Frankenstein Created Bikers, American Mary ) and Ellie Church ( Found ) along with the likable and funny Jason Crowe, Dan Nye, and Kevin Roach.

Not wanting to take a damn thing away from Harvest Lake, the tale of the telepathic Alien Sex Fiend, this is one to behold yourself, and not to embrace lightly.  I watched it twice, back to back, not certain if I just saw what I did.  I did, and I liked.  It was refreshingly different and unsettling, something I look for in films, and I can’t wait to see more from everyone involved in this production.