They claim to be North America's largest haunted attraction. Does quality match quantity? 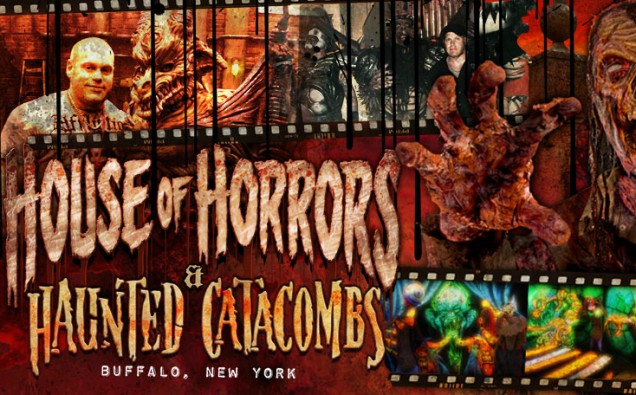 House of Horrors & Haunted Catacombs is another haunted attraction in the Buffalo, NY area. It boasts that it is the largest in all of North America and, frankly, I believe it. With 6 attractions, there is a lot to do here. Let’s go down the list, shall we?

Now, there are 6 attractions total, but only 5 main ones. The 6th, Zombie Apocalypse Shooting Gallery, is an extra, optional attraction you can go to for an extra $3 on top of the normal ticket price. The 5 main ones include The Infected, Hellhouse, Where Evil Dwells, Mark of the Beast, and Killer Theater.

Hellhouse is designed as a truly messed up haunted mansion. Twists, turns, amazing animatronics, varied actors, it was truly impressive. There are so many effects at play here that it truly astounds. Combined with a good length and you have just a great experience.

This, as I understand it, is one of their older attractions. Very well made. Top notch. 4/5.

Mark of the Beast:

Mark of the Beast is a house with a satanic theme. It’s styled as a church that has been corrupted. Blood, sacrifices, cultists, I loved it! The same quality carries over from the last house. You can really tell a lot of time, money, and care went into this. Really couldn’t ask much more of this house. Good length too.

Styled after a government facility in the midst of an alien virus outbreak, this original concept sounds good in theory, but did not pan out at all. Subpar animatronics share the attraction space with a confusing presence of really shoddy mannequins. Why use mannequins in such great numbers? If you have enough actors, use them, if not, just go without. It completely took away from the immersion. That combined with the confounding brevity of the attraction led to the first true disappointment of the night.

It’s a new attraction and it has a long way to go to get up to par with the first two. 2/5.

Killer Theater is themed after movie killers. It had a very interesting approach in that even the line was somewhat interesting as you wait in a claustrophobic underground tunnel. Once inside, you are treated to themed areas from movies such as Saw, Halloween, Friday the 13th, and more complete with actors in costume as your favorite killers. My favorite? Freddy’s boiler room. They pulled off a truly inspired illusion to make it seem like Freddy really was everywhere at once! I won’t spoil it, but it truly impressed.

If you love horror movies (and c’mon, of course you do, you’re reading this), this will probably be your favorite house! 5/5

I find it interesting that both of the two largest haunted house attractions in Buffalo introduced an interactive flashlight attraction the same year… Who ripped off who, I have no way of knowing, but it happened, clearly.

In any case, an interactive flashlight attraction is a house where you are given a flashlight before you enter and it is operated remotely meaning that the attraction staff can turn it on or off as they choose. This can lead to you being in utter darkness for periods or have the lights come on just in time for a jump scare. The house itself was well put together with a very creepy atmosphere. However… far too short. Really hurt its score when combined with the fact that the flashlight could have been used to much better effect here. I felt like it was turned off 70% of the time.

Make it longer and get a new flashlight operator. Needs improvement, but you’ve got something here. 3/5

Now for that bonus house…

Advertised as allowing you to actually shoot at zombies, what horror fan could resist this? $3 extra on the ticket price? Pffft, bring it. One hour long line? Annoying as hell, but I didn’t have anywhere to be, so why not? No, neither of these things would have been a problem… if the attraction was any good…

After paying the extra $3, after waiting in line for an hour, I was let into the attraction, given the cheapest paintball gun I have ever laid eyes on, and told I had 12 shots to shoot through a window as a meandering, unthreatening zombie (who, btw, I was only allowed to shoot in the torso). The gun felt like it was going to break in my hand and I might as well have been shooting at a cardboard cutout.

And check out their site for deets! http://www.houseofhorrorsbuffalo.com/

Stay tuned for next weekend when I check out District of the Dead!