“Headless” is exactly as messed up as you’d think 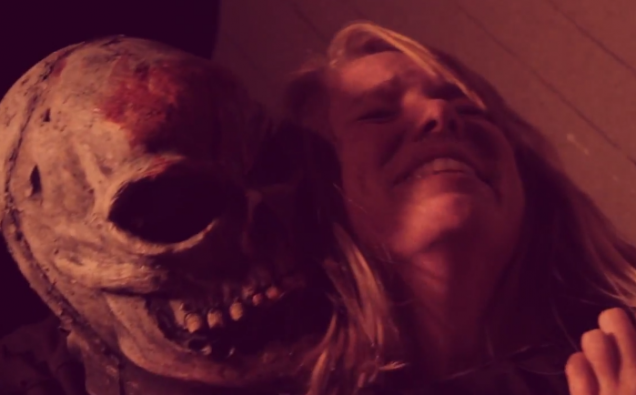 “Found” was a indie horror movie that took fans of the genre by storm. It was about a young boy who finds out that his older brother is a serial killer. The older brother’s inspiration? A lost slasher film titled “Headless”. Well, Forbidden Films have given the people what they want. They have made “Headless” a real movie… and it is delightfully fucked up.

Usually I talk about the plot of the film a bit, but the little semblance of one is really just a frame upon which to hang the multiple, grisly murders, beheadings, devouring of eyeballs, and sooo much skull-fucking. Did I mention the film was fucked up? We do get a bit of backstory on the killer in a series of flashbacks. These are the closest thing to a true narrative in the film and they are very well done.

The acting is superb in this film. The killer is played by Shane Beasley and when he has the mask on he is just damn menacing. I love the design of the mask, how easily you can see the eyes and how the mouth can open. It really allos Shane to emote well with it on, which he utilizes to great effect. Just looking at his eyes, you can see the desperate madness. I also enjoyed the character “Skull Kid”. This child wearing a white skull mask is a hallucination of the killer and tells him what to do. “Skull Kid” is just delightfully creepy.

Effects… Oh, boy, where to start? Well, everything is practical, no cgi here. And one can only wonder how many gallons of stage blood were used in this film. Excellent prosthetic work throughout. Between the heads being cut off and eyes being scooped out, there is certainly some high quality work at play here.

Bottomline, they movie is twisted. And I loved it. If you enjoyed “Found”, definitely be sure to check out “Headless”!