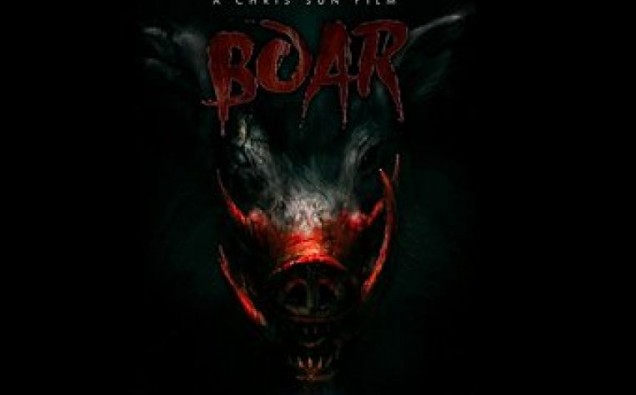 Theblood-shed.com has been a strong supporter of indie horror and we have spoken out against internet piracy on several occasions. When I heard about the situation with upcoming Chris Sun (Charlie’s Farm) directed creature feature Boar, I knew I had to do something. What is the situation? Taken from the FB event page “Keep Boar Alive- Help Save Our Film!”…

On Monday 3rd August, the investor’s behind BOAR called a meeting with the producer Kris and I, to express how deeply troubled they were by the pirating issues affecting my last film Charlie’s Farm. They were concerned that the same fate would befall BOAR because of the increase in online theft of films, and decided that they could not invest any more funds into our Aussie Creature Feature.

With only 4 DAYS before we being shooting the film this has put us in a serious predicament. The investors understand and have the utmost respect for the amazing cast and crew attached, which is evident from the $700K they have already put into the film to get us to this point. However, with limited respect being given to Independent and Hollywood Filmmakers alike, piracy fears have left us stranded and we need your help.

We are due to start filming on Monday August 10th and we are ready!
– Cast and Crew are all locked in and eager to start
– Props, generators, vehicles have been secured
– All of the locations have been sourced and confirmed
– Art department are in the process of building a make shift shed for massive fight sequence starring Australia’s own Nathan Jones (Mad Max: Fury Road)
– Wardrobe has travelled across Australia, sizing up all the talent and even getting sponsorship deals to make out amazing cast look awesome
– And the monster pig has just had his custom trailer built to travel him around locations and is due to arrive on set this Friday

To date, the investors have spent approximately $700K AUD from the $2.74M AUD Budget, leaving a gap of $2.04M.
This is where you come into it folks! Forget Indiegogo! Forget Kickstarter!
I am asking you to SHARE the absolute shit out of this page and get as many Horror-Loving, Creature Feature Fans as you can donating. This task is NOT a small ask, as we literally need to raise 2 Million Dollars over the next 5 weeks, with $225K needed by this Friday (7/08/2015) or the producers have no option but to CANCEL our film.

I honestly need your help to KEEP BOAR ALIVE.

What we need from the immediate $225K:
– To get some funds over to the US to ensure one of the lead actors can board the plane on Friday with no stress.
– To get into Lemac and collect the camera gear needed, so my DOP and his team can start testing.
– To pay the dedicated crew of people their weekly wages, as they continue to bring BOAR to life with me.

This is NOT an impossible task. We are going to need thousands upon thousands of Aussies and Film Lovers from ACROSS THE GLOBE on this page, sharing this page and donating to the film. But the only way this can happen is if you share and donate first.

So YES Australian Horror Director Chris Sun is finally begging for help. Please don’t let BOAR fall between the cracks, or die before it has even had a chance. Please stand beside me as we stand against the fear of piracy and help me get this crazy ass pig on the TV screen for you in 2016!

Our target is $2 Million and it all starts with you.

So many people think that internet piracy is a victimless crime. These people are wrong. Piracy is destroying the film industry, especially indie films. No one can afford to do anything risky aka creative anymore because if it’s not guaranteed to make enormous profits it might not be able to compensate for all the assholes who steal it. I say fuck that. Help indie horror. Help Boar. Do what you can, go to the event, accept it, invite your friends, contribute if you can, spread the word. These guys have 2 days to raise $225k or the movie is canceled. That’s daunting. But does it mean don’t try? No, it means do everything in your power to help. You. Reading this right now. Please help.

Go to the Facebook event here and help save indie horror: