His Name Was Jason: A Look Back At Friday The 13th

How Does the Original Friday Hold Up Today 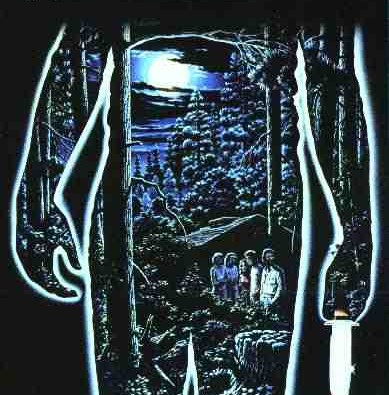 Hey guys, welcome to the first installment of a new series I’m starting on the history of Friday the 13th. Im titling these articles based on a famous quote from each film; I deem this first one “His Name Was Jason”, because I’m an unoriginal f##k. Leading up to the 13th(!) film, set as of now to come out May 2016, I’ll be reviewing the entire Friday the 13th franchise. Movies, Video games, Books; whatever I can get my bloodstained hands on. For the first entry though, lets start back at the beginning. This is 1980’s original “Friday The 13th.”

No one had a clue what Friday the 13th was going to become. Starting off as an little indie film titled A Long Night at Camp Blood, it eventually went on to make over 30 million dollars at the box office, a damn good profit considering its $550,000 budget. But while Friday introduced some of the elements that would go on to make later sequels so special (sex crazed teens getting the ax, bad jump scares, the chchchc ahahahah sound), there’s a lot missing, primarily Jason Vorhee’s. Here the largely unseen killer is Pamela, Jason’s big bad momma. Without the Hockey mask clad killer, the original film is more of a straight forward slasher. But does it hold up?

To be fair, these problems were far exclusive; the majority of 80’s slashers had the same, if not worse issues going on. And the original Friday delivers where it counts; the kills. The gore is gruesomely enjoyable, riding a fine line between realistic and over the top. Kevin Bacon’s death (via throat arrow) remains one of the series best, simple but extremely satisfying. For a middle aged mom with a muffin top, Pamela Voorhees can murder with the best of them.

Pam as a whole is just an awesome villain. Although her identity isn’t revealed until the last act of the film, the small time Jasons mama gets on screen makes an impact. While there were a few exceptions (Alice, Sweet Alice comes to mind), the majority of slasher movies coming out at the time had big, burly beasts doing the killing. Mute lunks like Leatherface and Micheal Myers dominated the horror scene. Pamela was a breath of fresh air.

The teens are all pretty standard with Alice portraying a fairly passable final girl. But out of the surporting cast, Crazy Ralph is far and away the most fun. As his name suggests, Ralph aint the most mentally stable of individuals. 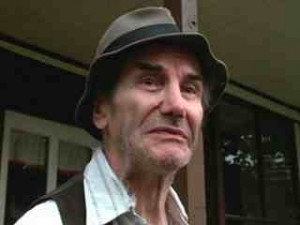 Riding around on his bike and preaching of bloodcurses and doom, he’s a great and highlarious red herring. It’s a shame he only stuck around for one more sequel; Ralph had the potential to become a series classic.

In fact, if there is one thing that really hurts this film, its  the lack of iconic imagery that would later shape the franchise. There’s no hockey mask, barley any machete, and a disappointingly small amount of boobies. Without them, Friday has to stand out on its own merits, and at the end if the day its just average, not an instant classic like Halloween or A Nightmare on Elm Street ;it might be one if the only horror franchises that began to improve as it went on.

So while the greatness of later films is not entirely present in the original Friday, the seeds were planted and have begun to sprout. It won’t until part 2 where the series really begins to pick up, with the introduction of one of cienmas all time greatest anitheroes: Jason Vorhees. Stay tuned to the Blood-Shed and for the next installment of our coverage on Friday the 13th. Until then, stay blood thirsty horror fans. Peace out.