Supporters hope for the best while facing unknown future. 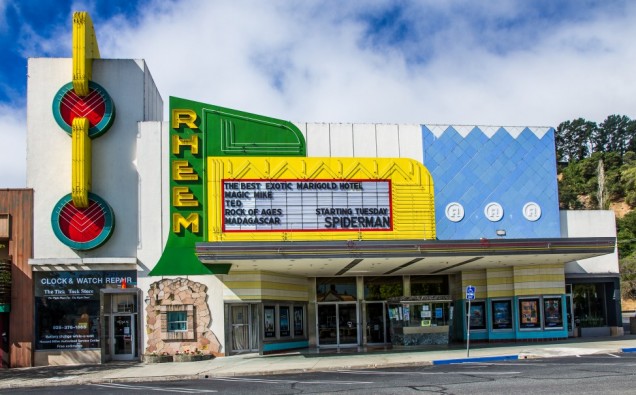 On May 25, 2015, The New Rheem Theater in Moraga, CA was voted “The Best Indie Cinema in the San Francisco Bay Area” by the Lamorinda Weekly. Just 8 days later, the Contra Costa Times reported that the Rheem would most likely be closing its doors forever on June 30th.

The sudden need to shutdown stems from an unexpected 60% rent increase that the proprietors of The Rheem simply can’t afford. Theater operator Derek Zemark (who has run the establishment for the last 5 years) said he only learned about the hike on May 30th; notice of the rent increase was announced on The Rheem’s iconic art-deco marquee, alongside a brief announcement that the theater is being forced to close. 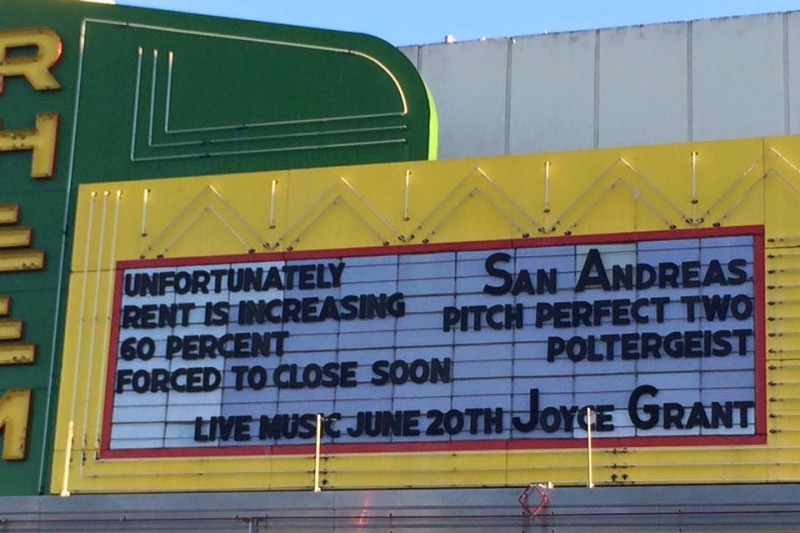 What makes this closure especially disappointing to Blood Shed readers is that the Rheem has been a champion of classic horror films, hosting bi-monthly events and mini weekend festivals. Even though theaters in general appear to be a dying breed, losing such a unique and historic establishment packs a powerful sting.

The theater was built in 1957 by developer Donald Rheem as a single-screen movie house; like other “grand old movie houses” across the country, the theater has had its ups and downs, even closing for a stint in the 1970’s before being converted into a multiplex in the 1990’s. But even with this modernization the theater remains a very unique and historic establishment.

You see, The Rheem is no ordinary movie theater. In addition to first-run, classic, and independent films, they host live music, poetry readings, and film festivals. And there’s another feature that really makes The Rheem a standout; in May of 2014, the theater established The Classic Film Hall of Fame to honor pioneers of the industry. This museum-quality exhibit is filled with historic photos, relics, and memorabilia. 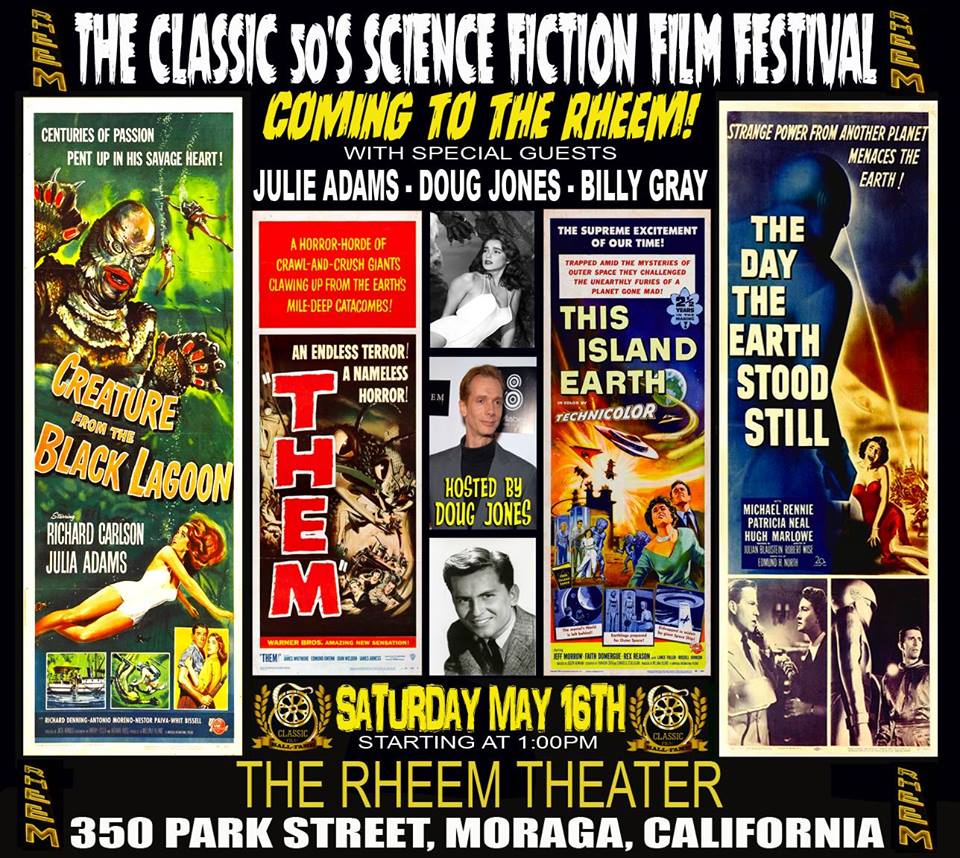 The Rheem recently hosted The Classic ‘50s Science Fiction Film Festival on May 16th where they screened Them!, This Island Earth, The Day the Earth Stood Still (with special guest Billy Gray), and The Creature from the Black Lagoon (with special guest Julie Adams). After the films, Julie Adams was inducted into The Classic Film Hall of Fame. The festival emcee was veteran creature-actor Doug Jones (Pan’s Labyrinth, Hellboy & Hellboy 2). Without The Rheem and events like these, the East Bay area of San Francisco will truly loose an amazing asset. 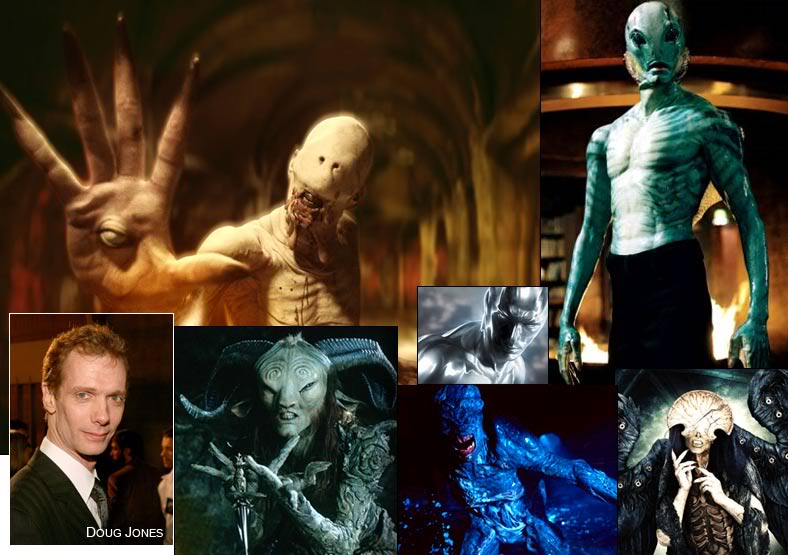 For the Horror Fans 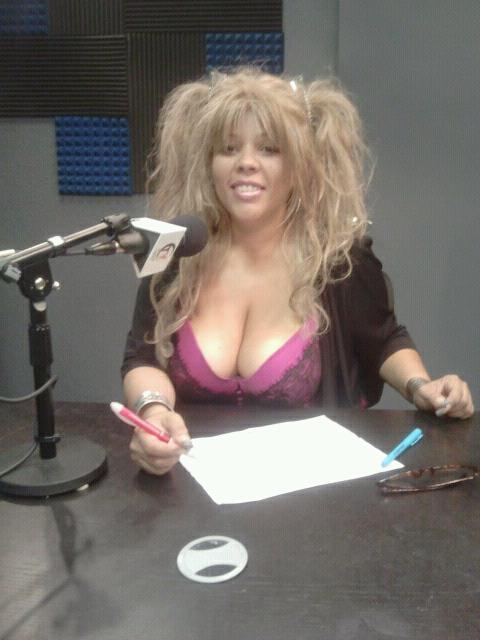 Local horror icon Vanessa, The Queen of Scream has been hosting regular slumber party-themed B-movie screenings at the Rheem for over 4 years now. She’s known Zemark for a decade, since getting involved with the California Independent Film Festival (which now takes place annually at The Rheem). They parlayed their shared appreciation of old-school horror and sci-fi into an event designed to get residents of this sleepy suburb out on Saturday nights, and The Queen of Scream was born! 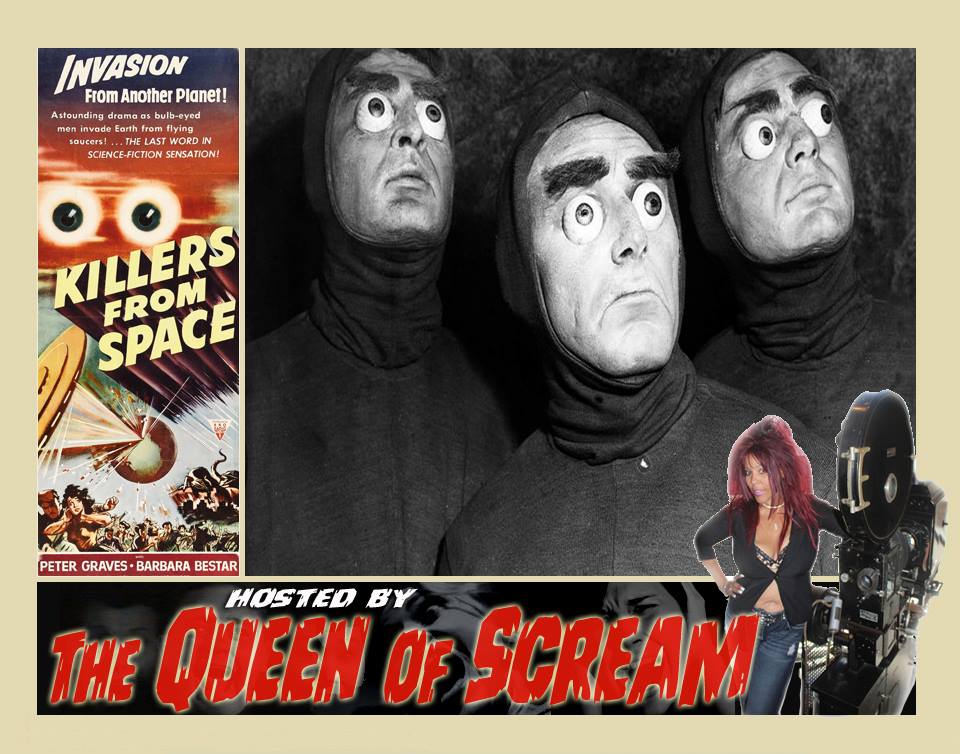 “What makes the Rheem so special,” she tells me, “is its history. Even the posters on the walls are all from 1957, the year the theater was first opened. They’ve retained the original light fixtures and restored the art-deco design as well. They host the California Indie Film Festival every year. And the Classic Film Hall of Fame is one of a kind.” Most importantly, “This place is run by people who love movies, and it really shows.”

If The Rheem does close at the end of summer, Vanessa is determined to keep The Scream of Queen alive. “As a woman and a minority, it’s especially important for me to maintain my presence in the horror community.” She’s created a Facebook page to promote her events and connect with fans; meet Vanessa online: HERE. 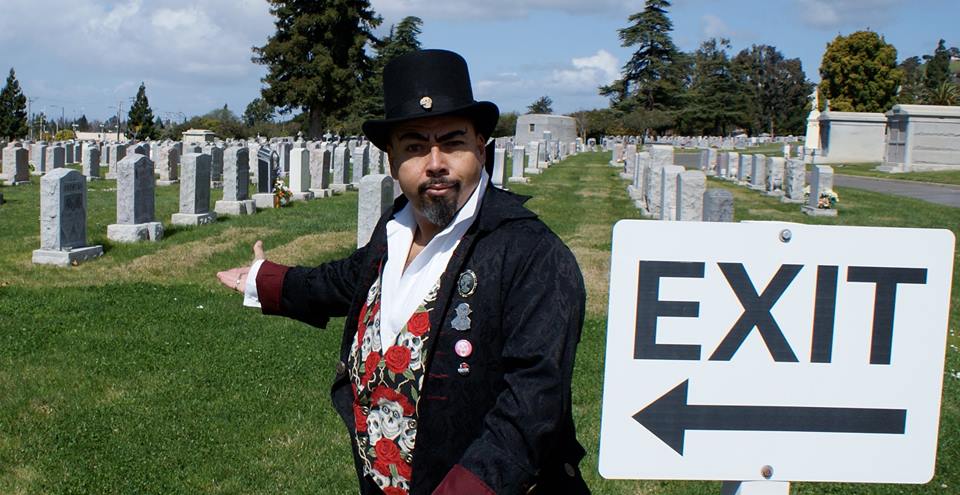 Frank Ailsworth, aka Lord Blood-Rah, host of the nationally televised Nerve Wrackin’ Auditorium, is another horror practitioner quite sad to see the Rheem facing closure. He was first turned on to the venue by film collector/archivist and Psychotronix Film Festival co-founder Bob Ekman (aka Sci-Fi Bob), and creature creator Eric Yee. After experiencing The Classic ‘50s Science Fiction Film Festival, he approach Derek Zemark about holding his own events at The Rheem.

On Saturday, June 27th, Lord Blood-Rah is hosting The Best of Bela Lugosi, “A tribute to the iconic Dark Prince of terror”, and will screen 1931’s Dracula and 1932’s White Zombie. Unfortunately, this horror host’s first show at The Rheem may be his last.

Of the Rheem Theater, Blood-Rah states: It’s “not just a great place to see a movie, the whole place is dedicated to the love of movies! The whole theater is adorned with props from classic films, from signed photos and relics to full size replicas of Herbie the Love Bug and the Delorean from Back to the Future. Upstairs are portraits of famous actors along with iPad-like interactive panels on the walls showing famous scenes along with biographical information.” 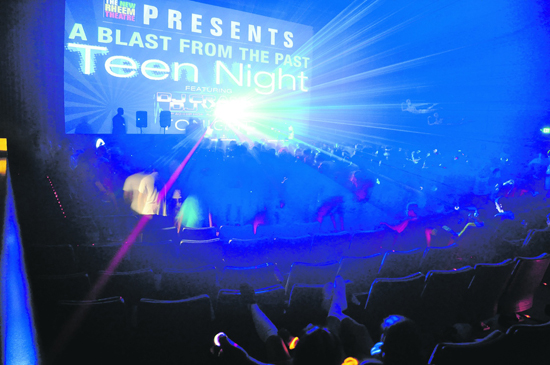 Lest you think that this is a case of a greedy landlord oppressing an independent business, Zemark acknowledges that property owner Mahesh Puri has been instrumental in The Rheem’s success over the past half-decade. “Four and a half years ago, [Puri] lowered our rent and never raised it, which helped the theater stay open and operate. He basically subsidized the rent for over 4 ½ years.” Unfortunately, Puri can no longer continue to help fun the theater.

Factors driving the rent hike include $30K worth of improvements to The Rheem stemming from an Americans with Disabilities Act lawsuit, upkeep expenses, and the rising costs of property taxes and insurance.

While many historic theaters are subsidized by their municipalities, specifics of Moraga’s charter make this impossible (regulations prevent using town funds for “gifts”)—plus the fact that the town’s coffers are more or less empty. Still, supporters rallied around a proposal to save the Rheem that was presented to the town council on June 10th.

Puri opposes changes to the current regulations governing historic structures and other landmarks, as they wouldn’t require property owners to consent to a historical designation; such a move could diminish property value, impact potential uses, and effect resale opportunities.

The meeting resulted in a compromise that gives supporters of The Rheem room for optimism. The City of Moraga will allow the theater to remain opened for another 60 days (through the summer) so they can pursue nonprofit status, a designation that may allow them to remain operational.

Since it will take 2 months to establish a foundation for The Rheem, a Go Fund Me* account has been set up to raise some quick cash to cover the rent increase through August. If you’d like to help out, you can visit their page: HERE.  You can also stay up to date on the situation by liking The Rheem’s Facebook page HERE, as well as the new Save the Rheem Theater Facebook page HERE.

*As of posting this article, The Rheem has already met its goal on Go Fund Me, proving that the community truly supports this establishment.

Celebrating the Past During Uncertain Future 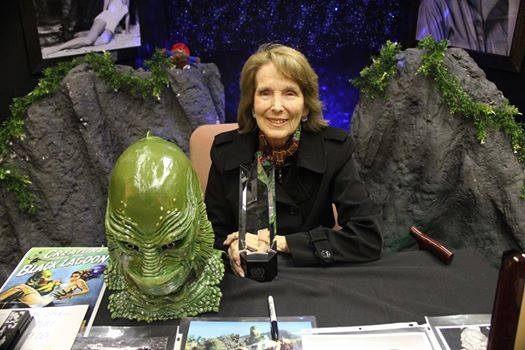 I asked Zemark to describe some of his best memories of The Rheem during his 5-year tenure as theater operator.

“One of my fondest memories of The Rheem was on May 12th, 2013, which was the first induction ceremony of the Classic Film Hall of Fame. Mickey Rooney (his last public appearance), Cloris Leachman, Sara Karloff (daughter of Boris Karloff), and Chris Costello (daughter of Lou Costello) were all in attendance.” 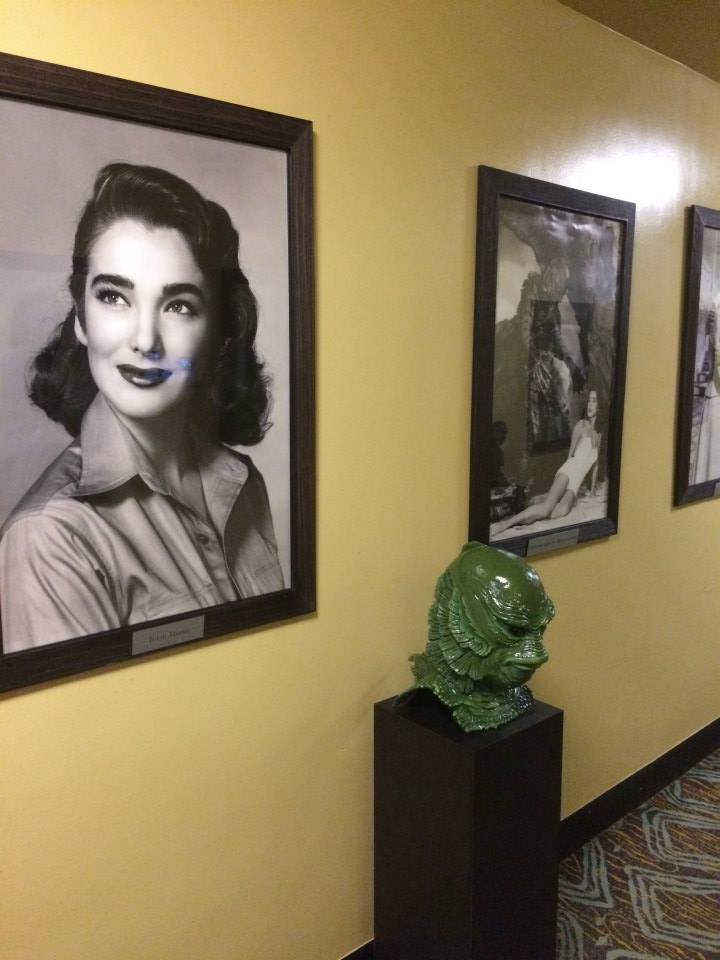 Reflections on the Rheem’s annual Oscar parties also elicit many fond memories for him.

Since hope exists, Zemark isn’t planning a “final event” or a “closing party”. Still, he encourages San Francisco Bay Area locals (and classic theater fans worldwide) to visit The Rheem while they still can—just to be on the safe side.

“I would invite people to visit The Rheem, not just to see a movie, but to enjoy over 100 Hollywood exhibits, everything from autographs, props, wardrobes, original movie posters—even a gigantic 8 foot Kung Fu Panda.” 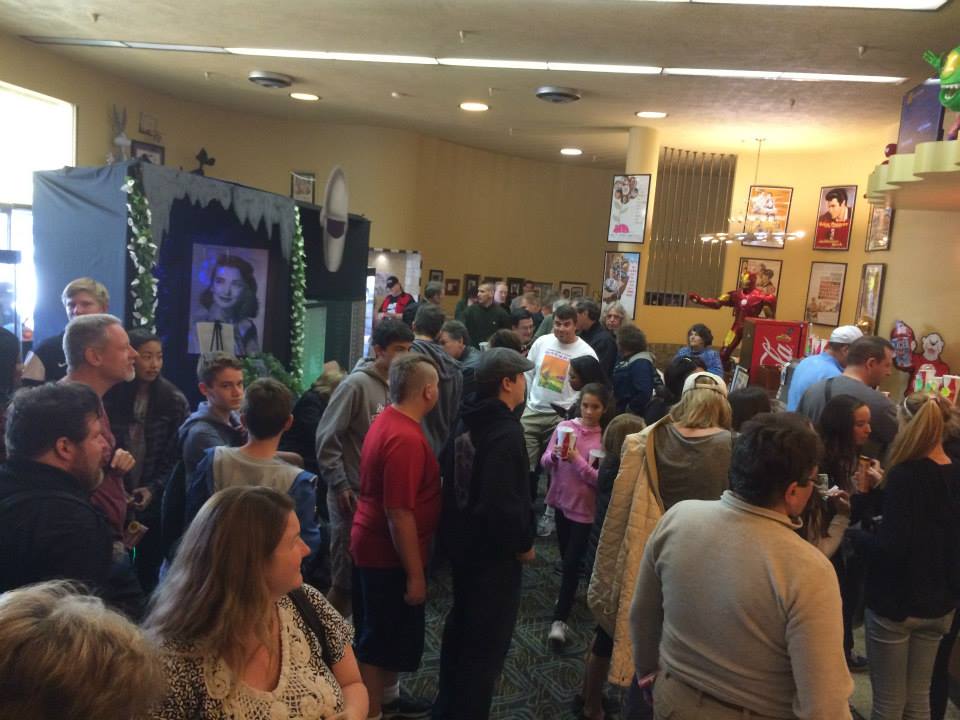 I took Zemark’s advice and visited The Rheem myself last night, where I played “Food or Sex” and other games with The Queen of Scream before seeing Plan 9 from Outer Space. On my way out, I immersed myself in the Classic Film Hall of Fame which is just as amazing as everyone says it is. Now I can say first hand that The Rheem really is an amazing place, an asset any community would be proud of. Losing this unique slice of history would be a travesty.

Whatever comes to pass at summer’s end, we’ll be to bring you an update regarding The Rheem’s future. We at The Blood Shed wish them nothing but the best!

Special Thanks to Derek Zemark, Vanessa, The Queen of Scream, Lord Blood-Rah, and the Moraga City Council for contributing to this article.

What do you think about The Rheem Theater and the possibility of its closure? Sound off in the Comments section!