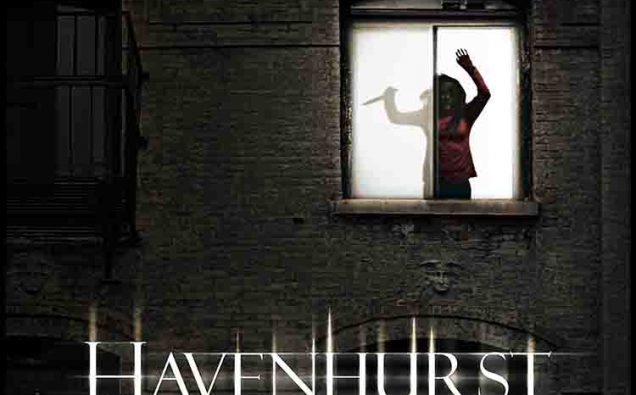 Welcome to Havenhurst, a gothic apartment complex in the heart of New York City. A beautifully maintained, turn-of-the-century building that houses over 3,000 residents and countless dark secrets. The rent is what you can afford and the rules are simple: live a decent life and you can stay forever. Break the rules and there are consequences. Horror thriller Havenhurst, is the kind of film that will make you think twice about staying in an old gothic hotel. I really enjoyed the movie and I personally loved entering into the eerie, evil house full of secrets. You can find my review by clicking here.

Director Andrew C. Erin and co-writer Daniel Farrands, bring us their version of the real-life serial killer H.H. Holmes, who was suspected to have killed over 200 people in the late 1800s with the new horror film, Havenhurst. His house of torture in Chicago was documented in the book “Devil in the White City”. I got a chance to have a conversation with Andrew C. Erin and find out a little more about who he is, his life in film-making and the movie Havenhurst.

Los Angeles Zombie Girl: Hi Andrew, Thanks for talking to me. Let’s just start at the beginning. How did you get started in film making?

Andrew C. Erin: “I always had a passion for movies and in my early twenties, I started writing, producing and directing short films up in Canada. One of my short films did really well and got me started. My first film was Sam’s Lake, based on a true story of a cottage that I used to go to. I eventually ended up in Los Angeles, and within a year I had the feature setup and we were shooting it on Vancouver Island. That film made it into the Tribeca Film Festival, and that is what kicked off my career. Since then I have been in LA doing a variety of different projects.”

LAZG: Is directing what you always wanted to do?

AE: “Not really. Growing up I never really thought it was a possibility. I would watch movies all the time, I had such a love for it.  I ended up in Toronto and was trying to find my way. I had some buddies in the film industry and we started to think we should go out and do some short films on the side and I realized that this is what I really wanted to be doing. So, I started putting more energy into it and then very luckily when I got started, it kept going and going. I was very lucky.”

LAZG: Tell me a little bit about Havenhurst.

AE: “Havenhurst is a concept that Dan Ferrands and I came up with many years ago, when we were put in a room by a producer who gave us the challenge to come up with a concept for a movie that would be interesting and franchise-able. That was the first time that we met and we really clicked. We started throwing ideas back and forth. Then we got around to talking about H.H. Holmes and came up with the concept of Havenhurst and we loved it. We conceptualized it as a feature. I was represented at Evolution which was at the time, Mark Burg’s management company and the Saw movies were in full swing. I took it in and pitched it to them as here’s the next franchise, and they at that time, with Lionsgate, were looking to get into television. They saw the potential in it as a series, and we redeveloped it into a series and Lionsgate took it into the room…right as the writers’ strike happened back in 2007! So, then it went on Hiatus for a year or so. When we got the rights back I refocused on it and got the financing together and it went to Twisted Pictures and they said, this is great, do you want to do it as a feature? So, it finally got made.”

LAZG: Was Havenhurst really a story about the problems of addiction?

AE: “Yeah, I am not a stranger to it I have a lot of people in my life that are plagued by it. We combined the struggle of addiction with H.H. Holmes in a way. Movies like Saw, for instance, are kind of morality tales. Havenhurst sort of approaches from that same angle, so that is why I think Twisted Pictures liked it so much. The people are hurting themselves, they’re hurting the people around them, which is often the case with addiction, but obviously, we take it to crazier extremes.”

LAZG: What kind of challenge did you have taking a true story like H.H. Holmes and making it into a story of your own?

AE: “Well I think, we didn’t want to tell his story, but we sort of figured out that what if, the house of horrors he had in Chicago wasn’t the only place? He travelled all over the place, they caught him in Texas, then he was up in Canada, and they think he was also in Europe. So, we thought, what if he was in New York for a time and there was a building that he got started. Then his offspring kind of continued the tradition. Once we got to that place it was really fun, because we were essentially doing what he did and we could enhance it a little bit. We had decades of history now and once we got to that place, it was pretty fun, just sort of coming up with the ideas. What it would be now, in the age where there is technology and things are all over the place. That helps with the twist in the movie and that helped them keep it a secret.”

AE: “Daniel is really awesome and I have known him now for seven or eight years. He is a great guy and a serious horror buff. This is a passion for him, but it is also his life. He lives it. He knew the Lutz’s; he personally knows all of the people when he produced Amityville: The Awakening & A Haunting In Connecticut, he is really connected to the horror world.”

LAZG: How did you end up having so many iconic horror actresses in Havenhurst?

AE: “Well we had an incredible casting director. Dan also wrote and produced A Haunting in Connecticut and we both have been making movies for years and years. So, when we were writing the script, we thought of Danielle Harris, (Annie in Halloween) who is an incredible actress, and Dan was like, “She would be great”. We needed to put someone in there like Danielle that people know so we approached her with it and she agreed to do it! We have gotten some slack for killing her off so early in the movie, because she has a lot of fans, you know. Dan, he was like “You know it would be great if we could kill her off in the beginning, and fans would be like what the…?” So, we did. With Julie Benz, (Saw, Dexter) we did an exhausting search to find the perfect person for Jackie and Julie just fit it perfectly. Our friend Mark Burg knew her well and she was in one of the Saw movies. I have been a big fan of hers, so when she responded to the script we were over the moon. Fionulla Flanagan was our third female find and I’m a big fan of hers too. Most horror fans know her from The Others. She’s just amazing and we got very lucky.” 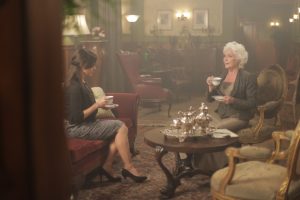 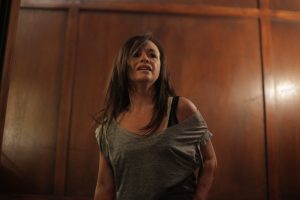 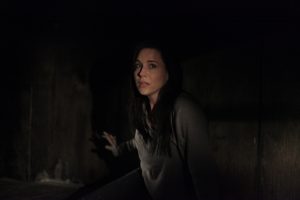 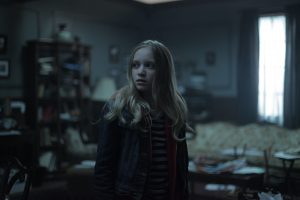 LAZG: How long was the shoot?

AE: “We shot in Los Angeles for 25 days. We used the old Herald Examiner building for the basement and stuff downtown. We were also in New York City for two days of shooting to get the exterior of the building and had Julie Benz walking around there for exterior shots.”

LAZG: Do you have any good behind the scenes stories?

AE: “Well I’ve been asked since it is a horror film if there was anything creepy that went on and it’s one of those shoots where we designed all of the locations in our heads. The answer is no. We built it all on a stage and we sort of set the tone every morning because we had this really creepy looking set that was very dimly lit all the time, mostly with practical lighting. We would use the fog every morning and we would smoke it out. So, when everyone arrived they were walking into this fog, in this very creepy dimly lit set, and we put everyone in the mood to stay focused and keep the scare factor going. It was a brand-new set in LA and there were no ghosts and no one did practical jokes. We were so busy trying to get what was on the page onto the screen that really didn’t have a lot of time for that. Sorry.”

Many of Andrew C. Erin’s writing and directing credits are horror films. Other films include Clara’s Deadly Secret, Borderline Murder, and Embrace of the Vampire. You can find out more about Havenhurst on their Facebook page.

All in all, Havenhurst is a really great horror film and I can’t wait to see it soon on the big screen. Showings will include week long theatrical runs in Los Angeles, San Francisco, Denver, Philadelphia, Atlanta, Houston, Kansas City and Phoenix. Nationwide, Havenhurst will be available on Cable VOD and Digital HD platforms, including Charter Spectrum, Comcast, DirecTV Cinema, Dish, iTunes, Amazon Instant Video, Google Play, Vudu and more.