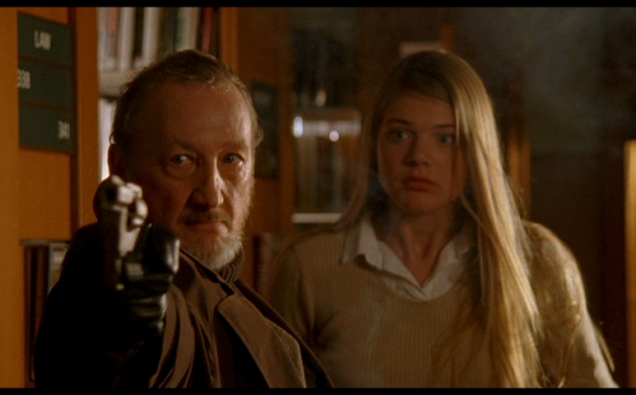 Disappointing fans of horror with no continuation to one of the most respected cult, comedy/horror films of the last ten years, Behind the Mask: The Rise of Leslie Vernon stands as one of the most original reinvisions. Smart, dark, funny and scary, Scott Glosserman created an entry into the dark corners of indie horror that had not been experienced since Wes Craven’s Scream. Headlined by a balanced cast including veterans Scott Wilson (The Walking Dead), Robert Englund (Nightmare on Elm Street), Zelda Rubinstein (Poltergist) plus young talent like Angela Goethals and Leslie Vernon himself Nathan Baesel, Glosserman found that perfect formula of pace, narrative, timing and costume to create a cult legend! Whether you like the slasher sub-genre or not, Behind the Mask is a true gem and stands tall nearly a decade later for the smart mockumentary style filmmaking that will hold you at the end of your seat and laugh even when you think you know what will happen next…

Studying the aspects of fear and what other people dread, Anthony DiBlasi (Last Shift & Cassadaga) and Clive Barker (Hellraiser & Nightbreed) created a tale of dark storytelling and discovery. Part of the 8 Films to Die For series, Dread brings together elements of madness, torment and drama surrounding a group of students who are working on a project surrounding what people dread most in their lives. Paced as well as the mysterious steps coming down the dark hall, Dread is a journey into madness which completely engulfed me with DiBlasi’s use of strong characters, powerful shock moments and the reality of what fear and dread are and can be manipulated to in one of the scariest monsters in horror film… the human being.

Horror comedy is a true art in filmmaking. Writing and directing it can be a very tricky balance. Take into account the aspect of bare bones indie filmmaking where every dollar, every effect and moment of film counts. Truly embodying the blood, sweat and fears of this craft, I was so happy and so pleasantly surprised by the summer camp massacre of I Didn’t Come Here to Die. Helmed by cinematographer Bradley Sullivan, I Didn’t Come Here to Die is just plain fun! Taking homage from a variety of horror sub-genres but never trying to be more than it should be, Sullivan blends the summer camp/slasher horror style with sex appeal, quality gore and comedic timing. Never knowing who is just behind that tree, who you can trust or the next victim right behind you, Sullivan, crew and the relatively unknown cast “kills it”, creating a film that is a guilty pleasure for horror fans of any age or liking.

The most established filmmaker on this list, Eduardo Sanchez soul and mind linger in terrible and haunting places. Known for The Blair Witch Project, Altered and V/H/S2, Sanchez masterfully merges technique, tension and powerful performances with indie dark psychological drama of The Lovely Molly. One part dark drama, one part horror film, Sanchez and writer Jamie Nash take the dark subject matter of abuse to a violating level. Highlighted by an award winning performance by unknown actress Gretchen Lodge who portrays Molly the terrifying shell waiting to consumed by an evil force so close to her. Heartbreaking, disturbing and one of the best indie films I have ever witnessed, The Lovely Molly holds very little back, taking found footage and shock cinema to an all too uncomfortable level.

The underlining thread to each one of these surprising films is the theme of demons and darkness (in one form or another) that manifests in each of the main characters and narratives. Whether it is focused on memories, abuse, fear, madness or belief, each writer and director crafts these themes into their works. Continuing to show great respect to horror fans, Matthew Arnold’s (Siberia) takes that concept to a different and realistic level. One part of belief, one part demons, one part fear, one part memories, Shadow People will surprise and haunt you but more important… it will scare the hell out of you! Highlighted by the truth in this phenomena known as Shadow People, Arnold feeds off the paranoia of the viewer with clever cinematography, paced storytelling, haunting score and a powerhouse performance by Dallas Roberts (The Walking Dead). Connecting so much with the idea of these entities and the struggle of personal demons with Roberts character Charlie Crowe, Shadow People knows how to manipulate, harness tension and entertain you. Even more important, it will make you believe.

HERE IS 26 MORE FILMS THAT SURPRISED ME: