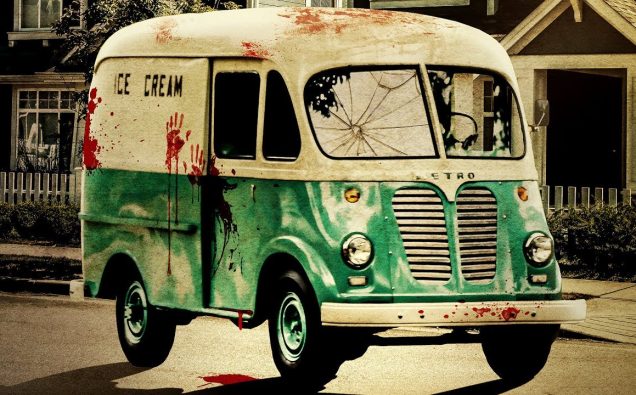 I know I’m not original- probably every reviewer said it and here I go too – “I scream, you scream, we all scream for the The Ice Cream Truck movie.” Whew, I just needed to say that! Let me also start by saying that when I was a kid, there was indeed an ice cream truck, jingling its catchy little tunes on my street every day. I ran after it and always got the same thing, an Orange 50/50 bar. My driver, however, was not as clean-cut, his long hair unkempt and we were all pretty sure he sold joints as well as frozen treats from the window of his truck. If there was any subject, perfectly set-up to be a horror movie, our Ice Cream Man was it. So, the film, The Ice Cream Truck, brought back childhood memories, and was a delicious treat for this horror fiend, on a hot August night. 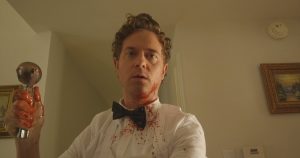 “Mary’s husband gets relocated for work which allows her to move back to her suburban hometown. As her family ties up loose ends back home, Mary moves into their new house all alone and….waits. Yet in this idealistic world, something seems very odd. The Ice Cream Man, a symbol of youth and good times, starts killing some of her neighbors. Mary soon learns that the suburbs are scarier in more ways that she ever remembered.”

The Ice Cream Truck is a decent enough retro style horror flick. Well, not completely retro, the cell phone use brought it squarely into the right now. If it wasn’t so bloody it could almost be called a dark comedy. That all being said, though, I truly enjoyed it. It had all the elements that a horror film needs to make it work. The Ice Cream Man (Emil Johnsen) was perfectly creepy, his voice gave me the chills. You couldn’t get away with anything in that neighborhood with him around- he has his own version of justice and morality! The movie was well done in the cinematography department, starting out making you feel nostalgic, (if a bit Stepford Wife like) and then taking you on a suspenseful ride into a terrifying suburban nightmare! It made me think of the 50’s and the 80’s combined. Taking a simpler time, mix with a crazier time and pouring in some old-school slasher action! Writer, director, and producer Megan Freels Johnston has a great summer hit on her hands! 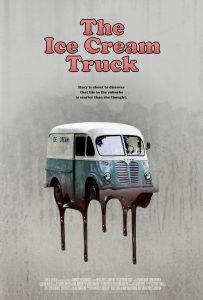 I admit there were a lot of parts where I questioned the choices our protagonist Mary (Deanna Russo) makes, to the point that towards the end, I began wondering if any adult could be that bad at making decisions and could this possibly all be a dream? I assume her town wasn’t as creepy when she left the first time, because I can’t imagine returning to a place that 5 minutes after she arrives, has a creepy guy driving around murdering people, in addition to a horny moving truck guy (Jeff Daniel Phillips), and a stud muffin teen next door (John Redlinger), sniffing at her heels.

Even though it seems like a teen horror flick at first bite, the reminders of life responsibilities, nosy neighbors, growing up, mid-life crises and the pressures of being an adult, give us enough that over 18 young-adults and even oldies like me can relate.

The final scene where Mary takes charge of everything- was off the hook! That was definitely the cherry on the top of my ice cream sundae! I cannot spoil it- you have to watch The Ice Cream Truck for yourself!

The Ice Cream Truck is available today on all Video On Demand sites. iTunes, Amazon, Googleplay, Vudu, Xbox and more… Get a scoop of fun summer horror for yourself, now!