Seriously, just don't do it 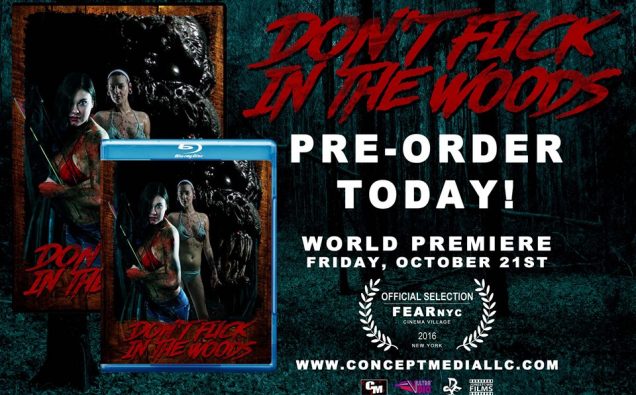 Film making does not always go as planned. In fact, usually Murphy’s law prevails. Don’t Fuck in the Woods is a good example of this. A long awaited creature feature, this film has had several false starts that ended up not working out. Most recently, production of the film halted last year after an actress was stung by numerous hornets and had to be rushed to the hospital.

But writer/director Shawn Burkett of Concept Media persevered and this latest attempt to get the film made has been a success! In fact, filming is almost done and pre-orders are now live ahead of an expected October release! I myself had the opportunity to jump on board and help with one last speedbump and now the film is an official TheBlood-Shed production!

The film tells the story of a group of friends who go camping in the woods. Various activities of the bump-and-grind variety occur, as they often do in this type of film. Unfortunately for these very happy campers, their post-coitus activities are to include being ripped apart by a creature living in the woods who is attracted to the pheromones the campers give off during their, well, fucking. They fuck. It’s in the title.

Don’t Fuck in the Woods will have its world premiere at FearNYC film fest on October 21st!