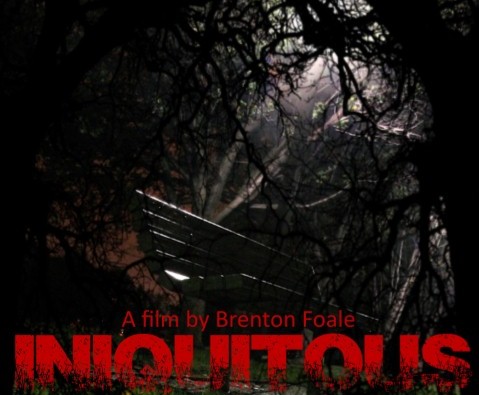 “Iniquitous” is a new thriller film written and directed by Australian actor and filmmaker, Brenton Foale, produced by Fantasm Productions in association with Stand Entertainment.

Since he was just a little boy, Brenton Foale had wanted to be an actor. In 1980, at the age of ten, he heard about a filmmakers’ retreat, run by the South Australian Association of Screening Education (SAASE). The minimum age to attend was ten years. Thinking this would give him an opportunity to learn to be an actor, Brenton attended the filmmakers’ retreat in the Adelaide Hills, but instead of learning to be an actor he was taken under the wing of lecturers and was taught to make a short film. He learned how to develop a story into a screenplay, design storyboards, use three point lighting, camera angles, and edit film using reel to reel editing equipment. He directed his first short film that weekend, “Help is on its Way”, about a brother trying to get help for his sister who was injured while hiking. After that experience, Brenton enquired about the next retreat, and despite the next one being aimed at young adults due to horror and thriller themes, Brenton attended again and directed the thriller “The Runner” about a serial killer who murdered women he came across in a park while jogging.

In 1987, Brenton and his family moved to Melbourne, Victoria, where he soon started acting for screen, with his first professional role as a journalist opposite Michael York in the ABC/BBC telemovie “The Four Minute Mile”, followed by appearances in “Neighbours”, the popular, long running soap that has seen the emergence of such stars as Kylie Minogue, Jason Donovan, and Peter O’Brien, and other shows such as “All The Way” and “Flat Out” to name a few.

Fast track to 1996, at the age of 26, Brenton almost gave up on directing films when his marriage fell apart. Instead, Brenton turned his attention to stage performances as his magician character “The Black Fantasm” and continued his television and movie acting career. In 2012 Brenton appeared in Daniel Armstrong’s “Murderdrome”, followed by his role in Stuart Simpson’s 2013 hit “Chocolate Strawberry Vanilla”, and Vic Tietze’s “A Promise Carved in Flesh”. This year cinema goers will see him in the soon to be released “The Legend of Ben Hall”, written and directed by Matthew Holmes, a film about the notorious Australian Bushranger Ben Hall and his gang, who roamed the Victorian and New South Wales countryside in the 1860s.

In May 2013, shortly after filming Chocolate Strawberry Vanilla, Brenton decided to return to writing screenplays, and penned the first draft for the film “Iniquitous”, which three years and 29 drafts later is soon to be produced into a feature length thriller. “Iniquitous” is about four people who each have personal problems they are desperate to overcome, and through fate they are all pitted against each other, in a game of deception and manipulation, destroying each other’s’ lives. The film stars Jay Bardon (“Extinct”, 2016) as cancer sufferer “Dean”, Stephanie Schrieber as the downtrodden “Fiona”, Tobias Lewis as the awkward boy seeking manhood “Jarrod”, Bec Smith (“Dream of a Shadow”, 2016) as the widow “Erin”, and Marie-Clare Anastasia as the aspiring model “Stephanie”. Brenton Foale is the screenwriter, director and one of the producers for Iniquitous, having founded Fantasm Productions in 2013.