Whiton University is a “killer” place to go to college! 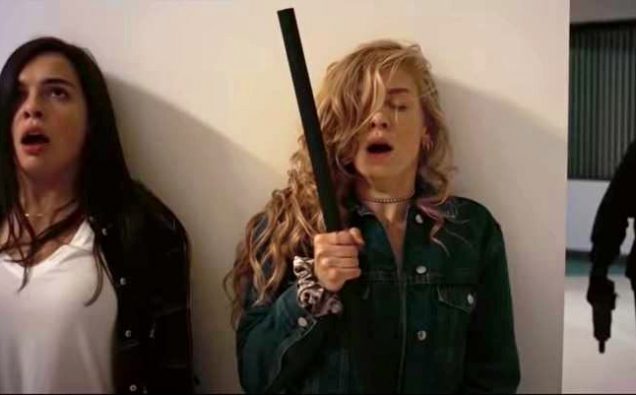 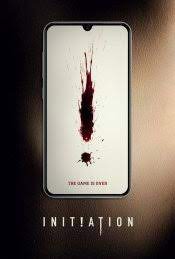 Init!ation is a tense and compelling slasher by John Berardo in his directorial debut. Berardo also wrote the screenplay, along with Lindsay LaVanchy and Brian Frager.

At Whiton U, students use a cruel social media game where women are rated badly if they are given an exclamation point behind their name. I immediately hoped that someone would take out all the slimy jerks at the college either responsible for horrific acts or guilty because they knew and did nothing about it. The whole rating thing pissed me off! Either way, vengeance needed to happen. And happen it did!

Synopsis: In INIT!ATION, during a university’s pledge week, the carefree partying turns deadly serious when a star athlete is found impaled in his dorm. The murder ignites a spree of sinister social media messages, sweeping the students and police into a race against time to uncover the truth behind the school’s dark secrets…and the horrifying meaning of a recurring symbol: a single exclamation mark.

Fraternity dudes calling out girls on social media? Wow, guys just never stop coming up with ways to try to slut shame women. And always so many secrets! Don’t you guys ever go to class?

I wish I could say this wasn’t oh so true in real life, but there are people everywhere who are terrible and cruel. I would like to blame it on the younger generation, but when I was in college it managed to happen even without social networking sites.

What surprises me is that people are still getting away with so much cruelty- even in these supposedly more enlightened times. #Metoo is just the top of a very deep iceberg.

The premise kind of reminds me of where Facebook itself came from- Before it was Facebook, it was Facemash- a website to rate students on campus to determine if they were “hot”, or “not”. In Init!ation girls are rated with an exclamation point after they hook up with one of the guys, so other dudes know who not to date. Really? Even after they rape someone, that girl gets the exclamation point posted on social media. In this college, women do not have a chance! 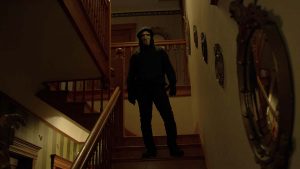 I liked the feel of a classic slasher film with modern technology added. Init!ation starts with a scream of happy college students ready to party.

Homecoming is always a crazy time, and this year is no different. The party turns ugly when sorority girl Ellery (Lindsay LaVanchy) finds her friend Kylie (Isabella Gomez) passed out in a bedroom with a bunch of guys and Kylie has vague memories that lead her to believe she had been drugged and sexually assaulted. Ellery’s brother Wes (Froy Gutierrez) is one of those guys and it is hard for Ellery to believe her own brother could be a part of such a horrible crime.

Unfortunately, the happy screams turn to those of terror after Wes is found brutally murdered at the same frat house. Ellery must face the ugly truth that her brother might not be the nice guy she believed he was. In order to cope, she does her best to try to find out the truth, no matter how much danger that puts herself and her friends in.

More bodies keep turning up, savagely brutalized, nailed to walls, and posed. This is definitely a statement! Someone in a mask and hoodie is out for vengeance, but who can it be? The police were always one step behind the vigilante, and I was totally astonished when the identity of the killer is revealed, which was very unusual for me. I kept leaning towards one character or another because several folks were used as red herrings to throw us off. Most of the people that die pretty much deserved it- so it was hard to get too upset about them.

What I liked: Overall the acting was well done! These kinds of movies only work if the actors can hold their own with the basic tropes including running, hiding, and a lot of screaming. My standout is Lindsay LaVanchy. Even though the story wasn’t incredibly deep, I still believed her very emotional performance. I also loved veteran actor Locklyn Munro. He plays a great asshole, who I had no sympathy for whatsoever!

Using social media and cell phones to give a teen slasher film a modern twist worked in this case. I liked the way they showed the phone messages in little animations all throughout the film, allowing the audience to be connected to the conversations too. That was a great touch.

The practical SFX were bloody and fantastic- a plus for this gorehound. I always love unusual film deaths, and each one was original, brutal, and very inventive. Ya gotta love a murder scene that can make a jaded horror fan like me, gasp. Kudos to the whole SFX makeup team!

In the USA, Saban Films will release Init!ation theatrically, On-Demand, and on Digital May 7, 2021.