Insanity Evolved; A Review of The Purge: Election Year

The New Founding Fathers Have Met Their Match 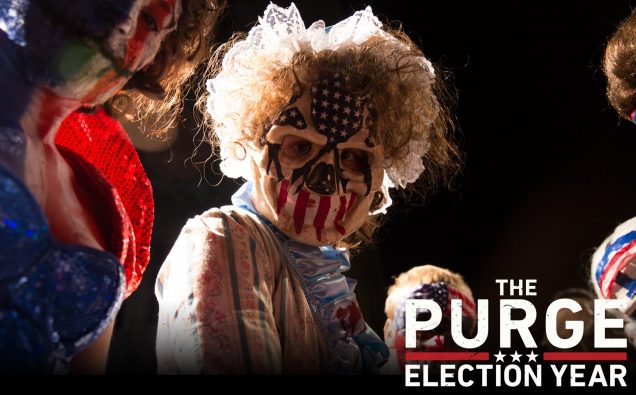 There’s been a lot of jokes going around about how this election cycle might lead to a real purge, (Election Years tagline Keep America Great does sound suspiciously familiar) but if America ever got to the point of the third entry in Blumhouse’s most murder happy franchise, well we would be in sore shape indeed. Chaos reigns with what is easily one of the craziest horror films in recent memory, with all manner of masked freaks, Neo-Natzi attack squads, pig suit wearing psychopaths, and general whack jobs invading the streets of D.C. to unleash the beast and slaughter their worries away. This is a world where national monuments are splattered in blood, God is a Smith and Weston, and violence and those who practice it reign supreme.

Given how outlandish Anarchy tended to be, it can’t be ignored how far Election Year goes as the insanity ramps up to a whole new level.  World building is key here, and as bizarre and outlandish as the world of The Purge might be, it sure is a goddamn fun one.  Expanding the array of nutters past the more conventual (if not creepy) gangs of the franchise’s first two films, Election shows off a wider view of just what people who get one consequence free night would do. From gladiator fights between hulking bodybuilders to gangs taking the opportunity to legally murder the hell out of each other, you can’t say these killers aren’t varied.

One variant that that does unfortunately range on the side of problematic is the contrast between what we see and what were told. The story follows the branching character paths of Anarchy, but mostly focuses on Leo (the cop from the 2nd movie) and new player Senator Roan, a politician hellbent on shutting The Purge down once and for all. Over and over again, were told The Purge is evil, it murders the poor and preys on the innocent, that it’s an antiquated sport of savage bloodlust. From Leo recounting the time he almost took his son’s killers life, to Roan describing her whole family being massacred, it all sounds awful. And indeed were any of us in the same situation, it would be awful.

But that’s just not what were shown on screen. No, what we get is a Beethoven’s Seventh Symphony of every glorious, blood gushing moment imaginable, a giddy ride on a gore streaked Carousel that is just barely maintaining control. Election Year is a film that somehow manages to make murder look fun; a far cry from the sentiment being spread from our haphazard hero’s. Yes, killing is wrong and death is eternal, but the sense of freedom and pure dark joy the purgerer’s leak from every bullet fired, every swing of an axe, is an intoxicating rush that goes directly against the common knowledge of both our real world and the characters.

Well,  not that those characters are anything to write home about. Stock, dull, and bland as over cooked cabbage, this isn’t exactly a motley crew were rooting for. Leo, Roane, and most of the others face the cardinal sin of just being boring, although I would be amiss to forget to mention the black deli owner who serves “pussy and Waffles”, has the unfortunate habit of referring to his comrades as “my negro” and just so happens to have spent his youth running around with a gang, going as far as to save the group with a well timed “gang whistle.” It’s as if the director got his information from a Reddit post titled “Writing Black Dudes 101: Kentucky Fried Character Development.”

Even if the colored members of the cast weren’t crude stereotypes, the social commentary trying to be told is problematic. Glorifying violence doesn’t have to be a bad thing, but doing so within the confines of a narrative trying to tackle such problematic real issues as race relations and white privilege might not be the best idea. Gore for gore’s sake is not exactly unheard of in horror movies, but to propel it alongside a story that’s tends to be more serious than  silly appears more than a bit distasteful.

For whatever reason I can hardly imagine, but my sick heart has  really grown quite fond of the world of The Purge. It’s a world of insanity, of violence and despair, but also one of beauty, of hidden desire and the freeing of humanitys primal spirit. I some ways Election Year gets this in ways the franchise has never before, but it hamstrings itself boring characters, bland story telling, and a muddled message that drag this 3rd entry down with them. It’s a wondrous waltz  through a wicked world, to conclude this most sordid of franchises,  but one whose step ends up just a little off beat.