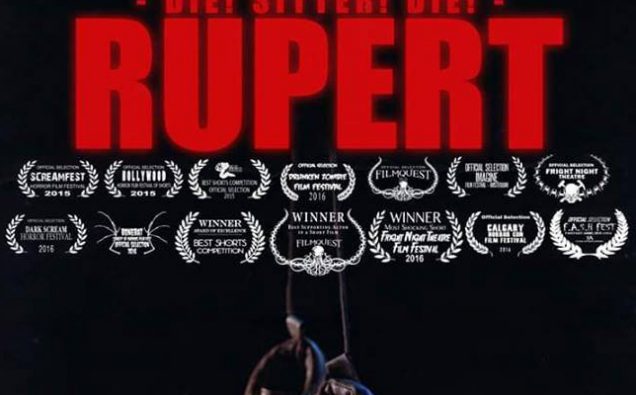 Having been a babysitter in my teens, I immediately got the shivers when I read the synopsis for Die! Sitter! Die!: Rupert. One of my favorite horror shorts from 2016, Rupert hits all the horror tropes in a larger than life (or baby) sort of way. The film is about Alison, who needs money badly for her mother’s medical bills, and takes on a babysitting job. This babysitting job turns out to be more terrifying than she could have ever imagined. Any person who has gone to a stranger’s house to babysit for the first time will know what I mean. It is nerve-wracking. You don’t know the family, the house or especially the kid. Will it be a fun easy night, or a horrible mistake? Well in the case of Rupert– I think it’s fair to say it was not a perfect sitter experience.

Rupert is just part of an upcoming horror anthology titled Die! Sitter! Die! The film will center around a mean and unhappy babysitter, who torments her little charge, by telling her scary stories that all involve babysitters. Each of the 3 stories will be a different horror sub-genre: Psychological Horror, Slasher Horror and Supernatural Horror. 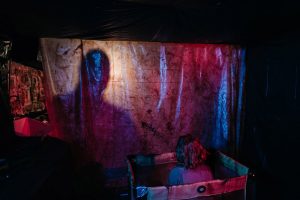 This amazing horror flick will be brought to us by the newest horror sibling team on the block: Lee and Sam Boxleitner. I got a chance to meet the Boxleitner brothers at the recent FASH Fest in LA where Rupert won Best Director, Best Short and Best Ensemble! Rupert stars Caitlin Reilly, Demille Cole-Heard and Lee Boxleitner himself. The actors all worked together perfectly and the practical special effects were amazing! Rupert was funny, disgusting and terrifying all at the same time! Knowing that all this was done with virtually no budget, blows my mind. I can’t wait to see the whole full-length movie. 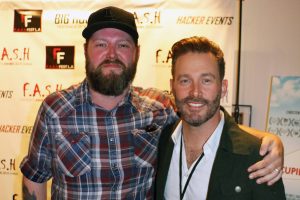 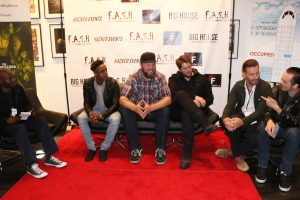 I thought my readers would love to hear about the brothers more in-depth, so I asked Lee if he could answer a few questions. Sam and Lee have finished the script and hopefully we will see the full anthology soon. Until then, enjoy hearing a little about the Boxleitner brothers and the making of Rupert.

Los Angeles Zombie Girl: Lee, how long have you and your brother Sam been doing horror films?

Lee Boxleitner: “My brother and I have been making horror films with our friends since we were both kids. Our first one ever was when I was about 11. It was called Children of the Corny; and it was about young kids that tell jokes so bad, they kill.  HeHe. My brother and I have always had a love for horror movies. It’s all because of our mom. Every Friday night was pizza and a movie night at our house, and she was a big fan of horror. So we started young.”

LAZG: Can you tell me about your anthology Die! Sitter! Die!?

LB: “Our short film, Rupert, is part of an anthology film my brother and I are making called Die! Sitter! Die! about a babysitter that scares a young girl with terrifying tales. Rupert being one of them.”

LAZG: How many film fest awards do you have for Die! Sitter! Die!?

LB: “So far, the short has picked up 7 awards from festivals around the country. We are currently entering our second year of festival runs, so hopefully there will be more to come!”

LAZG: What is the biggest challenge about making indie films- including or other than the obvious cost factor?

LB: “I’d say that the biggest challenge for us in making our films, besides money, is really crew availability. Our crew mostly works for free on these projects, so we can’t get mad when the day before a shoot, we hear that our gaffer got a gig that actually pays so he can’t show up. That can make things a little tricky.”

LAZG: What is your philosophy of movie making?

LB: “I guess I would say that my philosophy is not to take yourself too seriously. I just try to make sure everyone is having a good time while we are shooting. After all, it is just entertainment, and if you aren’t having fun, then it isn’t worth it. Right?”

LAZG: Why are your stories so twisted and unique? That seems hard to come by these days!

LB: “There are really only seven or so stories out there when you get to the bottom of it. I think my brother and I have a unique sense of humor (not sure if that is the best way to put it.) We try to ask ourselves, “what would our reaction be to this situation?” If you put honesty into horror, then it usually comes out more true to life. And let’s face it, those videos on YouTube of scare pranks are hilarious and completely true. Horror can be funny if you are an outsider, so we try to slip as much of that in as we can in the right moments.”

LAZG: Do you guys write everything- or do you work with other writers?

LB: “So far, my brother and I have only directed scripts that we have written, but we would love to take on someone else’s work. Who knows what 2017 will bring?!”

LAZG: What is your favorite part of making horror movies?

LB: “My personal favorite part of making movies isn’t the making of them really. It’s more watching the face of someone who hasn’t seen the film before and knows nothing about it. When they jump out of their seats in fear, or burst out loud laughing, it’s a rush that I imagine very little can compare to.”

LB: “I have some funny stories about making Rupert, but all of them would give away the special surprise we have in it, so I won’t go into those. My brother and I have lots planned for this upcoming year, but I’m not really allowed to talk about them. I will tell you that this year we are completing Die! Sitter! Die!  Hopefully it will be out by Halloween 2017.”

Rupert will continue to be in the film fest circuit- so look for it. You can find out all the latest info on the Die!Sitter!Die!:Rupert Facebook Page