Interview with Tyler Savage about his Dark Thriller ‘Inheritance’ 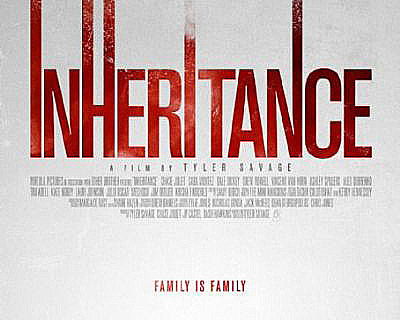 Recently I got a chance to screen the film Inheritance and fell in love with the indie thriller.

Inheritance is Tyler Savage’s first feature film and wow, what a terrific debut! A beautiful slow-burn of a horror movie, I can’t stop thinking about how deeply I was drawn into the film! As I shared in my review, I kept leaning into my computer so I wouldn’t miss anything, I was that mesmerized! Please check out my review by clicking here.

Synopsis: Ryan Bowman (Chase Joliet) finds out his birth father has died and he just inherited a 2.5 million-dollar beach house. Having thought his real dad was already passed, he and his pregnant fiancé Isi, (Sara Montez) go to see the house. Once there Ryan’s interest in finding out more about his father piques and he stays in the house instead of following the instructions his father left him, “Sell the house immediately.” Whether supernatural or psychological- Ryan pushes his fiancé away, learns some horrifying things about his parents and seems to be poised to repeat past family transgressions. Nature seems to be winning out in this nature vs nurture film.

Even though I was left with a lot of unanswered questions- I loved this movie! The history of the house including the land it sits on was very dark; and the guys who used to hang out here were very bad men, who did very bad things to young Native American girls.

Seeing that I enjoyed Inheritance so much, I was very excited that I got a chance to talk to indie writer/director, Tyler Savage, to find out a little more about this amazing movie!

Los Angeles Zombie Girl: Tyler, how long have you been in filmmaking and what made you want to make them?

Tyler Savage: “I’ve been making films (if you can call them that) since I was a child, and professionally working in the business since I graduated from NYU back in 2009. Since I was obsessed with film from an early age, the decision always seemed clear. I think the romance and magic of telling a story has always been the primary appeal. Making sense of reality through story.”

LAZG: You are quoted as wanting to examine your feelings about family and heredity, and did it through this movie. What did you discover about yourself that made this an important story to tell? Did it help you with the worry that you could be defined by the darker aspects of your heredity?

TS: “That’s a great question… While I definitely think there was something cathartic about exploring these ideas through story, it’s hard to pin down a specific thought or feeling that led to making this film. I’ve always been fascinated by the question of nature vs. nurture, and I wanted to explore themes of free will and the idea that aspects of ourselves may be out of our control. I think I’ll likely meditate on these tough questions for all my life, so I can’t really say the processes relieved that dark curiosity.”

LAZG: Where was Inheritance filmed? Is any of the story based on any real history of the area?

TS: “Most of the film was shot in Malibu and San Luis Obispo County. While the story wasn’t inspired by those specific areas, the tragic history of Native Americans in California (largely the central valley) was hugely influential in shaping the haunting backstory of the Morse family. The oblique references to mass murder and sexual slavery were directly informed by the bleak history of this beautiful state.”

LAZG: There were many unanswered questions at the end of the film. Can you give us a little more back story?

TS: “I prefer to leave things up for interpretation so they might resonate more personally with viewers, allowing people to project their ideas and perspective onto the story. That might sound like a cop-out, but the ‘reality’ of the story and this family is fully known to me, I just prefer to leave a little veil on it.”

LAZG: Are there plans for a sequel?

TS: “Yeah, to some degree. I don’t think it will be a typical sequel but I hope to make a second feature that explores some similar ideas and takes these themes of family and heredity further.”

LAZG: How has the film been doing in film festivals?

TS: “Well we’ve only played once so far (Dances with Films) so it’s hard to tell. We were disappointed by some of the bigger festivals (Sundance, Berlin, SXSW, etc) but the world of independent film has become so political that it’s best not to take those disappointments personally (easier said than done). Right now I’m just thrilled that we’ve been getting such a positive response from genre critics because they’re true movie fans and they’re not afraid to be critical.”

LAZG: What kind of a budget did you have and how did you get such great people? It looked and sounded like a high budget film!

TS: “Thank you! Love hearing that. We were able to pull it off for about 200K, which is far more than some but obviously far less than most. From the jump, my goal was to approach a story that fit our means and my experience level. That allowed us to take time and hone moments, something that you don’t get to do on most indie sets. And my dear friends Drew Daniels and Margaux Rust are incredibly talented and hard working, and their work helped us achieve that more polished feel.”

LAZG: I had trouble putting the film in a pigeon hole as far as genre goes. What kind of movie do you categorize it as?

TS: “Yeah, I do too! But I think psychological thriller (or ‘psychothriller,’ a term I recently learned) is a fairly accurate label because the film is essentially a hyper-subjective descent into madness.”

LAZG: Was there a favorite part of making the movie?

TS: “Shooting it! Those twenty days of production were honestly some of the best days of my life. Collaborating with friends and people you trust and respect is one of the greatest joys.”

LAZG: What were your challenges while making the movie?

TS: “There were plenty of small things, but I think the shooting gods were with us most of the time because we avoided the type of catastrophes that usually accompany small film productions.”

LAZG: Was it ghosts or was he just plain crazy?

LAZG: Is there anything else you can share with the readers about your process, the shoot, location, actors, etc….

TS: “I’ve had a long education in film, but nothing taught me more than going out and making this feature. The biggest lesson for me was that you have to stay focused yet open at all times. I tend to over-plan, which can be helpful, but you have to be simultaneously rigid and loose while shooting so that you can get what you need while also keeping your mind open to spontaneous gifts drifting into frame.”

Add together the great cinematography, with terrific acting, a superb script, an awesome soundtrack, edit it beautifully and you have a film that is sure to win lots of awards! I recommend this movie!! It is a mystery that unfolds, but not all the way, leaving you room to make your own decisions and to also analyze some of your own personal feelings about family. I must admit though, I would love to see that sequel, just to have my questions answered and to learn more about the dark history. Thank you, Tyler, for making this a wonderful tale of madness or ghosts, or is it both? No info on where to see it next, but I’m sure it will be at another film fest soon!