Interview with Brett McGinnis, builder of the “Annabelle” replica

A couple of weekends back, myself and my fiance, TheBlood-Shed editor Amy Daugherty, were special guests at Paranormal Super Con in Erie, PA. And right across the aisle from... 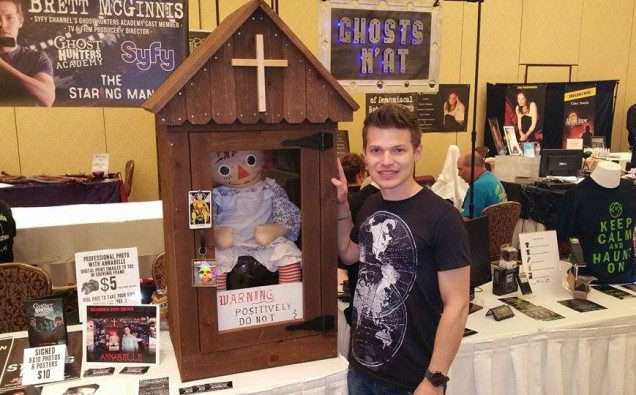 A couple of weekends back, myself and my fiance, TheBlood-Shed editor Amy Daugherty, were special guests at Paranormal Super Con in Erie, PA. And right across the aisle from out table sat Brett McGinnis from Ghost Hunters Academy. And with him was his creation, its world debut, the only 100% authentic replica of the Annabelle doll, infamous from the “Annabelle” and “Conjuring” films, as it actually appears in the museum of Lorraine Warren. This clearly necessitated an interview. Here’s how it went.

John Lepper: So, Brett McGinnis, you’re from Ghost Hunters Academy, correct? Is there anything else of note you’ve been involved in?

Brett McGinnis: Well, I was in Ghost Hunters Academy. That aired in 2010. Since then, I went back to school and finished up my film degree. And since I’ve been out of school, I’ve started to direct some TV commercials. I’ve actually directed over 50 TV commercials for Wal-Mart. I’ve done a few for AOL and for Yellow Pages. I do a lot of music videos, promo videos, that type of thing. And then just this year, I directed my first full length documentary, a paranormal documentary, which is “The Staring Man.”

JL: Very cool. Now, one of the things you brought to this convention is the world’s only completely authentic replica of the Annabelle doll, made famous by the movies “The Conjuring” and “Annabelle.” It looks very impressive! What made you want to build this?

BM: Well, I obviously have a very strong interest in the paranormal. I think it’s fascinating. And I really like Lorraine Warren a lot. I actually met her before “The Conjuring” and all those other things came out. In the paranormal world, she’s a legend. She really is. And, so, I met her for the first time in 2010. She was doing a lecture around the area I am actually from. I met her there, I went to her lecture, and it was awesome! They did a drawing and I actually won an opportunity to do a walk through with her on campus. That was kind of cool, being with a living legend, doing a kind of mini-investigation with her. That’s the opportunity of a life time, I think.

I ended up seeing Lorraine Warren again in October, 2013. She was lecturing at the same spot. And then, later that year, December, 2013, I decided I wanted to take a trip to her house, see another of her lectures, meet her there, and get to actually see her museum and see the actual Annabelle doll. I was just infatuated with the Annabelle doll and the Annabelle story. I think it’s one of the better known item possession cases that exist. Everybody thinks dolls are creepy, you know? It’s just a fascinating thing to me. And I guess from there, since I saw the doll, I wanted to create a replica of it.

JL: Alright. Well, you’ve told me it was quite a process to put this all together. How long did it take you to put together this replica?

BM: To build the case took about two months. We were trying to make it as authentic as we possibly could, so the process to put it together was very time consuming to make it 100% authentic. If there was a nail that was a little bit crooked, we made it a little bit crooked. We worked off of close to 100 photos of it. Some photos I took, some photos were just on the internet. Just different references of everything to get everything to match up right. It took two months to build the case and just to find the correct Raggedy Anne doll took about a year. There’s a lot of Raggedy Anne dolls out there, they’ve been making them for about 100 years, I think! There are like 3 different manufacturers, there are a lot of different sizes, different outfits, so even that was the first step I took and it was difficult.

JL: So, to be clear for the readers, this is the exact same Raggedy Anne doll as the possessed Annabelle?

JL: That’s impressive. Do a component-by-component breakdown for me, the hut, the hinges, the sign, how difficult was each bit of this replica?

BM: Well, the case itself is a pretty primitive case. It’s not a complicated case. But trying to replicate it 100%, to get that detail to it, is difficult. I had to try to use Ed Warren’s process, reverse engineer his case, and figure out how it works. It was a lot of looking at photos, getting measurements right, making sure the doll lines up right so it is sitting exactly as it really is. It was a difficult process. I didn’t measure it when I saw it. I saw it with my eyes, I took photos, but most of the measurements are done using the tarot card, because that is a size point that we could visually see and hold in our hands. Just getting the right type of wood was difficult, getting it the right color. The nails, making them look the right way. The sign had to be hand done, hand painted. Making it look right was very difficult to do, but it was worth it. The end product, I couldn’t ask for better. It is the only 100% accurate Annabelle replica in the entire world.

JL: That’s really something. Now, you said you had the hinges custom made, the skull sticker you had shipped from Australia.

BM: Right. The hinges had to be custom made. There’s nothing out there that is close enough to the actual hinges, so we custom made those hinges. The sticker that hangs on the door, the skull sticker, I wasn’t sure exactly which one it was. I just had to type “holographic skull” into google and go page by page by page. I was finally able to locate it and get it in from Australia.

JL: Very good! And the end result is very, very impressive! You must be very proud of it.

BM: Thanks, yeah! I love it! I’m not exactly sure where I am going to put it in my apartment. I might have to build a special stand to put it on maybe. Or maybe I should just put it in the basement like Lorraine and start my own museum of haunted replica props, huh?

JL: That would work! That sounds like it would be very interesting!

BM: Maybe I’ll do like a complete replica of her complete museum!

JL: That would be very cool. I think you could definitely attract a lot of interest!

BM: But I recommend if you are interested in the paranormal, talk to Lorraine Warren. Take a trip up there, she does lectures from time to time. Check it out, it’s a very cool place. Lorraine is a living paranormal legend. She’s one of the first public paranormal investigators, her and Ed. She’s very interesting and I think she’s great!

JL: Awesome! So, thank you very much for taking the time to do this interview, Brett.