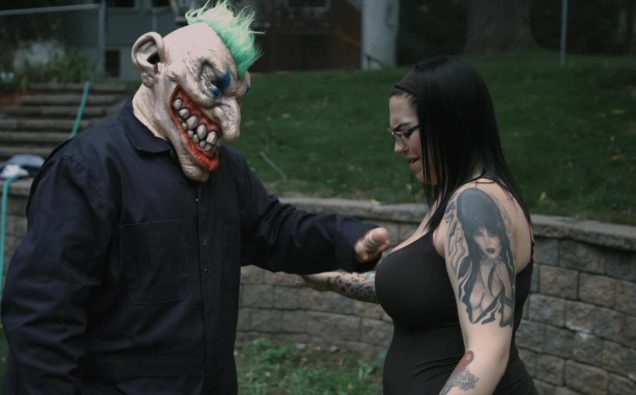 Evil Night is a low budget indie slasher from 1992 which has accrued a respectable cult following. So much so, that it was remade in 2014 and is now getting a sequel titled Another Evil Night. This new addition is being done by writer/director Jason Harlow in his directorial debut. I had the chance to interview Jason. Here’s how it went!

Johnny Macabre: Hi, Jason. Thanks for taking the time for this interview. Now, you are the writer and director for the upcoming Another Evil Night, a sequel to a 90’s cult classic. For those not familiar, can you tell the readers a little about the original film?

Jason Harlow: The original film is personally one of my favorite shot-on-video slasher films. It’s crazy in so many ways. The story follows a tormented young man named Jimmy Fisher. He gains telekinetic powers and comes back to kill all of the people who tormented him. And of course, he wears that insanely creepy clown mask. You could say I’m ridiculously honored to be doing a direct sequel to this film.

JM: Sounds like a pretty fun flick! Tell me, what’s the plot line like for the sequel?

JH: The story for the sequel stays true to the original in several ways. Justin Bates and I have mapped out a very cool story and it’s gonna be so cool once we’ve finally brought it to life. The story follows a bullied teen named Andrew, who, with the help of a returning Jimmy Fisher, seeks revenge upon a group of partygoers on Halloween night. Jimmy dons the original creepy attire from the first Evil Night, and Andrew will be wearing a creepy clown mask as well. The two work as a perfect unit, and obviously, a bloodbath ensues.

JM: That sounds amazing! Alright, now I know this is not your first time screenwriting, but it is your directorial debut. What’s that like? Are you looking to any known names for inspiration on how you are going to do things?

JH: Well, although it may seem a little strange adding an installment to an already-established property for my feature length directorial debut, I feel I’m more than ready to take this on. I’m not necessarily using anything for inspiration, and I’m definitely doing things out of the ordinary in terms of the story, but I do think there a few films this could draw comparisons to. This film will be kinda like if you took Silent Night, Deadly Night but made it take place on Halloween. This film could also easily draw some comparisons to Headless, Satan’s Little Helper, and Slaughter High, and in terms of being a sequel, this will be similar to Return to Sleepaway Camp in more ways than one…not only is it being released 25 years after its predecessor, but with the original killer returning, and the whole bullying aspect, I could see where the comparisons would come from.

JM: Interesting comparisons and all great films to draw inspiration from. What’s your time line? When does production begin?

JH: Well, some of the film is already shot. It’s time to get back to work, though. We’ve got a long way to go, but it’s gonna be great shooting outdoors in the fall. The plan is to have this film released a month or two before Halloween 2017.

JM: Ok, that sounds excellent! Now, sequels for slasher flicks are a slippery slope. Once you do one, they seem to keep coming. Is this the start of a franchise or is it two and done?

JH: That remains to be seen, but I definitely don’t want to rule it out. If Todd wants me to do yet another Evil Night film, I wouldn’t be against it by any means. Hell, maybe we could even call it Yet Another Evil Night!

JM: I was thinking just that. lol. Go the “Sometimes They Come Back” route of sequel naming. Just keep adding more words. Alright, well this is sounding amazing. Aside from being willing to possibly do another sequel, what other plans do you have for future projects?

JH: I’m doing a fun film for Screamtime Films called Meatball Massacre. It’s still in the early stages, but hopefully it will come out sometime soon after the release of Another Evil Night.

JM: Sounds great! Alright, thanks again for taking the time for this interview. Before I let you go, do you have anything else you want to tell the readers?

JH: Thanks a ton for the opportunity, I really appreciate it. I’d like to say thanks to everyone who’s been keeping up with the progress of the film. The Facebook page in particular has garnered a lot of attention, and I couldn’t be more happy about that. I’m looking forward to getting this film done and released, and I really hope people will enjoy it. I also hope this sequel brings more and more attention to the original film. Again, thanks a ton. You guys at The Blood Shed are freakin’ awesome.