It does for paramedics what Maniac Cop did for police officers 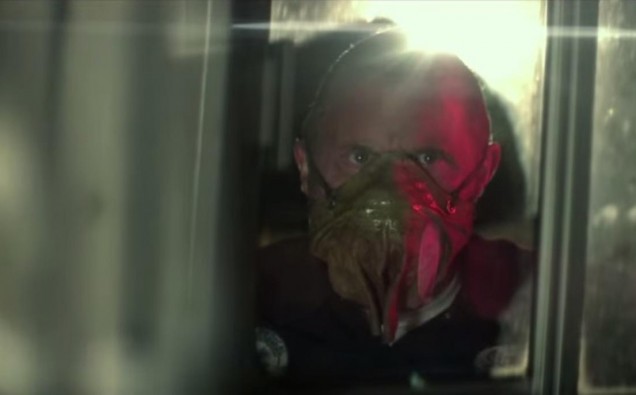 If you haven’t heard of it yet, Old 37 is a new horror film focusing on two brothers who intercept 911 calls and pretend to be paramedics, all so they can get close to torture and kill their victims. It’s a great movie that really does for paramedics what Maniac Cop did for police officers. And it’s all the more awesome for the fact that the two brothers are played by none other than horror legends Kane Hodder and Bill Moseley. I actually had the opportunity to interview Kane Hodder, the actor famous for his 4 times as Jason Voorhees, about this new film. Here’s how it went!

Johnny Shreck: So, how are you, Mr. Hodder?

JS: Good, good. So, I had a chance to watch your movie, Old 37. It was very interesting! The way I described it, I said it does for paramedics what Maniac Cop did for police officers.

KH: (laughs) I just think it was a premise that had never been exploited before. I was kinda amazed that it hadn’t been.

JS: I agree. And it’s accurate in that anyone can listen in on those radios.

KH: Yeah, that is true, you’re right. I don’t know if it could ever really happen like that, but it certainly seems like it could.

JS: Yeah, it’s a very disturbing premise and moreso because of just how possible it probably is.

KH: And when they told me I might possibly be playing Bill Moseley’s brother, I thought, “Wow, that would be great!” Because, at that time, we hadn’t done too much together. Now, since then, we’ve done a number of films together. He’s probably the one actor I’ve done the most films with now!

JS: Oh, wow! Yeah, like I mentioned to you earlier, I met Bill just yesterday (This interview was done at the Rock & Shock convention over the phone in the lobby. Bill Moseley himself was a guest.) He seemed like a really great guy!

So, do you have a favorite scene from the movie?

KH: Now, that’s interesting, I hadn’t really thought of that. I think I do. And it was all Moseley’s idea.

KH: The chicken dance. Was completely Moseley’s idea. And I thought “That is brilliant because it’s one quick scene and you suddenly feel a little bit of empathy for me, my character, and at the same time you detest him even more for doing that to his own brother!” So, I just thought it was such a brilliant idea. That’s one of the reasons I like working with Bill is that he’s so creative on the fly and comes up with ideas after we’ve already shot the take of something. And then, all of a sudden, wow, that’s way better! So, that’s probably my favorite scene because, you know, I’ve been killing people throughout the movie and you see the audience go “awwww, that’s sad.”

JS: (laughs) That’s a really good point. And I think it’s really cool that that was a sort of improvised scene. It’s really interesting how often that happens in movies. How this improvisation just creates some of the best scenes in the film.

KH: Oh, yeah. And I’ve worked with, you know, directors who are also like that, not just actors. Adam Green and John Schneider, who used to be on Dukes of Hazzard, I used to work with him back in the day, he’s the same way. After we shot a scene once, he’d be like “hey, how about this?” and it would end up being even better.

JS: Very cool. Well, I think it’s interesting you mentioned Adam Green. Because the Hatchet films, with you playing your own father, basically, that was the first time you really tried getting out from behind those full bodysuits like Jason and Victor Crowley. It’s been interesting seeing you play more open faced character recently. I’ve really liked that.

KH: Yeah, it was part of the request I had for Adam when he asked me to play Victor. I said, “I would like to show another side.” So he kind of wrote in the father character for me so I could do that because that opens a lot of doors.

JS: Absolutely. It’s a very different acting process, you know, playing the more bodily, physical silent characters and playing characters where you are showing your facial expressions or talking. Do you have a different process for getting into both of these different types of characters?

KH: Well, sure. I mean, it’s so completely different. I’ve never been trained as an actor in any way. I’ve never had an acting class. Nothing along those lines. So, if I do in fact have any acting ability, I attribute it to just watching quality actors work and just observing them. The biggest case in point being, I sat for 4 weeks on a movie called Monster. I was the stunt coordinator and I had to be on set the whole time but I didn’t have a whole lot to do. And I just observed Charlize Tharon in her process and I think that was the best learning experience anyone could have. She won an Oscar for the role, so obviously she did a great job. And just watching her process was invaluable to me.

JS: Ok. I think you do have a good bit of talent there for both styles, you know, the physical where you are playing monsters and actually getting out from behind the masks and doing the more expressive stuff. I do think you are very good at that and it’s great seeing you do both.

KH: Well, thank you. And I always make it clear that acting behind a mask is certainly not easy and almost more difficult than actually being able to use your face and you voice.

JS: Absolutely, I can definitely see that. You have to use your entire body to express emotions that you normally, in day to day life, are used to being able to express in completely different ways.

KH: Right. And also, being able to do so without looking like you are doing exactly that. Because so many people that try to play characters like that end up trying too hard. And it’s over acting and it’s too obvious. It’s really a fine line to walk to do that stuff without making it look forces.

JS: That makes sense. Well, it’s been great talking to you. I actually do have to get back to my booth. Before I let you go, is there anything else you’d like to tell the readers about Old 37 or any other upcoming projects you have going on?

KH: Well, sure, I mean I am really happy with Old 37. It was a fun movie. I think it’s really good. My son really likes it, my young son says it’s one of his favorite things I’ve ever done, so that’s kind of cool. And, you know, I’m about to embark on doing motion capture for a Friday the 13th video game.

KH: Yeah, I’m going to do the motion capture for Jason, of course.

JS: (laughs) You are the fan favorite!

JS: And thank you, Kane. You have a good one.

And scope the trailer below!