Interview with Marc Echave, creator of Terrordrome: the world’s only horror fighting game

Who would win? Play and find out! 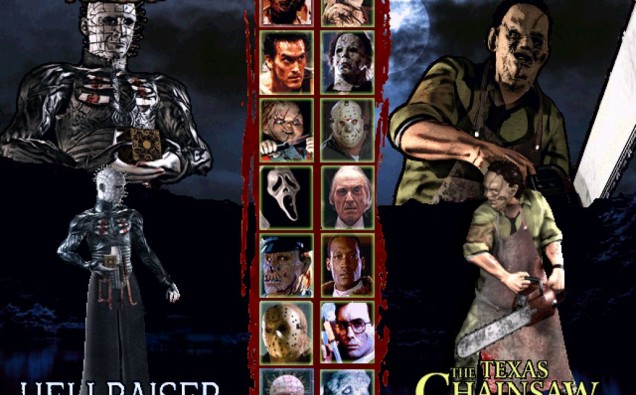 For those unaware, Terrordrome is an indie game for PC. It is a fighting game featuring some of the greatest iconic characters in horror history. Namely Freddy Krueger, Michael Myers, Classic and Undead Jason Voorhees, Ash Williams, Maniac Cop, Tallman, Leatherface, Ghostface, Chucky, Candy Man, Herbert West, Pumpkinhead, and Pinhead. You pick a character and play through the gauntlet. Each character has a different moveset and style. For example, Chucky is a cheap piece of shit who avoids most mid and high attacks due to his height, ala Gon from Tekken 3. Not bitter. Really. Promise. The game is great though. It’s one of the best examples of success in indie horror gaming. Oh, and it’s free!

Today, I caught up with Marc Echave, the man behind the game, and asked him some questions on what went into it. Here’s how it went!

John Lepper: Thank you, Mr. Echave, for giving me the opportunity to interview you. You are the man behind the indie game Terrordrome, probably one of the most interesting tales in horror game development history. What gave you the idea for this game?

Marc Echave: Well, first of all I’ve been a horror fan since I was a kid and I also love fighting games, so I thought it would be cool to mix these 2 genres, At that time, I already had some knowledge in 3D, so I decided to do it! That was like 15 years ago.

JL: Wow, and it was just about a year ago that it saw completion. Hell of a commitment. How did you decide which characters you wanted to include?

ME: I didn’t plan to make the game it became, it was just a hobby so I just wanted the most popupar horror characters to start with, the most classic that come to everyone’s minds are Freddy, Jason, Leatherface, etc… They were also my favorites, so I started with them. As the game progressed I had to choose who could be added to the roster, so I had these “rules” to select characters, they would have to have at least a sequel (at least 2 movies), have a distinguishable weapon signature and be part of the horror realm.

JL: That makes sense. Let me ask you this, because I have seen other people ask. If Hatchet had come out a few years earlier, would we have seen Victor Crowley as an addition to the game?

ME: Yes, very possibly. He’s not a very interesting character, in my opinion, as he’s a kind of Jason rip off, but why not. I’m not a fan of Jeeper Creepers, but this character had even more gameplay potential. Didn’t make it to the final version either.

JL: What other notable characters were considered?

ME: Leprechaun to compete with Chucky maybe, but I’m not even familiar with Leprechaun movies, I think I would have gone into a different direction adding action movie/sci-fi characters. I would have loved to add Robocop, Terminator, Alien, Predator, hell even guys like Mad Max or Snake Plisken would have been fun.

Oh, yes I know: Blade, and Selene from Underworld were seriously considered at some point.

JL: Oh, wow. It could have ended up with a totally different dynamic! Interesting. Ok, so I personally followed the development for several years. I think when I first became aware of the game, there were six characters. Through that time, I am guessing from watching what was going on that your biggest setback was the cease and desists from Orion and New Line concerning the usage of Ash, Freddy, and Jason. How did that come up? How did you overcome it?

ME: First New Line contacted me in a very informal email. I thought it was a joke, but it wasn’t. The guy was asking me to remove Jason and Freddy because they were a property of Warner, and he told me that Orion would ask me the same for Ash (apparently the guy had a friend at Orion or something, it wasn’t clear to me). I tried to seek legal help and I even contacted a lawyer who immediately wanted to charge me $5000. There was several email exchanges with their legal department. It didn’t matter if the game was free and made them free advertising, they simply wanted me to take Ash, Freddy and Jason out of the game, therefore ruining the entire concept.

I thought I had no real choice even if I thought it was more about intimidation. So I released a version without these characters (had them replaced by doubles of other characters I think). In the meantime, fans found the way to manually add these characters from older version into the latest one. I had to remove their pictures in the website as well. One year later Mortal Kombat 9 DLC comes out…. with Freddy as a playable character (and rumor of Jason), for me it was very clear these events were linked. They shut me down so they wouldn’t have any “competition” when they would release their Freddy (and somehow “steal” the idea by the way).

I kept quiet for a year or so, releasing a version without the 3 chars and avoiding interviews. Then I slowly added them back, waited for any letter or something. They never bothered me again. So I think I was right, it was all about having some sort of exclusivity with their DLC.

JL: You played it smart and waited them out, basically. Good strategy! And if paid off in spades. You went toe-to-toe with huge studios to get this game made and you came out on top. That is impressive. Now, I have seen you post that you have something even grander in the works. Any new news on that?

ME: It depends what are you referring to. We kind of announced we wanted to do TRDM2, but we are currently working on something totally different, a fantasy/action/adventure game.

JL: I was referring to TRDM2, but can you tell me a little about both projects?

ME: Sure. With all these legal issues we had, right after the cease and desist letter and MK’s DLC, I was thinking of a way to exploit TRDM’s concept whitout having to deal with licenses problems. I finally found a loophole and some interesting ideas to explore like using characters that are in the public domain. I was excited with what we could potentially do, but at the same time I needed a break from Terrordrome and fighting games. So I decided to launch a different project (Land Of Labyrinth). To this day I’m still not sure it was the best decision (Fans and followers of Terrordrome didn’t seem so interested in this new game. I guess it’s a very different genre, not the same target at all) but now I’ve invested enough time and money to not give up and the game was recently greenlit on Steam. This comforts me that I’m doing the right thing after all. Ideally, we’d love to work on TRDM2 once we complete and release LoL

JL: Sounds great! I’ll be sure to check LoL out! Ok, one last question. My favorite character to play as in Terrordrome is Pumpkinhead. Who is yours? And why?

ME: I like Maniac Cop and Herbert West, maybe because they’re the latest ones. West is very funny. Perhaps the craziest one.

JL: I do agree he is definitely the wild card of the roster. Alright, thank you again for this opportunity to interview you, Mr. Echave. Before I let you go, do you have anything you want to add?

ME: I went to see your website and it looks pretty neat, professional, and promising. I wish you the best with it, and thanks for your interest and support. It’s very apreciated!

JL: Thanks for the praise! I can’t wait to see what you do next! And thank you again for the opportunity to interview you.

So, if you want to play an awesome free game, be sure to check out Terrordrome!