Interview with Semi Anthony of “The Butchers” and “Modern Family”

A talented student of Amy Lyndon 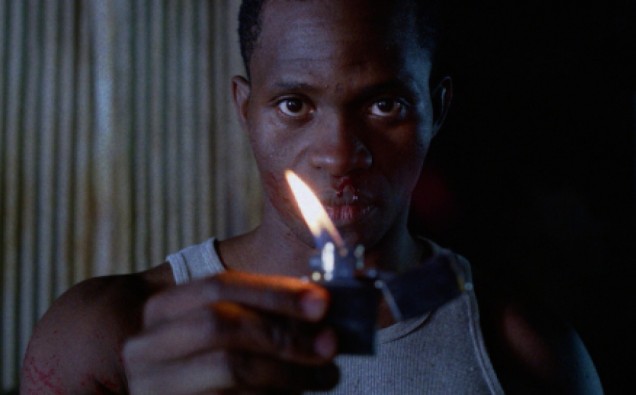 The other day, I had the opportunity to view “The Butchers”, aka “Death Factory”, and interview actor Semi Anthony who plays antagonist JB. Here’s how it went!

John Lepper: Mr. Anthony, thank you for taking the time to interview me today. I actually just finished watching… now is it actually being called “Death Factory” or “The Butchers”?

SA: Yeah, in the UK and Germany it still goes under “Death Factory”. We’re trying to change it to “The Butchers” out there.

JL: Gotcha. So, I saw that this was your first role in a horror movie. What made you want to do horror?

SA: You know, I didn’t have a preference really when I was starting out. I was blessed to have my hands on it. One of the writers, his name is Stephen Durham, we sat down back in 2012 and we decided to create a team of creative minded people. You know, and out of all that came the genesis of “The Butchers”. It’s not like I just went out and said “I want to make a horror film”. No, this industry is crazy. You never know what’s going to come. You just have to go out and do whatever you got to do to make it happen.

JL: Absolutely. I mean, when you’re starting out you really can’t pass up anything.

SA: No, you don’t, you don’t. I mean, I started out doing background work. That’s how I made all the contacts I have today that are helping me out in the business. It’s not easy to do. You have to do all this crazy stuff to come out on top. I worked in background for a couple years. Then I stopped and went back to acting school to perfect my craft as an actor. And then when I came out, I came out in full glory. That’s when I auditioned for “Modern Family” and I got two callbacks in one week, you know, which is good for an actor in Hollywood. To get a callback, you have to know what you’re doing.

JL: Oh yeah. Now, you said you went to acting school. What methods were you taught?

SA: I was taught the Meisner technique but it didn’t really help me out. So, what I did is I did my research and I met a lady named Amy Lyndon. She’s a friend of mine and my personal coach. She teaches the Lyndon technique. What this technique does, it doesn’t teach you how to act. It teaches you how to book the job.

JL: That’s actually interesting because I interviewed an actress, Michelle Tomlinson, just two days ago. She also studied under Lyndon.

SA: Oh, yeah. Lyndon’s phenomonal. She’s has more than 10 students working as actors on big shows right now in Hollywood. She’s really, really good. She’s actually the one who helped me before I got this job. She knows what she’s doing.

JL: That’s very cool. Yeah, I have loads of respect for actors who actually go out and actually study the craft. I myself am a graduated theatre major. I know all the work that goes into it and I have just tons of respect for it. So, I think that’s pretty cool.

JL: Not at all. Now, I see your next movie is also a horror movie, “Abby Grace”. Can you tell me anything about that?

SA: Yes, it’s I think it’s more like suspense. Like Paranormal Activity. There’s not a lot of blood in it. It’s a supernatural thriller dealing with a vengeful spirit who causing havoc with two unsuspecting siblings. And I get to play “Roman”, who is a spiritualist there to bless the house and cleanse it of any negative energy. It’s set in the woods down in Missouri. We shot it for three weeks out there in the cold. It’s got distribution set up and will be released in March of this very year.

JL: Ok. Yeah, because I didn’t see a lot of information for it up on IMDB yet. They had the cast list, but there was no plot synopsis yet.

JL: Alright, sounds good. Now, your role in “Death Factory”, or “The Butchers”, the role of JB, was playing a pretty evil villain. How did you get into that character?

SA: To me, I do a lot of research. This film is based on real people but not real events. What I did, I went back to when these people actually existed, when they were killing all of these people. I learned some of their behaviors. How they behaved on a day to day basis. And on top of that, I also sat with my acting coach, Amy Lyndon, and we also went through it. It was a bit challenging because I had to work with my craft as an actor, I had to work on my accent for more clarity. I went through it. I did a lot of research. That’s what helped me to get into character.

JL: Well, your performance was very well done. I was impressed.

SA: Thank you much.

JL: So, what else do you have going on in the future? What’s going on after “Abby Grace”?

SA: I have a short film that I am working on right now. It’s called “Love is a Four Letter Word”. It’s about a player who’s getting played in the end. You know, there’s always somebody better than you. It’s like a dramedy. And the whole deal is to make it into a short film, submit it to festivals, and then turn it into a TV series. Hopefully it gets picked up on prime time. And I also have “The Butchers 2” coming up in July.

SA: Yeah, we have a sequel coming up.

JL: Yeah, I did see it did have an open ending. So, will you be reprising the same role?

SA: Yes, I will. It’s set up to start filming, I think, the first or second week of July. And I have a lot of other TV projects lined up for 2015. This year should be a very good year for me.

JL: Sounds good! So, can you give me any plot details on “The Butchers 2”?

SA: You know, I don’t know if I want to spill that out right now. How about you just wait and check it out yourself? Maybe I’ll send you a private link before it’s released. I just don’t know if talking about it too much is a good idea right now.

SA: Just for you alone. Not for the public. Because we want to surprise them, we don’t want them to know what’s going on.

SA: Yeah, I’ll make sure I shoot that to you.

SA: Not a problem.

JL: I do want to thank you for taking the time to do this interview. Before I let you go, do you have anything you want to say to the readers?

SA: Not really. I do just want to say to keep supporting film. They can follow me on my twitter. It gets updated almost every other day. I also have an Instagram. And thank you for having me too.

JL: Not a problem! It’s my pleasure.