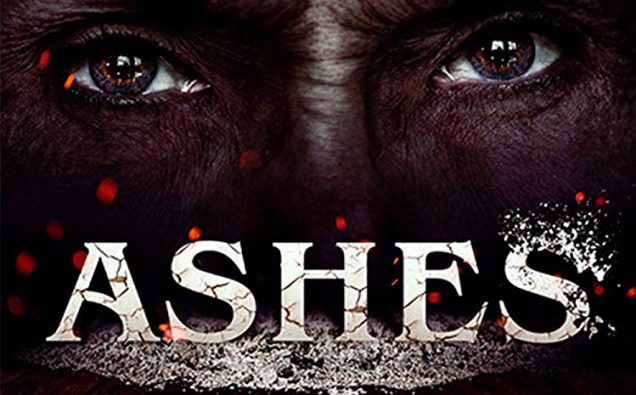 I have fallen in love with the film Ashes! It’s kinda hard to categorize though. Is it first a comedy, or first a horror film? I describe it as disturbing and hilarious in equal amounts: The kind of film that makes you laugh out loud and then gasp as it catches you off guard with gore. Unique and entertaining, I think this film will have a following of fans that love it without having to pigeonhole it in a particular horror genre. You can read my review of Ashes by clicking here. 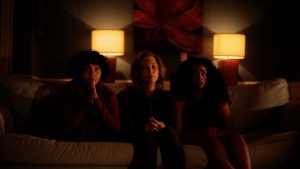 Synopsis: After a family’s “black sheep” aunt passes away, they’re reluctant and creeped out to receive her cremated ashes. But when a series of strange, supernatural misfortunes beset them, they’ll have to go through hell to be rid of her angry spirit once and for all.

Ashes was an eclectic mix of comedy, with an effectively scary atmosphere, alongside some very gruesome horror. Though there was an abundance of humor, the scares were big, loud and gory! The SFX makeup was incredible! And well- the acting was fantastic all around. I believed everyone as the family they were portraying. Actress Melinda DeKay was incredible as Aunt Marion! She was truly frightening and very serious. She was so thoroughly committed to the character that it gave me chills! 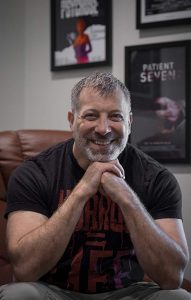 So, it’s obvious I’m a fan of this film, and it was cool to get a chance to talk to writer/producer/director Barry Jay about the making of the film and his inspirations for the subject matter.

Los Angeles Zombie Girl: Thanks for talking with me, Barry! What was your inspiration for ASHES? It said based on a true story.

Barry Jay: Thank you for asking me to do this! ASHES is inspired by true events, yes.  My Aunt Marion passed away in a nursing home in Akron, OH and my sister received a call that her ashes were on the way because my sister was next of kin. After hearing about my sister moving them from closet to closet, I laughed, and my wheels started turning.

LAZG: Is this your first feature film?

BJ: This is my first feature as writer and director.  I have other films out which I co-wrote — THE CHOSEN and PATIENT SEVEN, both produced by Terror Films.

LAZG: Everyone was incredible. How did you put together such a perfect group?

BJ: I love hearing you say that. I was very lucky! Casey James Knight (Chip) is a friend and met him holding auditions for THE CHOSEN — he’s super talented and also helped with casting.  Yumarie is a friend of his — he sent her in to audition and she blew me away instantly.  Elizabeth Keener and I were neighbors for 10 years and became fast friends. She was also in THE CHOSEN and I like calling on her for anything I do.  Jeremy, Damien and Michael Shacket are clients of the exec producer Carl Rumbaugh and I was so lucky to get them. Parker (Ronnie) is a friend of Laura Lieffring who was makeup head and Emma Mumford (young Ellyn) is like a Goddaughter to me, I was literally there the moment she was born, and it was so awesome to cast her in my first feature.  The rest came from auditions — Melinda DeKay also knocked it outta the park when she came in. I turned to the casting director and said, “should we just send everyone else home?” Her evil yet sincere laugh as Aunt Marion reveling in her revenge was unbeatable — she is a consummate actress; it was an honor to see her bring my Aunt to life on screen. 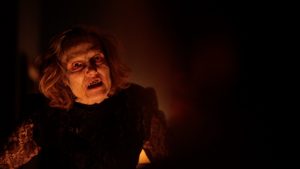 LAZG: How long did it take to shoot the whole film? Where was it shot? (LA area I assume)

BJ: 18 days and yes it was in LA, North Hollywood to be specific. A house we rented on a location site — I ended up good friends with the couple that owns the house.

LAZG: You know I love the film, but my only confusion was who the family was talking to when they were on the couch.

BJ: Yes. I was watching Modern Family one day and I really liked the unseen/unexplained documentary interviewer thing and thought to myself that I hadn’t seen a horror movie do that… when I decided to write Ashes it felt like the perfect way to go about explaining Aunt Marion’s backstory and my family’s relationship with her.

LAZG: Oh…. that totally makes sense, I just let them talk to me. LOL. So, the comic relief really balanced out the horror. That was so cool. What made you decide to do it that way?

BJ: Thank you — honestly, I didn’t decide to do that… I originally sat down to write a horror movie but since it’s my family I found myself laughing while writing and going with it. That’s when I decided to just let the natural humor flow… I wasn’t trying to be funny, some things just were, and I figured, why not — leave it.

LAZG: Is there a backstory to Aunt Marion? Why was she such a strange woman?

BJ: Aunt Marion was a character.  Her backstory, for the most part, is true: She was with Uncle Don alone when he passed away and sat with him while she called for help. She didn’t drive, never had kids, substitute teacher — she also married out of our religion which is no biggie now, but in our family way back when; she was a first. She also moved away to OH… the only family member to leave NY and do that. We all lived very close to each other, except Aunt Marion.

I don’t know why she was strange, but she definitely marched to her own drummer. Often detached from what was going on, she looked like she never combed her hair or cared about how she applied her lipstick. In younger photos, she seemed more put together. I often found her sitting in a chair staring out the window with a book in her hand not moving for twenty minutes. She was kind but I’ll never forget one day when I went to visit my grandmother and Aunt Tressa down the road and Aunt Marion was staying there. Outside the door I heard an angry Aunt Marion screaming at Aunt Tressa — a voice I hadn’t heard from her before.

LAZG: In the film, why did Aunt Marion get into witchcraft? Was she planning her revenge on the family for a long time?

BJ: She was fascinated with the supernatural. I think she planned to one day get back at them the day Jay scared her too much.

LAZG: What was Marion and Gail’s true relationship? Was she simply her caretaker, or was she just as evil as Aunt Marion?

BJ: So, this is a true part of the story I had to elaborate on… in my Aunt’s obituary Gail was mentioned as her special friend.  We didn’t know Gail and not sure what Aunt Marion meant by a “special” friend.

LAZG: Wow, I love how much of this was based on an actual true story! So, what was it like on set? Everyone did such a great job.

BJ: Thanks — the cast and crew were amazing! The energy was upbeat and fun — we all loved being there and working together. We were either on schedule or ahead of schedule daily and the 12-hour days flew by! There was a lot of laughter on set, and we all loved watching it come to life. 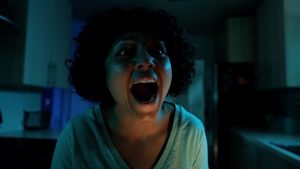 LAZG: Is there a message in ASHES? Being able to understand what it’s like to get old? And maybe to know how wrong they were to make fun of her?

BJ: Yes, you are spot on with that … as well as taking a good look at the ones around us, maybe looking inside them to know they have a story too — and it’s not just surface we should be looking at.  Through the writing of Ashes, I learned to love, understand and respect Aunt Marion.

LAZG: The SFX makeup was fantastic! How did you find your team?

BJ: Well Laura Lieffring is the makeup head and she brought in Sioux.  I called them Laura-Sioux — they are an incredible team to work with, personally and professionally they are a joy and SO talented — I love their work and they also worked on my second film KILLER THERAPY which is in post now. LAZG: What was your favorite behind the scenes moment in ASHES?

BJ: Hard to say just one: but seeing Aunt Marion all made up for the first time gave me chills and seeing Keener in full-blown Aunt Marion makeup at the end also sent me reeling…  Of course, I loved seeing Aunt Marion’s real ashes in the scene where Ellyn and Melanie take their first look at them. Classic.

LAZG: What projects do you have coming up in the future?

BJ: My next film is called KILLER THERAPY and features Adrienne King (Friday the 13th), PJ Soles (Carrie, Halloween), Daeg Faerch (Rob Zombie’s Halloween), Thom Mathews (Return of the Living Dead and Friday the 13th VI) and of course Elizabeth Keener… it focuses on a young boy who is angry, abused and bullied who grows up going through a lot of forced therapy — one day he snaps and decides to hunt down and kill all the therapists he blames for messing up his mind and his life.  This one is much darker than Ashes.

LAZG: That sounds amazing! I’m looking forward to whatever comes next from Barry, and I sincerely hope everyone out there gets a chance to see ASHES!

Written, directed and produced by Barry Jay, Ashes arrived on Digital and VOD from 1091 Media on July 9th, 2019