On the prairie no one can hear you scream 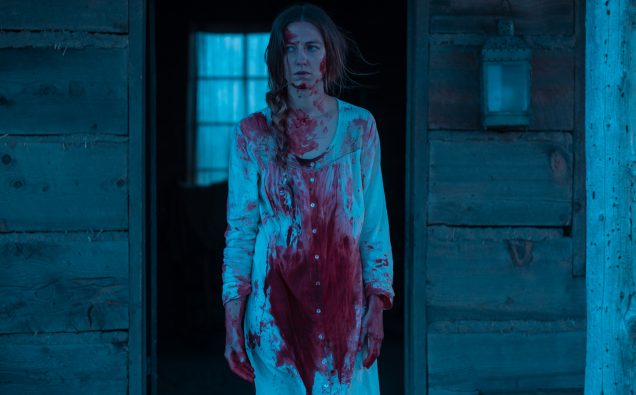 Not too long ago I moved away from a busy urban city to an 1800’s farmhouse that feels like it’s out in the middle of nowhere. I’m not trying to compare this to the desolate isolation one would feel living in a tiny cabin sitting alone in the middle of the plains in 1889. But I do empathize and understand how important companionship is and how loneliness can wrap its cold hands around your heart and put your mind in a state where your imagination runs wild. Humans need other humans and when left alone for long periods of time, our minds can conjure up some weird shit.

Seen from a woman’s point of view, The Wind is a beautiful film that explores that kind of loneliness. An atmospheric supernatural thriller, this wild west tale is so full of amazing moments, that it’s hard to know where to start. Director Emma Tammi and writer Teresa Sutherland’s feature debut tells a story that is jarringly non-linear and yet keeps you glued to the screen trying to figure out what’s real and what’s a hallucination. Sometimes that got a bit confusing, but have no doubt, this ominous, disturbing, dusty and intense film is worth the watch. 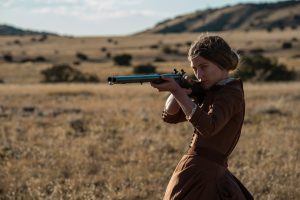 Synopsis: Lizzy is a tough, resourceful frontierswoman settling a remote stretch of land on the 19th-Century American frontier. Isolated from civilization in a desolate wilderness where the wind never stops howling, she begins to sense a sinister presence that seems to be borne of the land itself, an overwhelming dread that her husband dismisses as superstition. When a newlywed couple arrives on a nearby homestead, their presence amplifies Lizzy’s fears, setting into motion a shocking chain of events.

Set on the American Frontier, the first thing we see is a cabin door with two men fretting in front of it. As it opens, it reveals a woman covered in blood carrying what we know instantly is a baby. The film starts with death, and from there on we must know who and why? The film takes us on that journey from many different angles, backward and forwards. Though honestly, I’m not sure if it was real or all in the mind of the main character Lizzy, powerfully performed by Caitlyn Gerard. (Insidious: The Last Key) 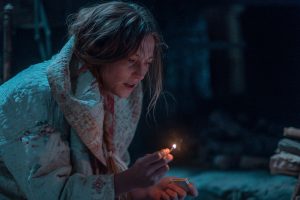 Lizzie Macklin is a frontier wife. Her husband Isaac (Ashley Zukerman) is a nice enough guy, sturdy and strong, but he is often away. They are barely getting by working the land that doesn’t look like it could give them anything. The dust and wind are constant. Lizzie has learned to take care of herself. She cooks, cleans, can shoot a gun and from what we saw in the first scene, can help a neighbor with childbirth. What is surprising right off the bat, is that it looks like the neighbor Emma, has taken her own life and this is a last-ditch effort to save the baby. The story then begins to loop around. Lizzy herself has had a few personal traumas and it becomes unclear, what part of the story is in Lizzie’s imagination. 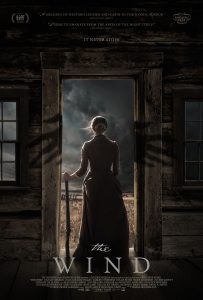 When we go back in time to see how this came about, we meet the new neighbors. Emma (Julia Goldani Telles) and Gideon (Dylan McTee) are a pair of urban twenty-somethings trying to prove to their rich daddies they can survive on the frontier. They are a bit too soft for this kind of life, and Lizzy and Isaac begrudgingly take on the burden of showing them the ropes and look after them as they adjust to the isolation of the plains. People had to be a special breed to make it in a world so harsh. We know how few people there are when Emma asks about church and Lizzie says there aren’t enough people out there for a church. When asked how many that is, she answers four.

At first, it seems a blessing for there to be another couple out there, someone they can spend time with. But when Emma gets pregnant and Lizzy suspects she has been seeing Isaac on the side, Lizzy becomes bitter having lost her own baby in childbirth. Emma then begins to fear that an unknown evil is out to get her and the baby. Are there demons on the prairie? Are Emma and Lizzie going crazy? Or is there really something sinister out there hunting them? 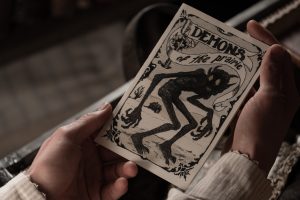 The Wind is a raw film, leaving emotions out in the open, as easy to visualize as looking across the empty plains and seeing the twinkle of lights; the only other house miles away. The American Frontier is a perfect allegory for isolation and cinematographer Lyn Moncrief captures it in a moody and haunting manner. A western at its core, a thriller and psychological horror too, The Wind still falls into a category all by itself. Emma Tammi and Teresa Sutherland have brought us a fantastic story of loss and pain. Like The Witch, which is also about how isolation and loneliness can make you insane, The Wind tells it’s own unique genre-bending story and I really loved the quiet dread I felt, waiting desperately for the demon to reveal itself.

The Wind will blow into theaters on April 5th 2019 from IFC Midnight.