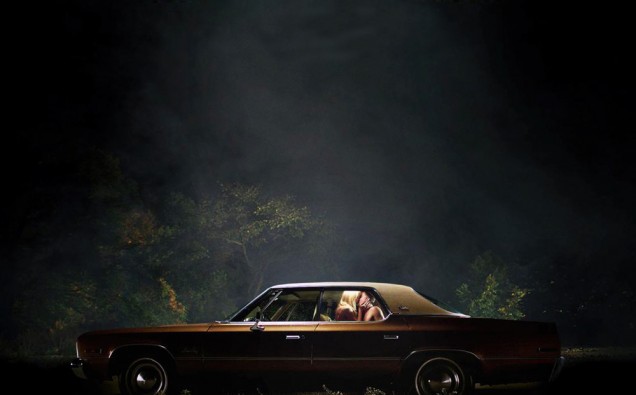 It’s been a good past couple of years for movies, because it looks like the 80s are making a comeback. With The Guest, Maniac, & now It Follows, it seems like moviemakers are starting to miss synthesizer soundtracks as much as I do. I’ve talked about how much I love all that stuff too many times already, though. No, this time I’m just here to talk about a neat little gem I saw recently & how much I loved.  It Follows is probably my favorite movie I’ve seen in theaters so far this year. It’s smart, creepy, well-paced, & extremely effective in what it’s trying to do. What is that, you ask? Why, my dear friend, that’s making a love letter to the horror movies of old, where not everything needed to be explained to you, & teenagers seemed to live by themselves despite only be sixteen. Simpler times, simpler times.

The film follows a teenager played by Maika Monroe (The Guest, Flying Monkeys) as she’s stalked by a supernatural presence after being cursed. How did she get cursed? Why, by having sex with someone who was also cursed, of course! The curse is passed on by having sex, causing it to stalk whoever had sex last.  However, once it captures the person, it kills them then proceeds to go after the previous person. Luckily, it can only walk, so you can easily outrun it…but it’ll catch up sooner or later. Unluckily, only people who are cursed can see it.  Soon, everything becomes a slow game of cat & mouse as our heroes attempt to find a way to escape from its killing spree.

The story is very simple, & not a lot is explained during the course of the film. If you ask me, this is a good thing because it leaves a lot of mystery, & keeps the audience speculating way after the movie has ended. Where did “It” come from? Why does “It” do what it does? Was “It” human once? Or was “It” always what it was? Lots of questions, little to no answers.

All of the characters were really well performed during the entire course of the film. Of course, the biggest highlight is Maika Monroe, who I just saw star in The Guest not too long ago. While I thought she did a decent job in The Guest, I have to say that she hit the nail on the head in It Follows. Her acting was perfect, as was the rest of the cast, but she was the shining star of the bunch. She gave the classic final girl survivor vibe through the entire film, & then some.

“It”, the monster of the film, was done in a fresh way & made especially creepy. Part of this I’m sure was because of the low budget. Still, it’s very effective, & instills a feeling of paranoia in every scene that comes after it’s introduced. The less I say about “It”, the better your first viewing of the film will be. Trust me.

The cinematography (which I don’t usually talk about, but will make a special case this time) is beautiful. The style, the angles, the vibrant colors; all of it makes this movie extremely appealing to the eye. One scene in particular (my favorite, actually) is seen the trailer for the film, involving a pool of water & blood. It’s the best shot in the movie, & the build up to it does not disappoint. As far as the effects go, there’s not a lot to talk about. It’s very minimal in that regard, but doesn’t hurt the film in any way.

When it comes right down to it, this is a really well made movie. It’s entertaining, it’s fun, it’s creepy, & it doesn’t let down at all. It also has one of the best suited endings I have ever seen in a flick. If it’s playing in your town, go see it. It’s a hell of a good time.